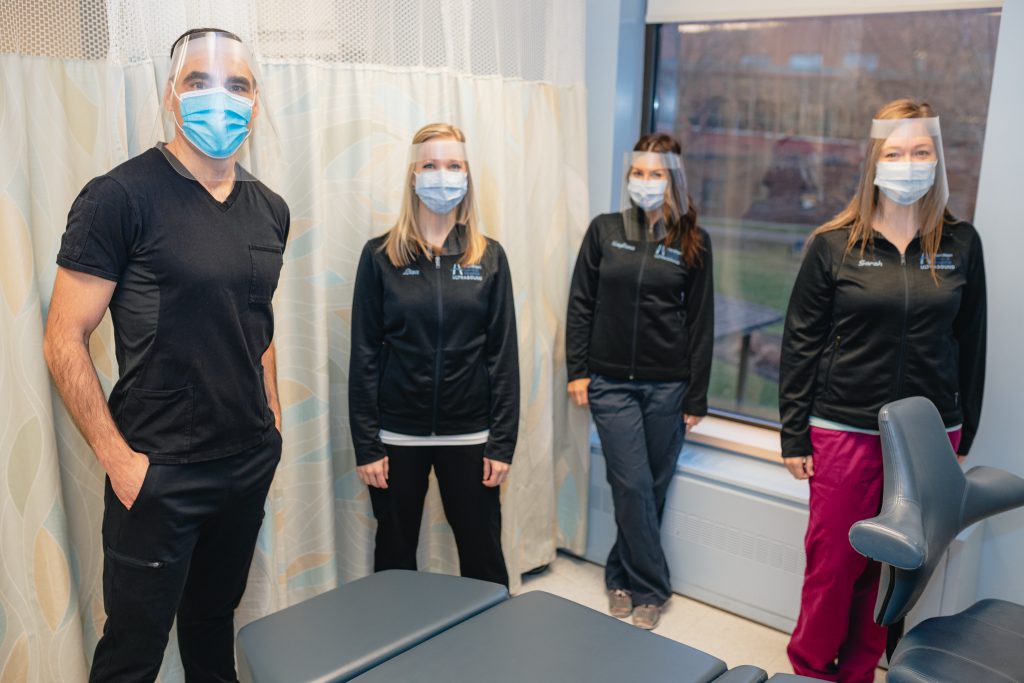 “It was just an idea. We had no expectations of it becoming real.”

Those are the words of Lisa Billone and Sarah Allred, ultrasound technologists in the Department of Diagnostic Imaging at Hamilton Health Sciences (HHS). At the start of the pandemic, when much was still unknown about COVID-19, Billone and Allred came up with the idea of an extended face shield to wear during interactions with patients.

“This was in April. At the time, we didn’t know how the virus was spreading,” explains Billone, who works at Hamilton General Hospital (HGH). “We had some concerns about the lack of coverage from the face shields we were using at the time.”

Interactions between ultrasound technologists and their patients are unique compared to other patient-facing hospital staff. The patient lays on a stretcher with the technologist seated on an elevated chair beside them. While viewing the monitor of their ultrasound machine located beside the head of the stretcher, the technologist uses a handheld probe placed on the patient to acquire images. This means that, while within arm’s reach during the entirety of the exam, the sides of the technologist’s face and neck are exposed to the patient.

“We noticed that the shields we were using left a big gap between the chin, neck, and the top of our gown,” says Allred. “Patients are lying down, looking up at us; we felt unprotected in that area.” 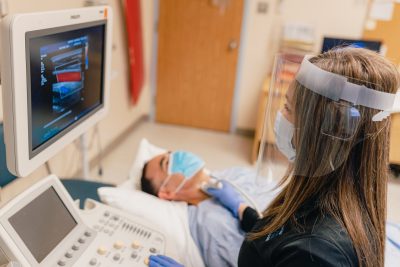 Sarah Allred demonstrates the features of the extended face shield. Dr. Colapinto acts as a patient.

“Lisa and Sarah were looking to develop personal protective equipment (PPE) optimized for ultrasound technologists,” explains Colapinto. “I thought it was outstanding and wanted to support them in any way I could. They spoke to the PPE educators at HHS about their idea and with their consent, we emailed the McMaster Manufacturing Research Institute (MMRI) to see if they would be willing to lend their engineering expertise; they got back to us with an enthusiastic yes within an hour. It was remarkable.”

Kaylana Parente, also an ultrasound technologist at HGH with Billone and Allred, joined the team to help translate ideas into illustrations for discussions with MMRI. “Kaylana is exceptional with artwork and design,” says Colapinto. “She really helped to kick start the process.”

The value of local partnerships

Steve Remilli and Brady Semple work at the MMRI. When they read the Ultrasound team’s email, they immediately leaped at the opportunity. “Making a face shield for a hospital setting wasn’t something we were familiar with, so we never expected to be involved in something like this before. Our department generally works on metal cutting,” explains Remilli, project manager at the MMRI. “But we already had some of the materials and equipment so that’s how we were able to put it together so quickly.”

Semple, a senior research engineer at the MMRI, spent about a week developing the original design followed by a few more days creating the prototype by hand. After roughly three weeks of some back-and-forth between the HGH Ultrasound team and MMRI, tweaking the design for comfort and safety, the finalized design of the extended face shield was complete. Allred, Billone, Parente, and Colapinto then submitted the prototype to the HHS PPE Task Force for approval. “It turned out that Anesthesia and Medical Reprocessing at HHS were interested in similar protection,” says Colapinto. “It took off from there.” 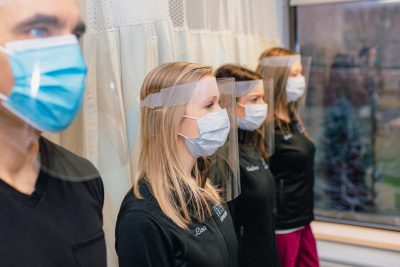 The extended face shield is being used by all ultrasound technologists across HHS.

“They jumped right on it”

Bryan Herechuk is the Director of Quality and Value Improvement at HHS. When the ultrasound team and MMRI agreed on a set prototype, the MMRI team had to resume projects that were delayed due to the pandemic. Herechuk swooped in to help get the extended face shield moving along. “I reached out to one of our vendors who were already providing standard face shields for us and asked if this is something they would consider producing,” Herechuk explains. “They jumped right on it. They developed a prototype within a day of me sending them the drawings.”

It was great to be able to help in this pandemic

Dave Tassé, sales manager at the local Burlington campus of Printex Transparent Packaging, was more than happy to get involved. “I’m a Hamilton guy. My wife works in a nursing home, too, so this project was really important to me,” says Tassé. “At the time we got the request, we were designing face shields for children. I noticed we could take that innovation and put it into the extended face shield for HHS. I asked Bryan if they would be okay with it and he said yes. So we used that innovation, with slight modifications to their design, and brought the second prototype to HHS and that was it.

“It was great to be able to help in this pandemic,” adds Tassé.

Remilli says this project is a great example of collaboration between various areas of expertise. “This really shone a light on how groups of experts in their fields can play together very quickly. Everything came together so naturally.”

Ultrasound technologists across HHS have been using the extended face shields since last November. Allred is thrilled with her coworkers’ reaction to their new PPE. “The team loves them. They say the shields are easy to use and they’re reliable. We work with a lot of COVID-positive patients, so we feel safer with the shields on.”

Allred and Billone’s passion for ultrasound and providing care to patients has always been at the forefront of their minds – not dreaming up a new innovation. But, as Billone points out, sometimes a little encouragement is all you need. “You come to work every day and do what you do. I never thought I would ever be involved in something like this.

“It is inspiring to know that if you have an idea, the hospital will support you in bringing it to life.” 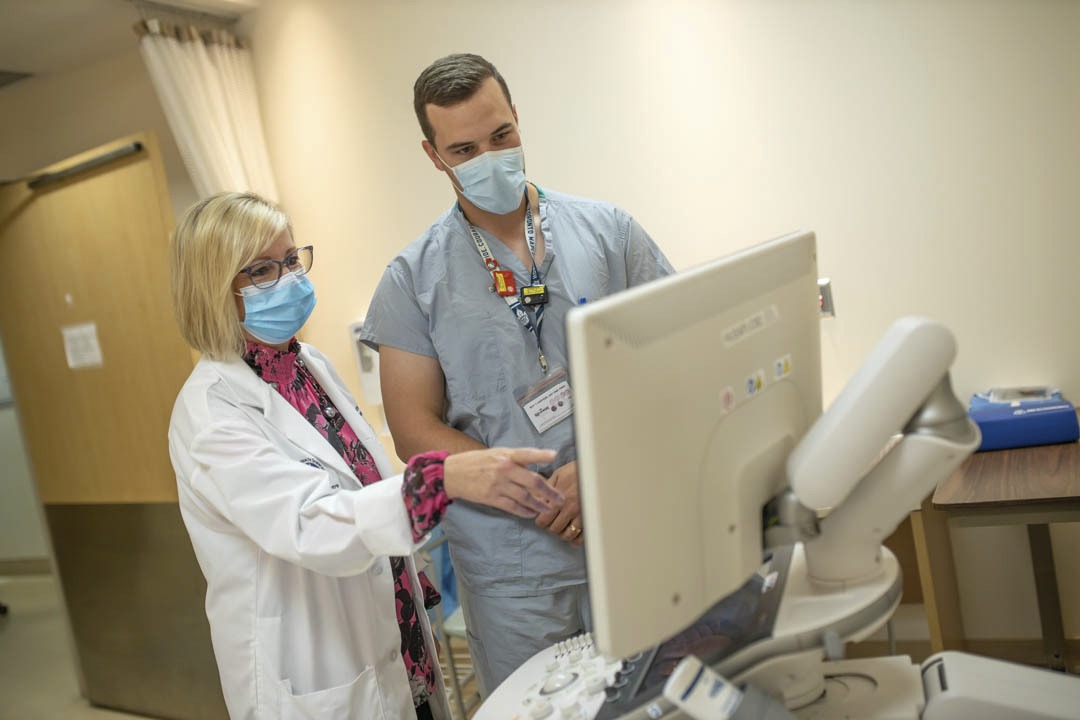