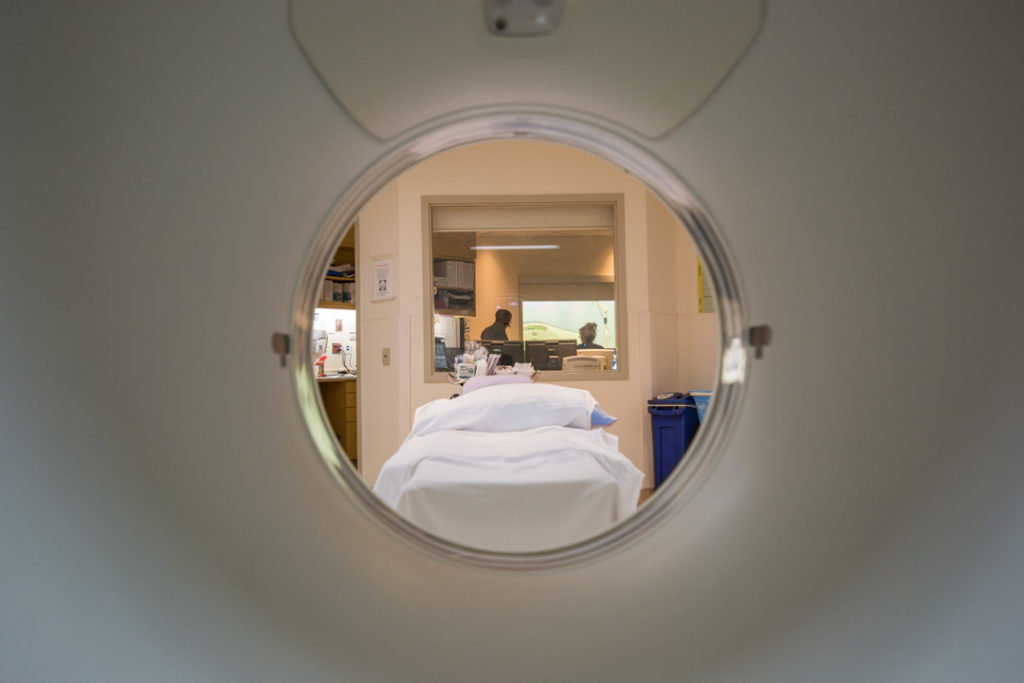 A new spin on an old test: rethinking the D-dimer

What if we could reduce unnecessary CT scans by 60 per cent? How much money would be saved? How many patients would avoid potentially harmful radiation exposure?

Testing a new way to test for pulmonary embolism

The thromboembolism service at Hamilton Health Sciences (HHS) is pioneering a new method to accomplish this reduction, and has teamed up with the emergency department (ED) in a unique research partnership to do so. They are investigating a new way of interpreting diagnostic tests for a pulmonary embolism (PE), which is a blockage in an artery of the lungs. They hope that they will be able to divert more patients from having CT scans by more accurately identifying patients who do not have PE using a simple blood test. Dr. Clive Kearon, a thrombosis specialist and program director of the Clinician Investigator Program, is leading the research, which is funded by the Canadian Institutes of Health Research (CIHR).

“If we could reduce the number of CT scans without missing this important diagnosis it would be great for patients and the health care system.” “When patients come in to the emergency department with a possible pulmonary embolism, we have to determine whether they have that, or if something else is causing their symptoms,” says Dr. Kearon. “The standard method does a good job, but we end up having to do a large number of CT scans, and most of these scans are normal, meaning they don’t have a pulmonary embolism. If we could reduce the number of CT scans without missing this important diagnosis it would be great for patients and the health care system.”

75 per cent require further investigation, which generally involves a CT scan. Only 7% of these scans are positive for PE.

Ruling out a diagnosis

When a patient comes to the hospital with symptoms of a possible PE, doctors attempt to eliminate that diagnosis using a blood test called a D-dimer. It almost always gives an abnormal result when the patient has a blood clot, but with the current way of interpreting its results, it rules out PE in only 25 per cent of patients. That means 75 per cent require further investigation, which generally involves a CT scan. Only 7% of these scans are positive for PE.

Possible because of partnership

In order to explore an improved method of analyzing test results, Dr. Kearon has enlisted the help of Dr. Kerstin deWit, along with her colleagues in the ED, to use and evaluate a new way to interpret the D-dimer blood test results. Dr. deWit has trained ED staff and physicians in the new method, which allows pulmonary embolism to be “ruled-out” using the D-dimer blood test in many more patients, provided the ED physician also thinks that the patient is unlikely to have a thrombosis. The partnership between the ED and the Thrombosis Service is crucial to the success of the study. Using the new method, they are able to rule out PE in 40 per cent of patients without doing a CT scan, a significantly higher portion. In the study, these patients are then closely followed to make sure they don’t run into problems because a PE was missed. By not having a CT scan, patients avoid unnecessary radiation and dye that can be harmful to the kidneys.

“It will change testing for pulmonary embolism across Canada and beyond.”

“If we can verify that this method diverts patients away from unnecessary CT scans and is safe, the study’s findings will have important long term benefit,” says Dr. Kearon. “It will change testing for pulmonary embolism across Canada and beyond.” Drs. de Wit and Kearon, and their colleagues in the ED and Thrombosis Service are also investigating a similar method for improving the diagnosis of deep vein thrombosis, blood clots in the leg that lead to pulmonary embolism.

This research is an example of how Hamilton Health Sciences is contributing to a healthier, wealthier, smarter Ontario as part of the Council of Academic Hospitals of Ontario.