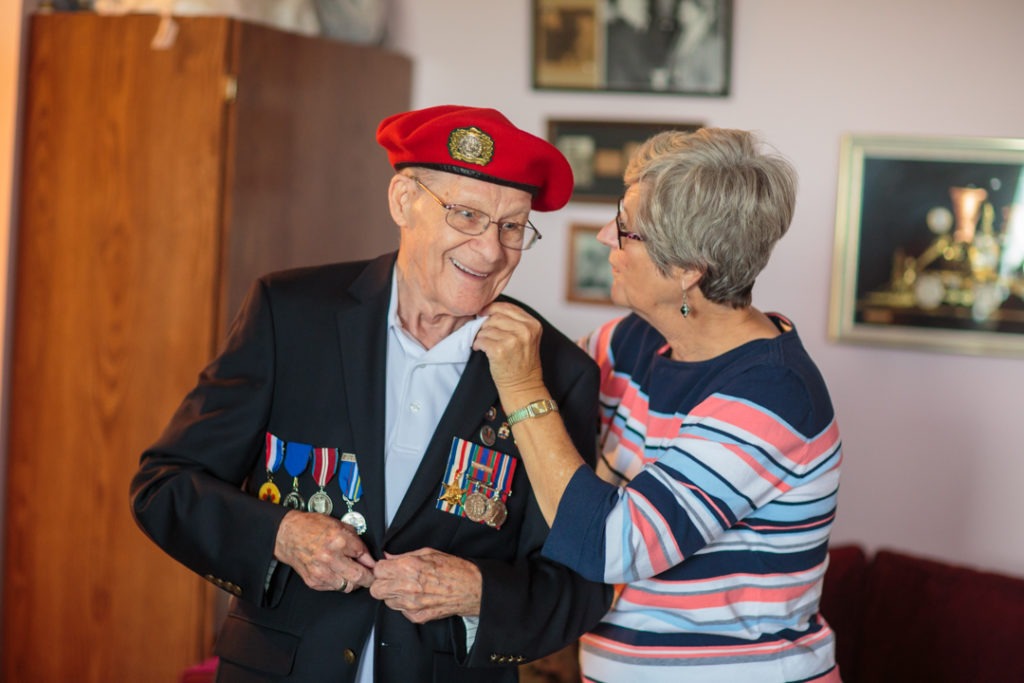 An honour to care for him: Celebrating our veterans

As soon as he was able

John Brown has worn the scars of World War II on his body for 71 years.

He volunteered to join the army when he was 19-years old. “I wanted to go,” says Brown. “My dad and brothers were in the army. I wanted to do my part. I was prepared to die if that’s what it took.”

Having spent the better part of his youth as a cadet in The Argyll and Sutherland Highlanders, military training came easily to Brown. During his course at Camp Borden he took top prize in the marksman competition, earning a carton of cigarettes—not much of a win, since Brown didn’t smoke.

“I was prepared to die if that’s what it took.”

On his way overseas

He shipped out to Holland in September, 1944. “The boat ride was awful,” he remembers. “Everyone was seasick. We had to sleep in hammocks piled on top of each other.”

The threat of injury or death didn’t scare Brown. He felt strongly that he was doing the right thing and was willing to risk life and limb for it.

On February 11, 1945, he was confronted by that reality. His patrol party was tasked with retrieving an informant from an enemy camp. They set out in the cover of night and captured the man easily. It was on the trek back to home base that the mission grew hairy. Brown accidentally stepped on a mine. It blew his foot right off. In the shower of machine gun fire that followed, another soldier hit the ground. His hand exploded on contact with a second mine. When the bullets slowed, the troop retreated, only to discover four of their men were missing. Their bodies were never found.

“I think about it sometimes,” Brown says. “That they died and I just lost my leg. So many men got it worse than I did. They gave their lives. It’s important that we honour them.”

Returning as a different man

When he returned from the war, Brown had a portion of his left leg amputated, and was soon fitted for a prosthesis. He’s lived more than three quarters of his life with an artificial leg, and doesn’t really think twice about it. It’s just part of him, like the rest of his memories from the war.

“So many men got it worse than I did. They gave their lives.”

Danial Cribbs is a prosthetist in Hamilton Health Sciences’ Prosthetics and Orthotics Department. He made and fit Brown’s current prosthetic leg. For him, each appointment with Brown is a reminder of the sacrifices our veterans made. “It’s an honour to care for him,” Cribbs says. “He is an incredible man.”

To Brown, Remembrance Day is a time to reflect on his own experiences in the war, but also a time to consider what our veterans mean to us. “There aren’t many of us left,” he says. “We need to honour the ones who are still here, and remember the ones who aren’t.”

St. Peter’s Hospital (SPH) celebrated Remembrance Day with its annual ceremony for patients, families and staff. Seven SPH patients who served in the war were honoured with certificates of recognition.