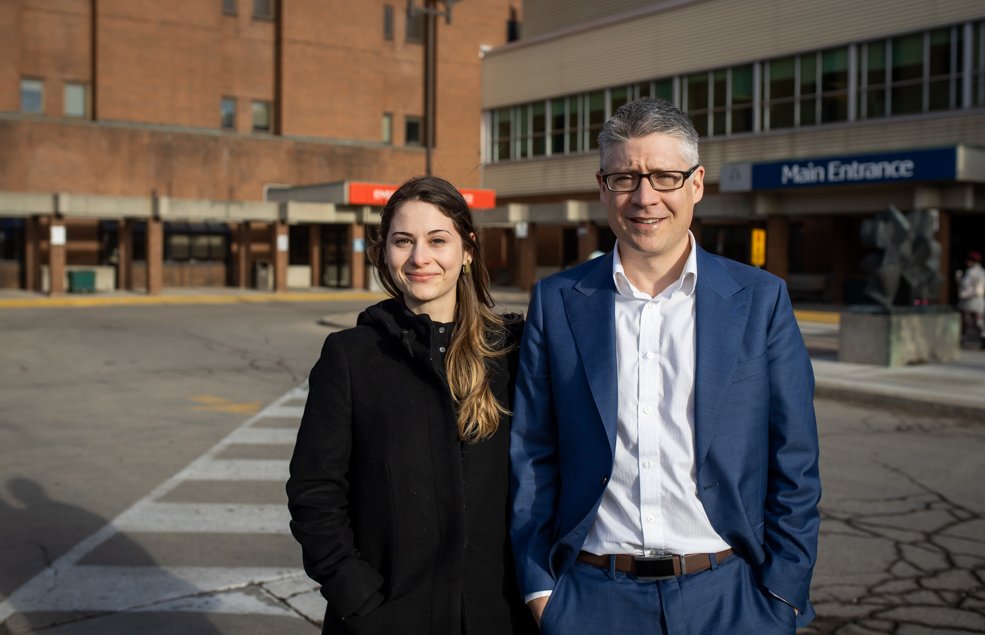 Drs. Robin Lennox and Richard Whitlock are co-leads on a new project that aims to help patients with IV drug addiction step off on a better foot following surgery.
Stories

Pictured above: Drs. Robin Lennox and Richard Whitlock of Hamilton Health Sciences are leading a new initiative that aims to provide better support for patients with IV drug addiction once they leave the hospital.

For some people in our city, a proposed new project called “Second Heart” will mean getting a second chance at a healthier life.

In recent years Dr. Richard Whitlock, cardiac surgeon at Hamilton Health Sciences (HHS) and his team at Hamilton General Hospital have seen an increase in the number of patients needing surgery for a serious heart infection caused by intravenous (IV) drug use.

Endocarditis is an infection of the inner lining of the heart valves that can damage the heart and, for some people, requires life-saving surgery. Research estimates that as many as 10 per cent of deaths among people who use IV drugs involve endocarditis.

More and more often Dr. Whitlock and his team at Hamilton General Hospital, our region’s hub for heart care, perform surgery to repair damage caused by endocarditis in the hearts of people struggling with IV drug addiction. Too often, they recover from surgery and return to the circumstances that brought them to hospital in the first place, with little support to navigate toward a better path. That’s why Dr. Whitlock has teamed up with other professionals from across the community to form a new initiative aimed at bridging the gaps between hospital and the community for this vulnerable patient population.

The “Second Heart” project, currently proposed as a pilot study, would unite healthcare and social service providers to support a better transition home from hospital for patients after their surgery. The goal is to curb drug use and the need for repeat surgery and, ultimately, to prevent death.

The Second Heart pilot would involve health system navigators and peer support workers to connect and guide patients to community-based services after their operation, and to help them over some of the socioeconomic hurdles, such as housing, that may prevent a good recovery from surgery and addiction.

“We have a responsibility to help give our patients a second chance.”

Dr. Robin Lennox, co-lead on the project and co-head of inpatient addiction-medicine services at HHS and St. Joseph’s Healthcare Hamilton, says that as many as half of endocarditis patients don’t have a family doctor, which further complicates their ability to navigate services that could help them.

“We have to recognize that these patients that are getting these infections are just as deserving of high quality health care that’s targeted toward their needs,” says Dr. Lennox.

Currently, the team is making a proposal for funding that would support a pilot project to study whether increased collaboration between surgical and hospital teams and community providers leads to better outcomes in patients with endocarditis caused by IV drug use.

“As healthcare professionals, we always strive to treat the underlying cause of disease,” says Dr. Whitlock. “That’s what we fail to do with these individuals, which is to treat the addiction and put the right supports in place to encourage a healthier future.”

“We have a responsibility to help give our patients a second chance.”