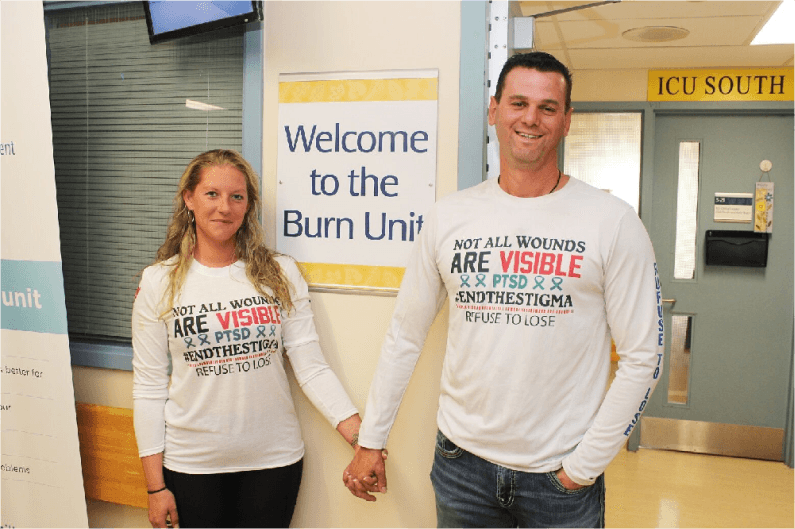 Back in action after the fire

Constable Phil Sheldon of Beamsville was attempting to rescue a woman from a burning home in July 2015 when the house exploded, resulting in third- and fourth-degree burns to 50 per cent of his body.

After being stabilized at his local hospital in St. Catharines, he was flown to Hamilton General Hospital (HGH) and admitted to the Burn Trauma Unit (BTU). Phil underwent a number of skin grafts, with skin from his back and stomach grafted onto his hands, arms and legs.

“I was in a coma for about a month before I awoke to extreme pain, which required sedation to control,” he says. “That’s when I began working closely with the multidisciplinary team in the BTU.”

Phil required respiratory assistance for his damaged lungs, and he worked closely with therapists to regain movement throughout his body.

“Everybody at the unit was phenomenal, going above and beyond,” recalls Phil. “They saved my life, and I’m alive today because of the amazing care I received.”

After his discharge from HGH, Phil continued to recover both physically and emotionally.

“The injuries I sustained were more than skin deep,” says Phil. “I experienced flashbacks, nightmares and anxiety attacks because of the experience. My support system of family and friends helped me through the difficult times.”

He enjoys speaking about his experience and spreading awareness about post-traumatic stress disorder (PTSD) by speaking at various events.

“I wear my scars proudly now.”

“My wife Tanya taught me that I could take something negative and turn it into something positive by helping others. I hope that other people who have been in similar circumstances can learn from my experience. I’ve shared my story with new recruits of the Niagara Regional Police, and at events to support patients and families dealing with PTSD.”

No obstacles can stop him

In December 2018, Phil saw a television commercial for a 15-km Spartan Warrior Race which involved a challenging obstacle course. One of the obstacles in particular caught his attention.

“Part of the race involved jumping over a fire,” Phil explains. “I immediately decided to sign up for the race because it gave me something to focus on, and it was one way I could confront my fears head on.”

Phil and Tanya trained extensively for the race, which took place in June 2018. Their team raised $13,000, which they donated to Hamilton General Hospital Foundation in support of the BTU.

“I wear my scars proudly now,” says Phil. “I’m able to hike and golf again, and I’m no longer afraid of wearing t-shirts and shorts that show off my scars. I have so much to live for, and I’ll always be grateful for the care I received at HGH.”