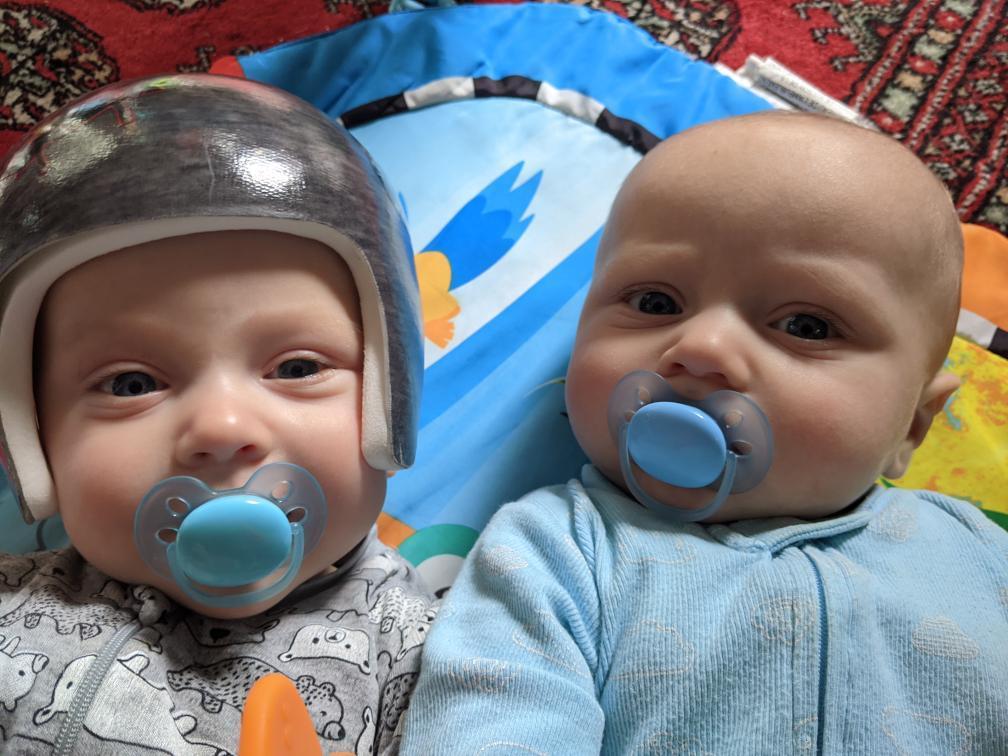 Twin boys Calvin and Pierce McKay pictured here in October 2020. Calvin developed a flattened spot behind his left ear, leading to the use of a helmet made by the orthotics department at McMaster Children’s Hospital’s Ron Joyce Children’s Health Centre.
Stories

A slam-dunk success for Calvin

Identical twins Calvin and Pierce McKay were born in May 2020 – the second and third babies for parents Catherine and Andrew. The Hamilton couple were elated to welcome not only one, but two happy, healthy children into the world during a time of uncertainty.

“The thought of giving birth during a pandemic was stressful, to say the least,” says Catherine. “There were so many unknowns about the effect COVID-19 has on pregnancy. However, our delivery was planned and we had a positive experience. In the end, we just wanted to bring home our babies safely.”

When the McKay twins were born, just a little puff of blond hair on Calvin’s head is what his parents relied on to tell him and his brother apart. But after the babies’ first three months at home – something changed. “We noticed Calvin’s head began appearing less round, especially compared to his brother’s,” explains Catherine. “I contacted our family physician and he referred us to the orthotics department at Ron Joyce.”

Francine Coxon is a certified orthotist at McMaster Children’s Hospital’s Ron Joyce Children’s Health Centre (RJCHC). “I first met Calvin and his mother in September 2020 when their doctor referred Calvin for a plagiocephaly assessment,” says Coxon. “There was a flat spot behind Calvin’s ear and his parents were worried it was getting worse.” 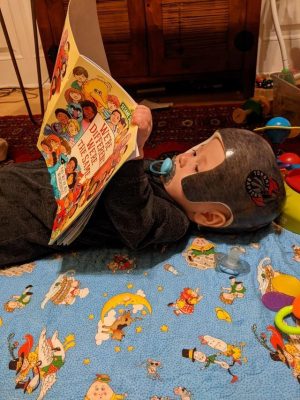 Calvin’s parents are fans of the Toronto Raptors, which is reflected in his helmet design.

Positional plagiocephaly, as the condition is called, is the change in the shape of an infant’s skull due to external forces. It’s common among babies who lay in one position for an extended period of time. It can sometimes be present at birth, but more commonly develops when the infant is one or two months old. “The causes of plagiocephaly can vary,” explains Coxon. “We see it in babies who have a tightness in their neck muscles – called torticollis – or sometimes it’s as simple as having a baby that’s a heavy sleeper.”

During an assessment, orthotics staff educate parents about the condition, and both staff and parents discuss the potential use of a plagiocephaly helmet.

“We measure the baby’s head to help us classify the plagiocephaly as mild, moderate of severe. This can be used to balance out the parent’s visual perspective and help them decide how they wish to move forward,” says Coxon.

Catherine went into the assessment unsure about whether or not Calvin’s condition was something that could be treated. “Before the assessment, I was worried his plagiocephaly couldn’t be fixed and that he’d be compared to his brother for the rest of his life,” she says. “Francine eased my anxiety by discussing possible options. My husband and I decided that the helmet was the right option for us.”

We the North, helmet style 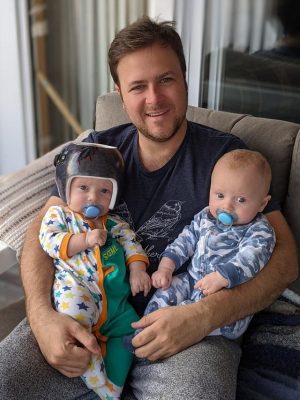 Calvin and Pierce with their dad, Andrew. After only wearing the helmet for two months, the flattened spot behind Calvin’s ear began to round out.

Once the decision was made, Coxon took a scan of Calvin’s head to help fabricate the helmet. Then, it was time to work on the design. Matt Durrer, orthotic technician at the RJCHC, joined the assessment to discuss design options with Catherine.

“I was overwhelmed, so he began asking questions about my likes and interests to narrow down options,” she said. After learning Catherine and her husband, Andrew, are Toronto Raptors fans, Durrer pulled some ideas together to create a helmet that represented the family’s ‘We the North’ love.

“I started getting excited as it was coming together,” explains Catherine. “I remember thinking, ‘this is actually happening!’” About a week later, Calvin’s helmet was ready. “He looked like a doll in it. I was overjoyed with the outcome.”

Once a baby’s helmet is fit, the clinic will see the patient regularly until the end of treatment. Follow-up appointments include re-measuring the baby’s head and making changes to the helmet to encourage further correction. There was a little redness at the start of Calvin wearing his helmet but was adjusted the next day.

“Francine was quick to respond to my messages,” says Catherine. “The helmet was easy to clean, too, which was important because Calvin was wearing it 23 hours a day. It sounds like a long time, but he wasn’t bothered by it at all.”

“After wearing the helmet for only two months, Calvin’s head was in the normal range. I was not expecting such noticeable results so quickly,” says Catherine. “After seeing the change I began crying in the examination room. Francine was so caring despite being unable to hug or offer a shoulder due to the pandemic. It was wonderful to have her celebrate our success with us.”

“I am thankful that even during a pandemic, these brave individuals are out there wanting to help.”

It was another two months before Calvin’s head shape rounded out a little more, the time also allowing for Catherine’s anxieties to ease. She admittedly had a hard time letting go of the helmet, but as the new year came so did the decision to remove Calvin’s helmet. On January 6, Calvin was helmet-free.

“Treatment ended earlier than expected which is a real testament to the work that Catherine and Andrew put in to consistent helmet wear,” says Coxon.

What started out as a nerve-wracking experience for Catherine and Andrew ended with joy. “Everyone at Ron Joyce was exceptional,” says Catherine. “I am thankful that even during a pandemic, these brave individuals are out there wanting to help.” 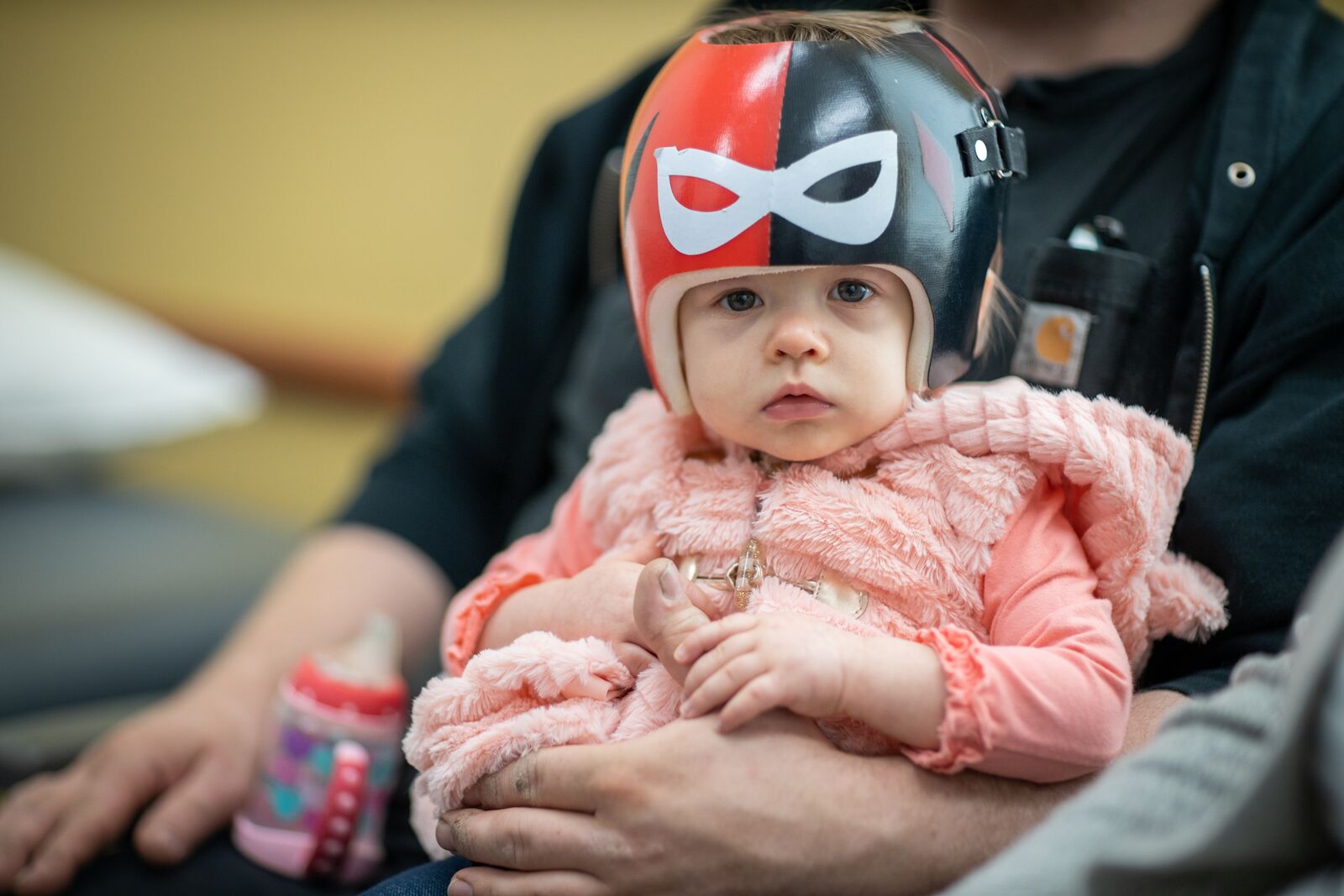 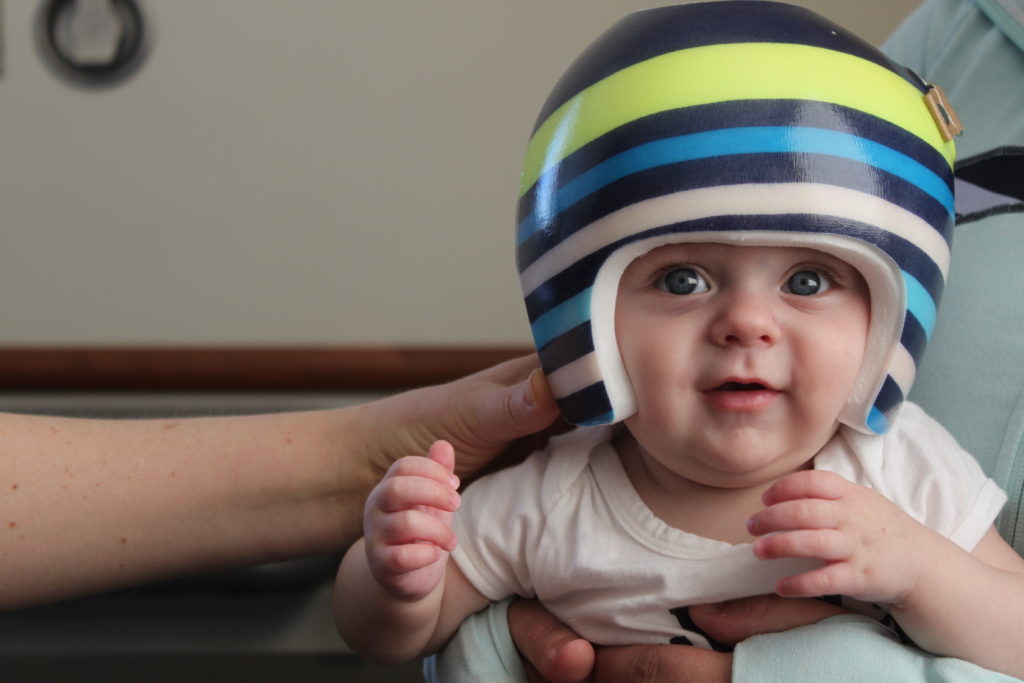