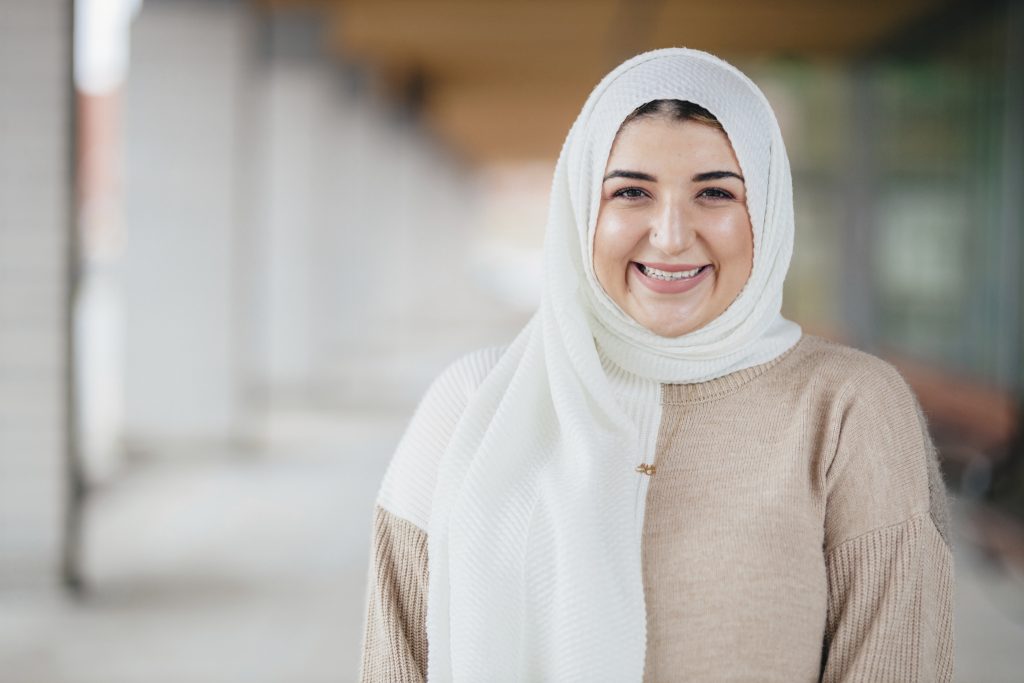 Hamilton Health Sciences (HHS) social worker Nagham Azzam shines a light for children and families in the Hamilton community. She works with children and their families at McMaster Children’s Hospital’s Ron Joyce Children’s Health Centre (RJCHC), and helped to establish a non-profit agency more than five years ago.

A support to families of Ron Joyce Children’s Health Centre

Azzam is a social worker in the Developmental Pediatrics and Rehabilitation program at RJCHC, supporting children with developmental disabilities and their families. Her role includes counselling families through challenges, applying to government funding, and engaging in different forms of advocacy such as education or immigration efforts.

She transitioned to her current role at RJCHC in 2018, after first working on the medicine unit at Hamilton General Hospital.

Azzam is passionate about supporting children and their families and has found that her fluency in Arabic has come handy in her role at RJCHC. “When I crossed the road to RJCHC, there were so many Arabic-speaking families with complex needs,” says Azzam. This has allowed her to support newcomer and refugee families in a language they understand and set them up with the resources they need in Canada.

Radiating light in the Hamilton community

“Mishka” is the Arabic word for a niche in the wall where lamps are placed to provide light to a surrounding area.

That is the word Azzam built her non-profit agency on. Called Mishka Social Services, the agency’s purpose is to empower people to light up the world around them.

A light in her own community, Azzam launched Mishka Social Services to fill a gap in Hamilton social services to meet the need of the Muslim population. After learning of a hundred people driving from Hamilton to a food bank in Mississauga for food that met their religious dietary needs, Azzam started a food bank operation here in Hamilton under Mishka Social Services, called Barakah Box, among other initiatives the agency organizes.

“I’ve always wanted to service the Muslim community because of my own personal experiences but also because there was an immediate need.” says Azzam.

Azzam launched the non-profit in 2015 before joining HHS.

The food bank operates out of the Muslim Association of Hamilton mosque on the Hamilton mountain.

A group of volunteers package and distribute food boxes to approximately 400 families each month. The box contains staples like rice, pasta, oil, flour, and vouchers for fresh meat and eggs. Families in need can register online and pick up their box on the first Saturday of the month.

The project is operated as a joint venture with Islamic Relief with partnerships and grants with the City of Hamilton, Hamilton Community Foundation, Muslim Association of Hamilton, Taj Mahal Supermarket, Hamilton Food Share, Canada Bread and Cobs Bread.

Due to COVID-19, the food box program currently functions as a drive-through. Before the pandemic, the monthly food bank was a place where people could gather and enjoy food together. The group also makes deliveries to those who need it.

A tale of two passions

When Azzam started working at RJCHC, she was surprised to find a large number of Arabic-speaking families as clients of the Centre. Many of the families she worked with on a regular basis would also access the food bank.

“They would say ‘Ahh, you’re Nagham from the food bank!’ They were so much more relaxed when I came into the room,” she says.

Aside from being a friendly and familiar face at RJCHC, Azzam was able to bring many of the relationships she built through Mishka Social Services into her work. “Patients have access to these resources as well,” she says.

If there is a family at RJCHC living with food insecurity, she connects them to the food bank.

“Hamilton is where I call home”

Azzam has made her mark in Hamilton and the HHS community.

She has a variety of work and volunteer experience with vulnerable populations, working with youth experiencing homelessness, women experiencing violence, and children with autism.

Her husband also works at HHS as part of the team working to implement a new hospital information system. Her father is HHS Physician-in-Chief, and also the current president and board chair of Mishka Social Services. Her step-mom works at HHS as a social worker at the Regional Rehabilitation Centre.

“I fell in love with HHS and never looked back,” she says. “I think I’ll be here for a while.”