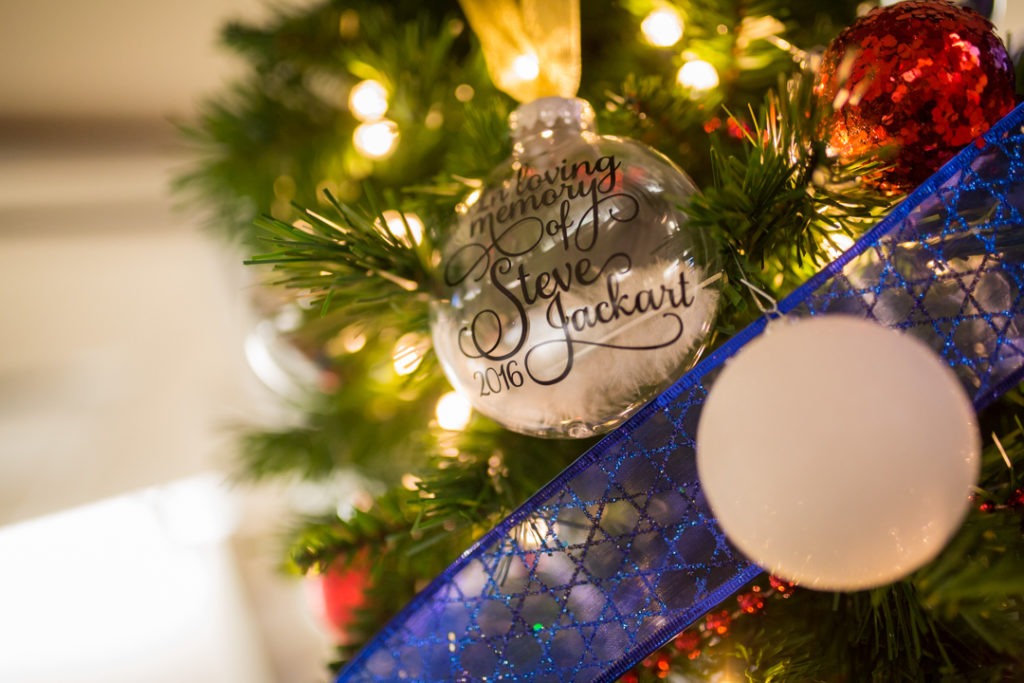 Honouring Steve: A Christmas tree that was meant to be

A request for good will

It started with a post to Facebook. Jen Nixon, a nurse on unit C3 at Juravinski Hospital and Cancer Centre (JHCC) put out a call to the Binbrook Moms group she is a part of. She was hoping for a used tree in decent shape to brighten the holidays for patients and families on the unit. She never imagined a coincidence this kismet.

“When we saw Jen’s post that the oncology unit was looking for a tree donation it just seemed like the perfect way for the team to come together to support their teammate,” says Melissa Folz, who happened on the Facebook request.

Melissa’s son plays hockey with Steven Jackart, who had just lost his dad to brain cancer. She and her husband Chris, who coaches the team, thought it would be a nice chance to honour Steven’s dad, Steve. What they didn’t know was that Steve senior had been a patient on this very unit before he died. “They were looking for something that the players and families could do in his memory, when she came across my post,” says Nixon. “It wasn’t until we got talking that we realized Steve had actually been one of our patients. It seems like fate that she found my message.”

The coincidence doesn’t end there. Steve’s wife, Doris, works at JHCC on unit C4, just above the floor where her husband was cared for.

“When Steve got sick and was in the hospital the other dads would text him a play by play account of the game. Eventually the games were taped so he could watch them in the hospital.

“My husband was on that floor for two weeks,” says Doris. “I visited him a lot and the staff down there were absolutely wonderful. They took really good care of my husband.”

When Melissa proposed the idea of a tree donation to Doris, she was thrilled. Steve loved to watch his son play hockey and felt very connected to his team. His obituary even read, “Knowing Steve, he is probably very busy right now planning his new mode of transportation to Steven’s hockey games and will finally have his seat at Centre Ice.” “He would rather watch the boys play a game than watch the NHL,” Chris recalls. “When Steve got sick and was in the hospital the other dads would text him a play by play account of the game. Eventually the games were taped so he could watch them in the hospital. I am pretty sure he was our number one fan.”

Spreading cheer in honour of Steve

On November 26th, 17 13-year old boys, along with their coaches, filed into JHCC with a tree and all the trimmings.

“The ornament is beautiful and it was really special that he could do that for his dad.”

“They worked together like a little assembly line,” says Nixon.  “They had the tree up and decorated in no time. It’s absolutely beautiful.”

The tree is adorned in the colours of the Glanbrook Rangers: red, blue and white. The team had a special ornament made in Steve’s memory, and his son placed it on the tree.

“He loved it,” says Doris. “The ornament is beautiful and it was really special that he could do that for his dad.”

It was a meaningful day for Steve’s family, the team and the staff who cared for him.

“There wasn’t a dry eye in the room when we were done,” Chris says, “I think everyone there that day took something special away with them.”