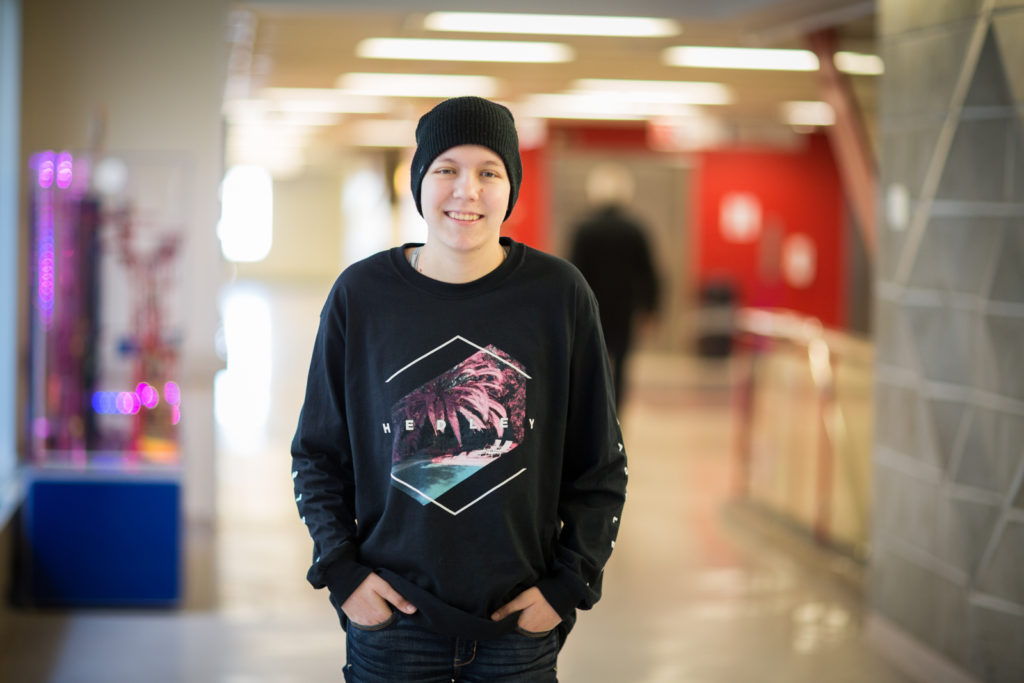 A short part of her long journey

On a Friday evening in December, Danielle Taran was celebrating the end of a successful swim meet with her team mates.
A week later, she was sitting in a room at McMaster Children’s Hospital, her parents by her side, learning that she had Stage 2 Hodgkins Lymphoma.

Danielle calls the days that followed “a bit of a blur”, and understandably so. So quickly, her life changed in a way that no one can ever prepare for. Amazingly, the 17-year-old teen has taken everything in stride. In her words, “We’re all dealt a different deck of cards, and all we can do is play them.”

It all started with a nagging pain in her shoulder during a winter swim meet. A torn muscle or ligament was likely the culprit, Danielle thought. Shoulder injuries are common among swimmers.

By the end of her meet, Danielle had a swell the size of a tennis ball on her shoulder. Her family doctor also suspected a tear and ordered an MRI for a closer look. Days later, still awaiting the test results, Danielle was eating dinner with her family when she began having trouble swallowing. Her parents took her to their local hospital in Georgetown, where another round of testing raised red flags for the healthcare team.

That was Friday evening. By Monday morning, Danielle was at McMaster Children’s Hospital meeting with Dr. Stacey Marjerrison, a pediatric hematologist/oncologist. A few more tests and a physical exam confirmed the diagnosis. It wasn’t a torn shoulder.

Today – five months, four rounds of chemotherapy, and two rounds of radiation later – Danielle knows better than most with what a diagnosis of lymphoma means.

Lymphoma is a type of cancer that affects the lymphatic system, part of the immune system. Hodgkin’s lymphoma is one of two types, and is most common in young adults and those over the age of 55. Like many cancers, it can be treated with chemotherapy and radiation, both of which can come with difficult side effects, like nausea, fatigue, and hair loss.

For Danielle, the last four months have been but a speed bump along her path. Although she’s spent a lot of time in bed, tired from treatment, she’s managed to keep up with her school work and still makes it to the pool to swim. She’s kept up her job as a swim and lifeguarding instructor, and she’s still working passionately toward her goal of becoming a welder, inspired by her grandfather and uncle who welders, too. Danielle will begin her welding apprenticeship in July.

“This is just a short part of my life story”

Danielle credits her family, friends and healthcare team for their unwavering support along the way.

“They motivate me,” she says. “They’re all here for me, always.”

Danielle has also gained a new community of support: her fellow patients and their families at McMaster. In them, she’s found a group of friends who truly understand what she’s going through. They attend “Teen Night” together at the hospital, they text constantly, and they offer a shoulder when moments become difficult.

But right now, things are looking up.

Danielle is making good progress with her treatment. Her latest scans show that the cancer in her lymph nodes is shrinking. In a few weeks, she’ll complete her final round of radiation. It’s been a hard few months, but Danielle says the experience has given her a few new tools in her belt.

“I’ve learned a lot about myself over the last few months,” she says. “I’ve learned that I am strong, and that I can always find the bright side in a difficult situation.”

And, as her mom always tells her:

“This is just a short part of my life story.”

Hamilton Health Sciences | @HamHealthSci - July 3
With the MyChart app and website you can see your upcoming appointments and get reminders before your visit. Learn… twitter.com/i/web/status/1…

Hamilton Health Sciences | @HamHealthSci - July 2
#DYK: Not all medical concerns require a visit to the emergency department 🏥. Visit NeedADoc.ca to lear… twitter.com/i/web/status/1…
Ways to Give