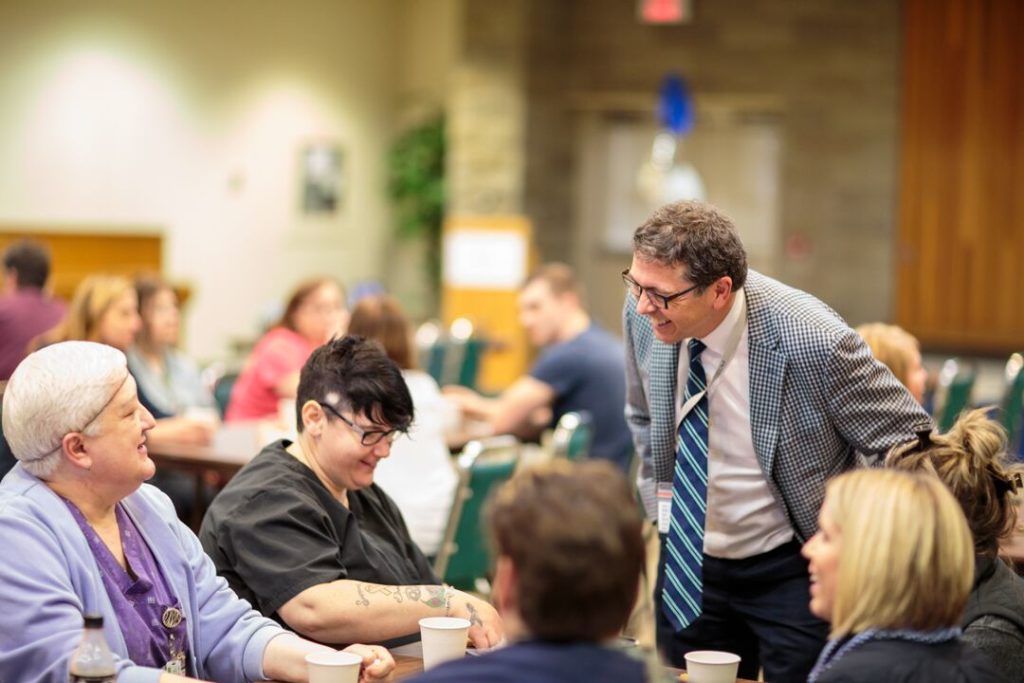 While signs of the fire are still visible on the third floor walls outside Hamilton Health Sciences’ (HHS) St. Peter’s Hospital (SPH), the walls of the auditorium were lined with images of grateful patients and words of thanks as part of a recent special event. On Tuesday, SPH staff, volunteers and physicians, came together to be recognized and thanked for their extraordinary efforts following a major fire. It broke out in the south wing on November 5, and resulted in close to 100 patients being transferred to hospital and hospice sites around the region for their care.

Sharon Pierson, Vice President ofCommunity Medicine and Population Health at Hamilton Health Sciences, welcomed everyone to the event—an official thank you to SPH from the organization’s leadership team. Dr. Ralph Meyer, Vice President ofOncology and Palliative Care, spoke about the tremendous dedication and commitment of staff and physicians who cared for patients at SPH and other sites following the fire.

The stories we’ve heard are no real surprise

Dr. Wes Stephen, Executive Vice President of Clinical Operations and Chief Operating Officer, expressed his pride and gratitude for the dedication of everyone at SPH and beyond. “Today’s event is about acknowledging you and thanking you for what you’ve done for your patients and their families,” he said, speaking to attendees at the celebration. “You worked tirelessly, providing the best care possible under the circumstances.” He and other leaders also acknowledged the challenges faced by the team and the work still underway to resume normal operations. Dr. Stephen also noted that many incredible stories of exceptional patient care following the fire have been shared with hospital leadership in the past several weeks. “The stories we’ve heard are no real surprise to us as we know St. Peter’s has a long-history and deep-rooted philosophy of relationship-centred care. You demonstrated dedication, courage, resilience, and compassion.” He also shared an excerpt from a letter written by a family member of a St. Peter’s patient:

“The amount of compassion and care I witnessed was like nothing I have ever experienced before in such a stressful state of emergency. The endless efforts of these staff members trying to comfort my Mom and all the other patients, when they were feeling afraid, confused and most vulnerable was unbelievable! To handing out blankets, cups of water, food that they were running for or just letting them know that they were going to be okay, was far beyond commendable. I can’t even imagine the adrenaline levels they were all dealing with and still managed to keep it all under control in such a high stressful situation. To keep on top of things the way they all did, was beyond impressive!”

A symbol of thanks

Certificates were presented to St. Peter’s Hospital’s “first responders” – those staff members and physicians who were present at the time the fire broke out. Leslie Gillies, Director of Orthopedics and Complex Care and Site Administrator, Dr. Dick Seeley, Chief of Complex Care, Aging and Palliative Care, and the site management team congratulated staff as they presented the certificates. St. Peter’s staff, physicians and volunteers received pins in the shape of a butterfly, long a symbol associated with St. Peter’s. Staff who were unable to attend the event will receive their pin from their manager.

Rob MacIsaac, HHS President and CEO, wrapped up the event by speaking about his gratitude for the safety of everyone and his immense pride in the response of the team and what was accomplished by everyone working together. “At every phase, people came together and showed the power of teams and the power of our system at Hamilton Health Sciences,” Rob said, “Thank you all for the role you played in accomplishing this amazing result.” The day of the fire

On Sunday, Nov. 5, a fire occurred in an unoccupied wing of Hamilton Health Sciences’ St. Peter’s Hospital (SPH) site. Thanks to the quick response of SPH staff, physicians and emergency crews, no one was injured and nearly 230 patients were moved to a safe, secure area away from the fire. Over the following weeks, SPH staff, physicians, volunteers and community partners went above and beyond to ensure our patients continued to receive excellent care and service, including those who have travelled to the four other centres where 96 St. Peter’s patients were relocated as a result of smoke damage to some areas.
Thank you all for your exceptional commitment to our patients!