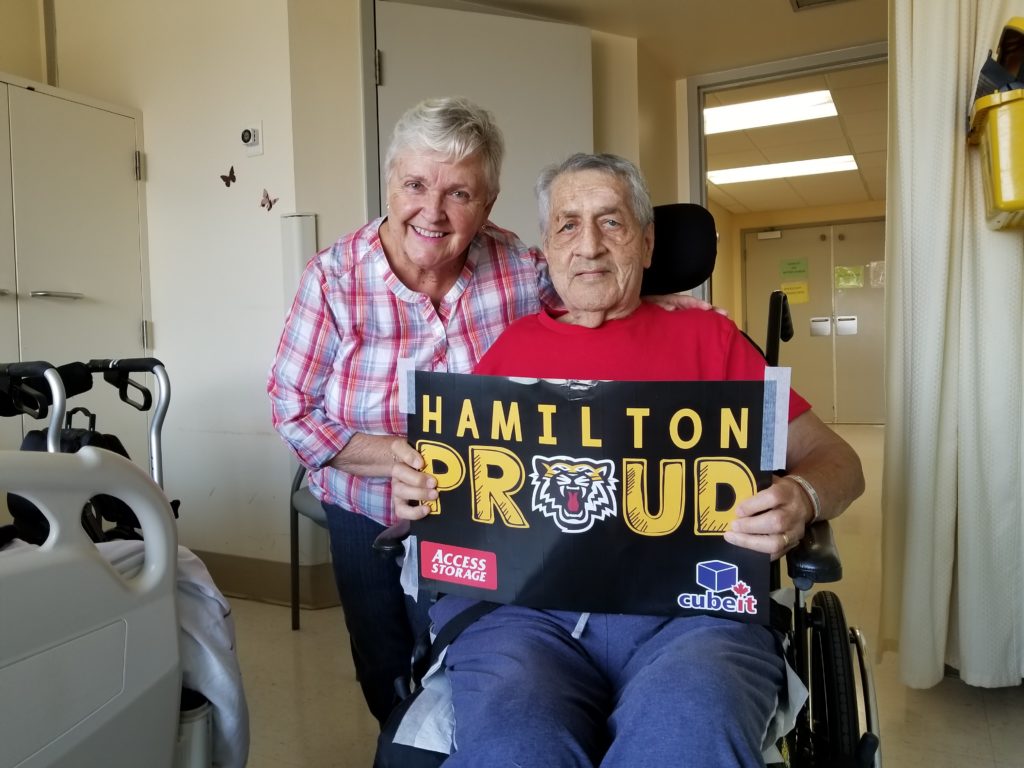 A season ticket holder from the beginning

Bill Hrasko has been a Hamilton Tiger-Cats season ticket holder since 1952—just two years shy of the team’s inception in 1950. He was 20-years old and working at Westinghouse when he and his coworkers first bought tickets together. They sat on the crude, but beloved bleachers of what was then called Civic Stadium, and cheered their hearts out. He’s been a loyal fan ever since.

When you ask him about his love for the team, he talks about the good old days. “They were always in contention for the cup,” he says.

This year’s home opener—his 66th—was the last Ticats game Bill will ever attend. He and his son, Billy Jr., sat in the club level seats they’ve enjoyed since the stadium reopened as Tim Horton’s Field. It was a meaningful moment for the long-time fans. Not long after the game, Bill, who has Alzheimer’s, was admitted to St. Peter’s Hospital (SPH). He’s is in kidney failure and has been on the Palliative Care Unit for the past seven weeks.

“It’s like a family here,” says Bill’s wife, Kathy, who spends hours at his side each day. “Everybody knows everybody. It’s like a community.”

Making a special memory for Bill and his family

Last weekend, that community welcomed a few more members—more muscular than most, and undoubtedly faster, but full of the same friendly spirit that thrives at SPH.
“You couldn’t have asked for three nicer men,” recalls Kathy. “They were all lovely.”

Those three men were Jeremiah Masoli, Luke Tasker, and Brandon (Speedy B) Banks, three of the Ticats’ star players. The team arranged for them to visit the hospital after Bill’s grandson called and asked if they might be able to help his grandpa tick an item off his bucket list. They presented Bill with a signed game ball as a thank you for his years as a loyal fan.

“When they handed him the game ball, you could just see his face light up,” Kathy says. “He was wowed.”

The definition of a loyal fan

“We’re honoured he’s made the team such a large part of his life,” says Matt Afinec, president and COO of business operations for the Tiger-Cats. “It’s always a priority for us to deliver exceptional experiences across the community for our fans, especially passionate, life-long fans like Bill who have been with us through thick and thin.” The small gesture went a long way for Bill, whose hospital room is bedecked in Ticat’s gear, and for his family.

“Luke Tasker got down on his knees so he was at eye-height with Bill,” says Kathy. “He took both of his hands and said what an honour it was to meet someone so dedicated as a fan. I don’t know if Bill was taking it all in because of his Alzheimer’s, but for me to hear that, it meant so much.”

Kathy doesn’t know how much longer Bill has. For now, he and his family are enjoying as much time as possible together, especially when the football game is on TV. They do know one thing for sure: when he’s gone, they’ll remain season ticket holders, and cherish warm memories of their Bill as they watch his cats.