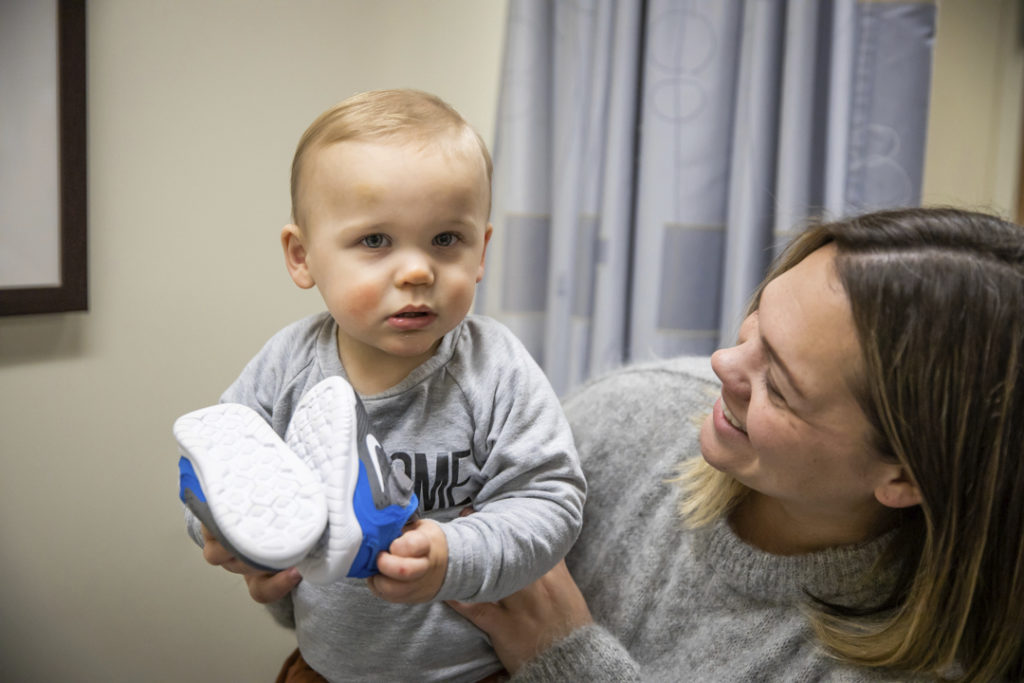 Toddler able to swallow with help of new MCH clinic

It wasn’t until January that parents Chantel and Joel had their Christmas dinner with their family of four. They froze turkey and all the trimmings to enjoy once their toddler, Henry, had his feeding tube removed and was able to eat solid foods. Fast forward a few weeks to Henry and twin brother James sitting on a counter, sprinkling their favourite toppings on a homemade pizza, a special moment for the family.

Fifteen-month old Henry is learning to chew his food even more than others his age, so it doesn’t get stuck in his narrowed esophagus, the canal that connects the throat to the stomach. Henry has a condition called esophageal atresia (EA) and tracheoesophageal fistula (TEF).

The esophagus is the “food pipe” that leads to the stomach. With EA, the esophagus is completely blocked so newborns cannot be fed by mouth until it is repaired through surgery.

The trachea is the “windpipe” that leads to the lungs. With TEF, there is a connection between the esophagus and trachea that can lead to lung infections.

Henry’s family is now able to manage his condition more easily with help from a specialized new clinic at McMaster Children’s Hospital (MCH).

EA/TEF is one of the most common gastrointestinal (GI) birth defects. The condition becomes obvious after birth, when the newborn isn’t able to feed. Whatever they try to drink comes right back up. When Henry couldn’t nurse, he was sent to MCH’s Neonatal Intensive Care Unit (NICU), where he stayed for almost a month.

Henry had surgery under the leadership of pediatric surgeon Dr. Mark Walton to remove the connection between the trachea and esophagus and repair both tubes. Even when repair is successful, there are long-term problems that can occur, especially with feeding.

After surgery, Henry received Total Parenteral Nutrition (TPN) through an IV to get his nutrients. TPN is a method of feeding given through the vein instead of by mouth, so it bypasses the GI tract. Later, he began drinking thick fluids through a bottle. Once he met certain goals, such as tolerating a variety of foods and reaching a certain weight, he was able to go home. At three months, he was able to tolerate thinner fluids such as breastmilk. 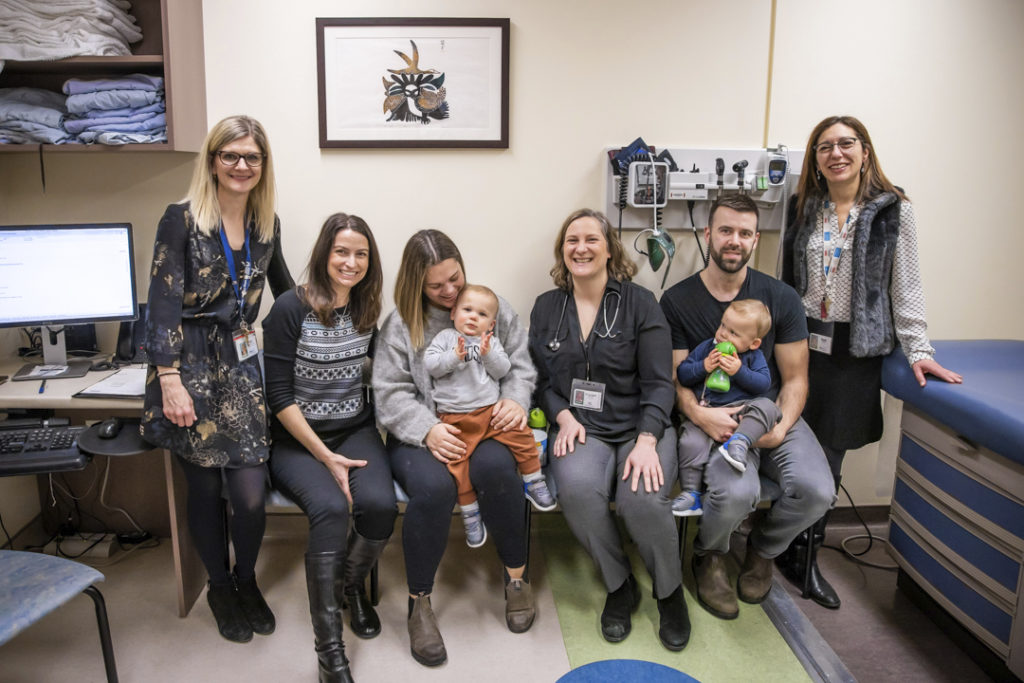 The EA/TEF clinic recently began at MCH and operates three times a year. Patients with this condition visit the clinic if they are experiencing worsening heart burn, trouble swallowing, or require a checkup.

“The goal is to provide an integrated clinic where surgical, feeding, and GI symptom questions can all be addressed at the same time by a team who gets to know their child,” says Dr. Elyanne Ratcliffe, a pediatric gastroenterologist at MCH.

“Families can have their surgical questions answered, then ask our occupational therapist about oral feeding, then talk to our dietitian about what to feed, and myself about medications.” The team also supports the transition to adult services when kids age out of the clinic.

The clinic gets all the right professionals in the same place, limiting additional visits to the hospital and providing convenience for families.

The clinic ensures a child is getting enough nutrition and is able to progress to age appropriate foods. Often, children with EA/TEF will have to modify, soften, or break down their food, take smaller bites, drink water, and pace themselves.

While EA/TEF can be managed with regular clinic visits, there are some long-term risks, explains Dr. Ratcliffe.

There is a risk of developing esophageal cancer as an adult, a risk of an esophageal stricture (narrowing of the esophagus), inflammation, and respiratory issues depending on what happens with the lungs.

The esophagus helps move food along. But with a narrow esophagus, the movement of food down the esophagus is not as smooth and makes swallowing more difficult.

There is also risk of gastroesophageal reflux. “People always have a little bit of heart burn. But if the esophagus doesn’t have a nice clearing pattern to go into the stomach, the acid is going to hang out in the esophagus longer than it should.”

Next steps for Henry

When doctors notice Henry’s esophagus has narrowed, a dilation procedure helps to stretch it. Henry has had two dilations so far. A catheter with a balloon attached is put down the esophagus and the balloon gets blown up, just enough to stretch the esophagus without causing a tear.

After Henry’s last dilation in December, he was on an NG tube (passed through the nose into the stomach) for nutrition for two weeks until he could swallow again. Ever since, he has been able to eat solids.

“Before, Henry was just shoving everything in his mouth” says Chantel. “The clinic has helped him learn to chew and has helped us transition from very soft foods to more solid and textured foods.”

He will continue to practice chewing foods like crunchy toast or a hard cracker, “versus bananas or pasta noodles that he knows he can get away with not chewing and have it get stuck.”

His next follow up appointment will be this summer to see if he his esophagus is narrowing or he is having difficulty swallowing.

“The clinic is amazing because everybody is on the same page and all bring something to the table to help Henry be successful with eating and being a normal kid.”

As of now, Henry’s favourite food is scrambled eggs.