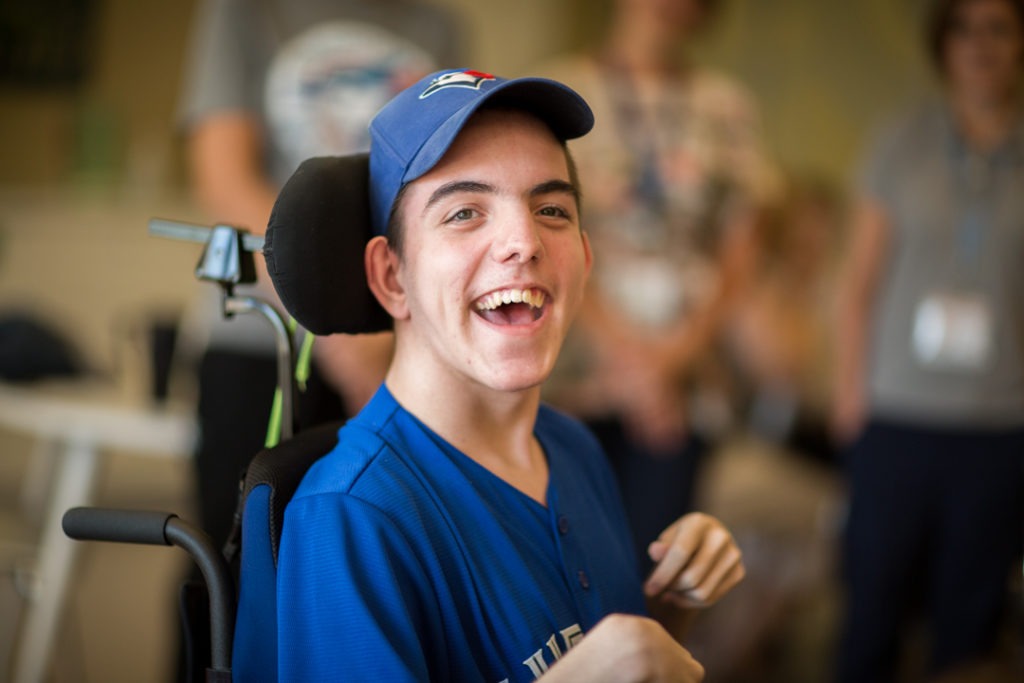 Something was missing from Tyler’s second home

“He never watched cartoons as a kid,” says his stepdad, Dave Abbott. “He always watched the Jays.”

So when Tyler recently had an extended stay at McMaster Children’s Hospital (MCH), he was itching to watch his favourite team.

“I was worried that I would miss games,” the 17-year old says.

“It was very devastating for him. We asked him what we could do to help make the situation a bit better.”

Tyler was born with cerebral palsy and scoliosis. He has had more than a dozen overnight stays at MCH for various procedures and considers the hospital his second home. But when that second home doesn’t have your favourite game on the tube, it’s hard to stay for an extended visit. In April, Tyler had surgery to straighten his back because of his scoliosis. The procedure went well and after a few weeks in hospital, he was excited to go home for the weekend. On Friday afternoon he learned that he would have to stay through to Sunday. And that meant missing three more games.

“It was very devastating for him,” says Deb Gjertsen, an occupational therapist in pediatrics at MCH. “We asked him what we could do to help make the situation a bit better.”

First, Tyler asked for a hug. Then, he asked if Gjertsen could find a way to help him watch the Jays games. A makeshift solution sets the plan in motion

Gjertsen rounded up her colleagues to see if they could make it happen. Tyler’s nurses, speech and language pathologist, child life specialist and pediatrician all pitched in with ideas and support. They worked with IT and were able to stream the games on an iPad for Tyler to watch. The quality wasn’t great, and it cut out a few times, but for Tyler, those blips were insignificant—he was able to enjoy his ballgame.

That was just the beginning.

“I was here late trying to get the streaming working,” recounts Gjertsen, “and my manager, Laura Babb, asked what I was doing. When she found out we decided we should find a way to make this happen for all of our patients.”

From there, Babb rallied her colleagues and they set out on a mission to get Rogers Sportsnet, the primary carrier of Jays games, onto all the TVs at MCH.

“We wanted to go above and beyond for these kids who are in the hospital.”

The Hamilton Health Sciences team spoke with with Chris Kay, senior director of sales at Cogeco, who immediately assured them they would find a way to make it happen. Cogeco modified a cable package specifically for MCH to include both Sportsnet and Sportsnet One.

“We were very happy to be able to do this because of our partnership with Hamilton Health Sciences and the work they do for the community,” says communications and community relations manager for Cogeco Ontario, Glenda Lloyd. “We wanted to go above and beyond for these kids who are in the hospital.” Cogeco has donated the two channels and they’ll be available on TVs throughout MCH indefinitely for hundreds of young sports fans to enjoy. Tyler is back at home now, but he visits MCH often for checkups, and to say hello to his ‘hospital family’. He came in for an eye appointment recently and squeezed in a bit of time to watch the Jays battle the San Diego Padres on the big screen in the teen lounge.

“I was so persistent to have it,” Tyler says. “I was trying to get it on no matter what it took. I hope they have fun watching it.”

Gjertsen knows they will. And her team will be sure to tell them that Tyler White is the reason they’re getting their sports fix.