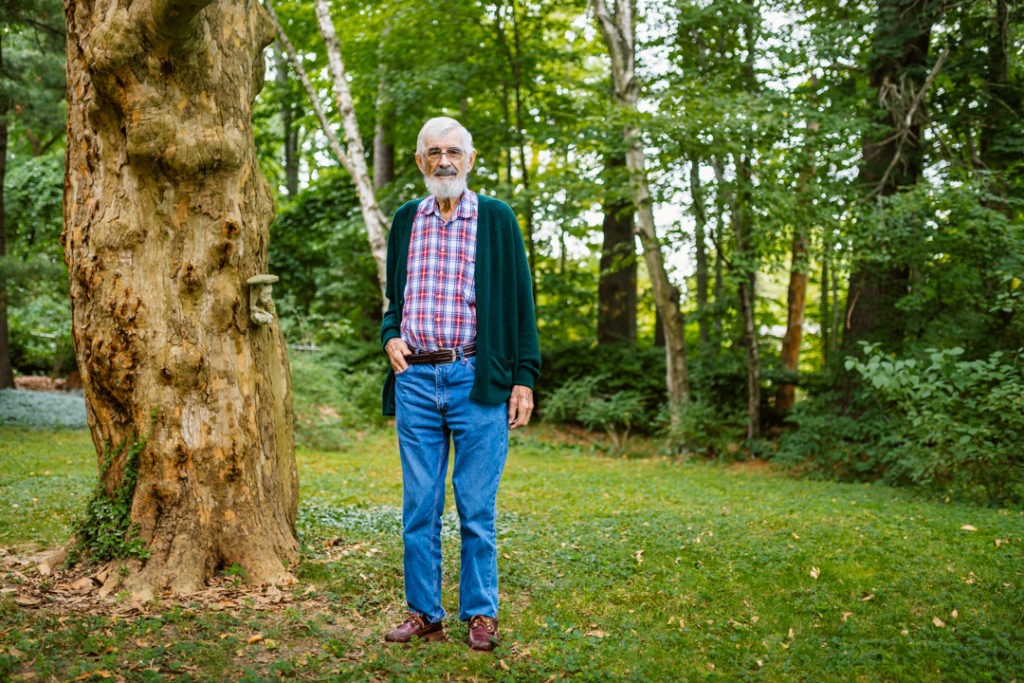 Pictured at his home, HHS patient Dave Whatmore was the first person in Canada to undergo a new lifesaving cardiac valve repair procedure this month as part of an international study.
Stories

A Hamilton Health Sciences patient is the first in Canada to undergo a lifesaving cardiac valve repair procedure as part of an international study underway at a select group of hospitals in Canada, the United States, and Europe.

Hamilton Health Sciences (HHS) is one of only a select number of advanced cardiac centers worldwide involved in the TRILUMINATE trial, and the interventional cardiology team was the first in the country to perform this new procedure. 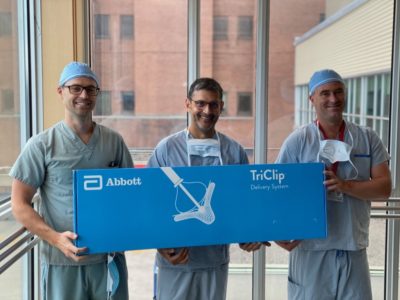 The HHS team of Drs. Douglas Wright, Shamir R. Mehta and J.D. Schwalm were the first in Canada to perform this procedure.

“It’s a significant milestone for our hospital and nationally,” said Dr. Shamir R. Mehta, an interventional cardiologist at HHS and professor of medicine at McMaster University. He’s also a senior scientist with the Population Health Research Institute (PHRI), a joint research centre of HHS and McMaster.

“This procedure would have been science fiction 10 years ago,” said Mehta. “But with rapid advances in device technology and our ability to image the heart, we are now able to repair the tricuspid valve without actual surgery.”

The TRILUMINATE trial is evaluating the safety and effectiveness of a catheter-based, non-surgical treatment for patients with severe tricuspid regurgitation – a condition where the tricuspid heart valve doesn’t close properly, allowing blood to flow backward into the heart. This forces the heart to work harder and in severe cases can lead to heart failure and death.

“To me, it’s like a miracle,” said Whatmore, who underwent the procedure on Aug. 18 at HHS’ Hamilton General Hospital site and was released home the next day. Recovery is typically fast since no surgery is involved. Patients are usually in hospital for only one night and are walking the day after the procedure.

“All the staff were phenomenal,” added Whatmore. “I feel 100 per cent better now.”

Before undergoing the procedure, he had been feeling increasingly weak and no longer had the stamina to climb stairs or walk beyond the end of his driveway. Now, just days after the procedure, Whatmore was able to walk to a neighbour’s house for a visit.

“The tricuspid valve — located on the right side of the heart — is often referred to as the forgotten valve because until this procedure there were few treatment options,” said Dr. Wright, a cardiologist at HHS who performed the echocardiography imaging during the procedure. Prior to this new procedure, surgery was high-risk and rarely done, so Wright says evaluating new ways to fix a tricuspid valve leak is the key to saving lives. 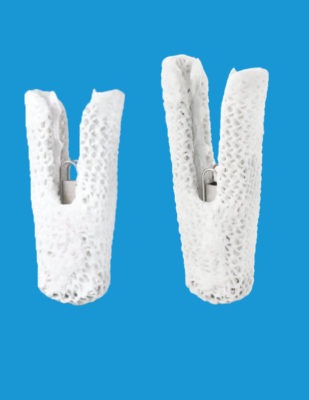 The tricuspid valve has three flaps — known as leaflets — that control the flow of blood between the two chambers on the right side of the heart. When those leaflets don’t close properly, blood can flow in the reverse direction – called regurgitation — forcing the heart to work harder. Leakage is a common problem, affecting one in 30 people over the age of 60. In severe cases, the mortality rate is very high with 65 per cent of patients — or two out of every three – not surviving beyond five years.

The TriClip procedure repairs the tricuspid valve without surgery, by delivering the device to the heart through the femoral vein in the leg.

“A tube is inserted, and the clip and equipment needed to attach it are fed to the repair site,” said Mehta. “We can see what we’re doing using echocardiography  — an ultrasound of the heart. This basically acts as our eyes, allowing us to visualize the valve and area of leakage, and place the clip where it needs to go.”

The device works by clipping together a portion of the valve’s leaflets  to reduce the backflow of blood. This approach allows the heart to pump blood more efficiently, relieving symptoms and improving a person’s quality of life.

Diagnosing a tricuspid valve leak is fairly straightforward. Cardiologists are able to detect leakage through an ultrasound.

“There will definitely be more.”