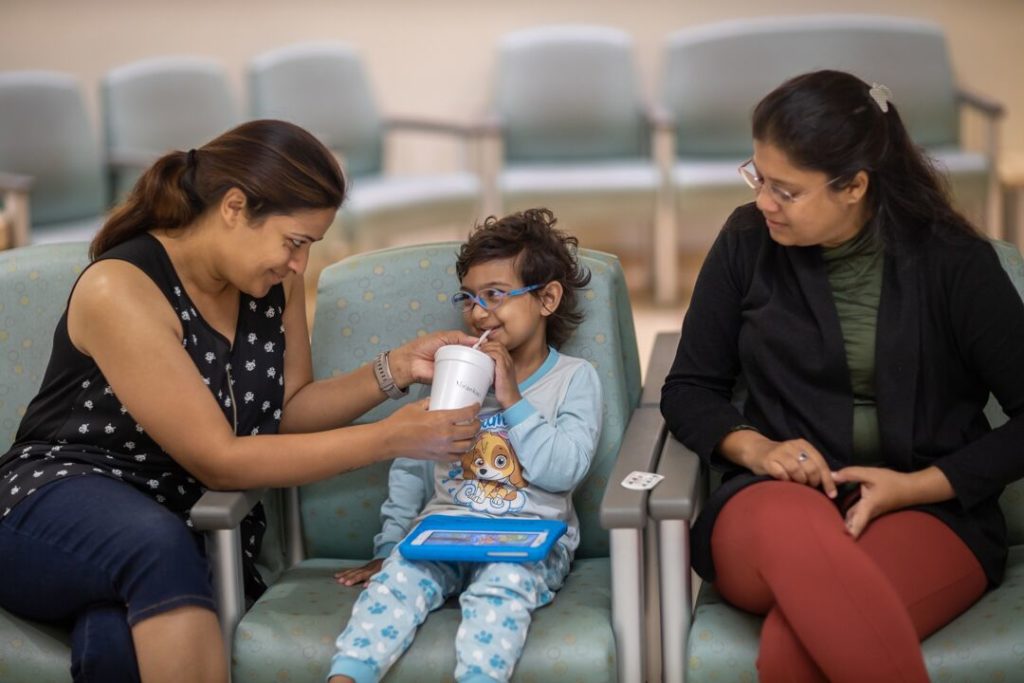 Sophie’s mom and aunt encourage her to drink her oral contrast beverage, which will help create a clear picture of her insides during the CT scan.
Stories

A big ‘jump’ forward for kids with tumours

When Sophie received her cancer diagnosis, she was still full of energy, running and playing like nothing was wrong. But tumours were growing all over her tiny four-year old body.

“She was diagnosed with stage 4 neuroblastoma,” recalls her dad, Robin. “She had tumours in 21 locations throughout her body.”

During treatment for a cancer like Sophie’s, the healthcare team needs to perform regular scans to track whether the tumours have grown or shrunk. Sometimes patients need to have four or more different scans—all in the course of a week—to get a complete picture of the tumours.

McMaster Children’s Hospital (MCH) has developed a new program to make these scans easier on young patients with solid tumours. It’s called Triple Jump because patients ‘jump’ around the hospital to each different scanning machine.

UP CLOSE: view the process in photos from start to finish 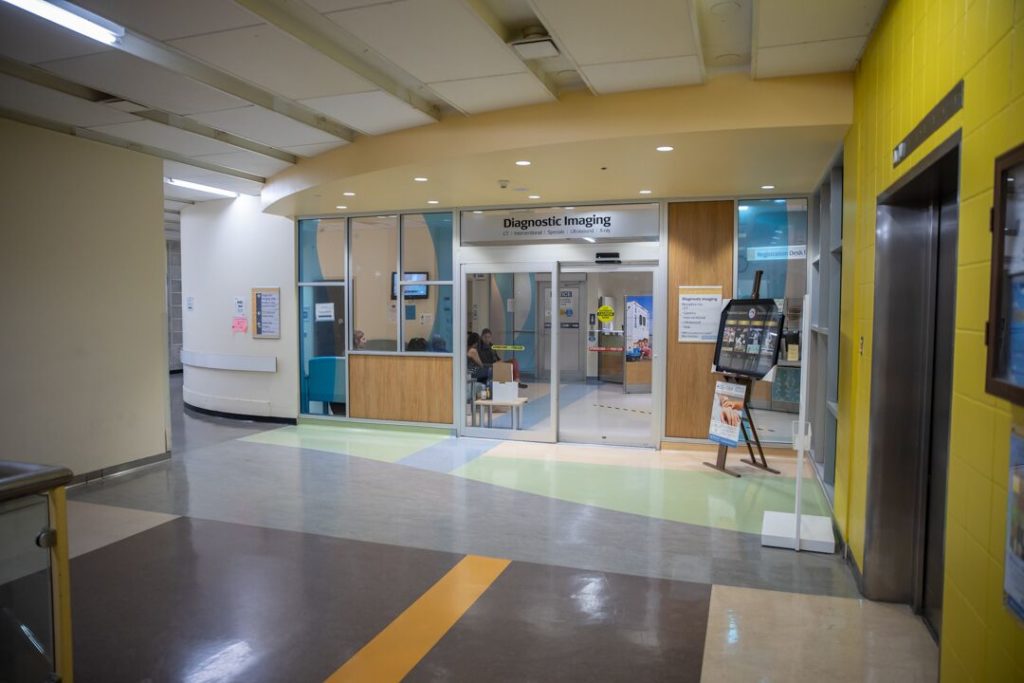 Triple Jump patients start their day very early—usually before 6 a.m. They go to Diagnostic Imaging to be registered.
1 of 18

Sophie’s mom and aunt encourage her to drink her oral contrast beverage, which will help create a clear picture of her insides during the CT scan.
2 of 18 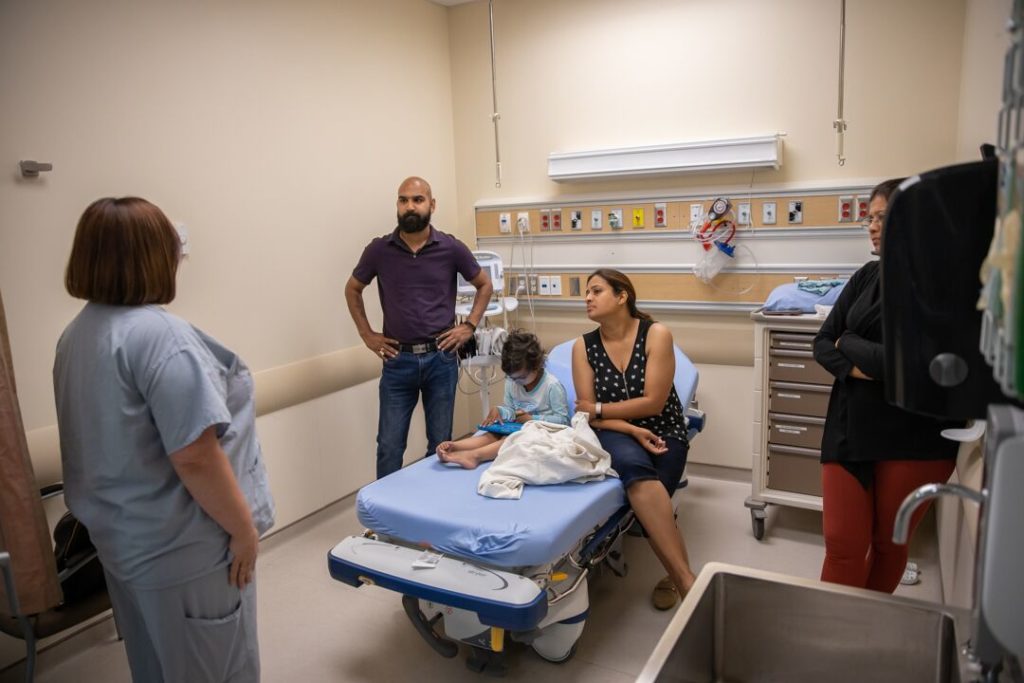 Dr. Bruce explains the plan for the day while Sophie plays on her iPad. Sophie is having two scans and a bone marrow biopsy, which will take about four to five hours total.
3 of 18 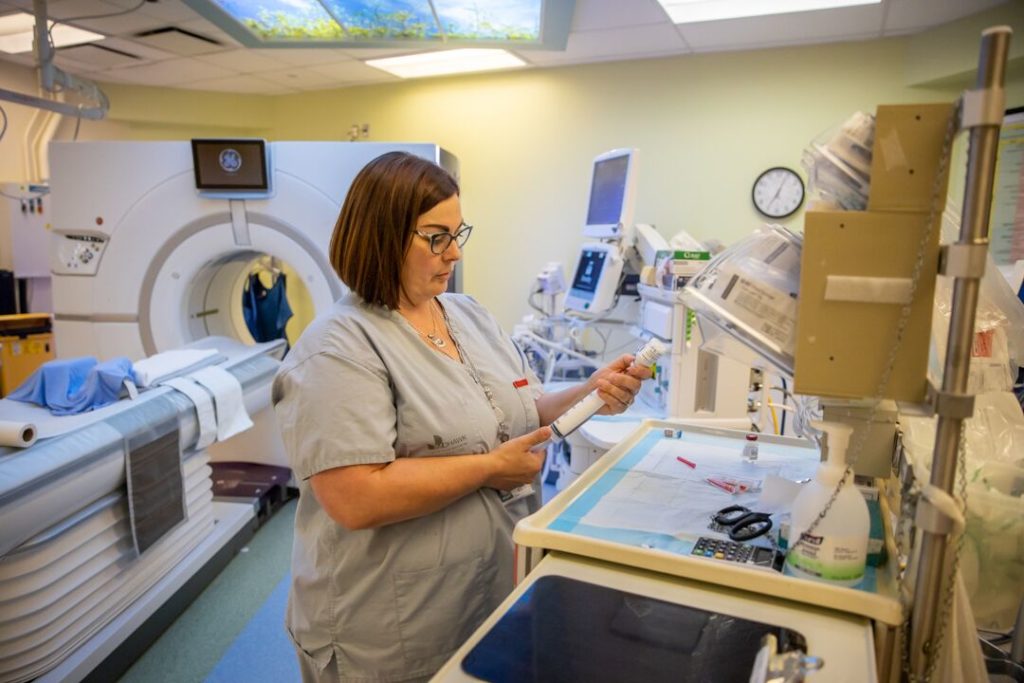 Dr. Bruce prepares the medications she will need throughout the day. She carries everything she may need from scan to scan in case something goes wrong and they need to take quick action.
4 of 18 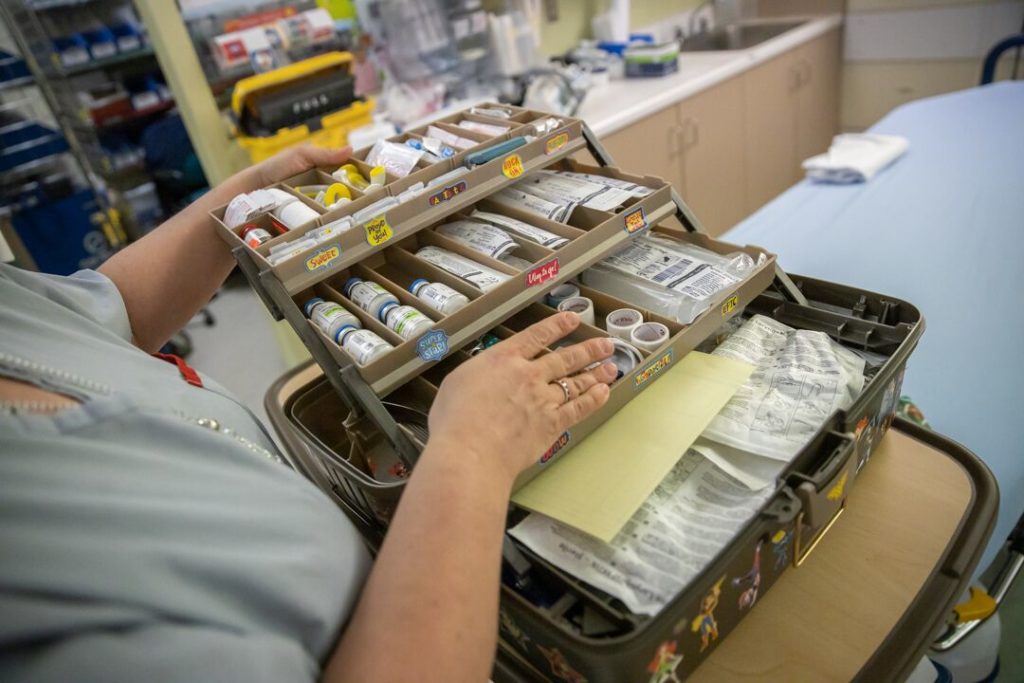 Dr. Bruce assembled a tackle box so she can easily access all the supplies she needs during Triple Jump days. It’s known as the Superhero Support Kit.
5 of 18 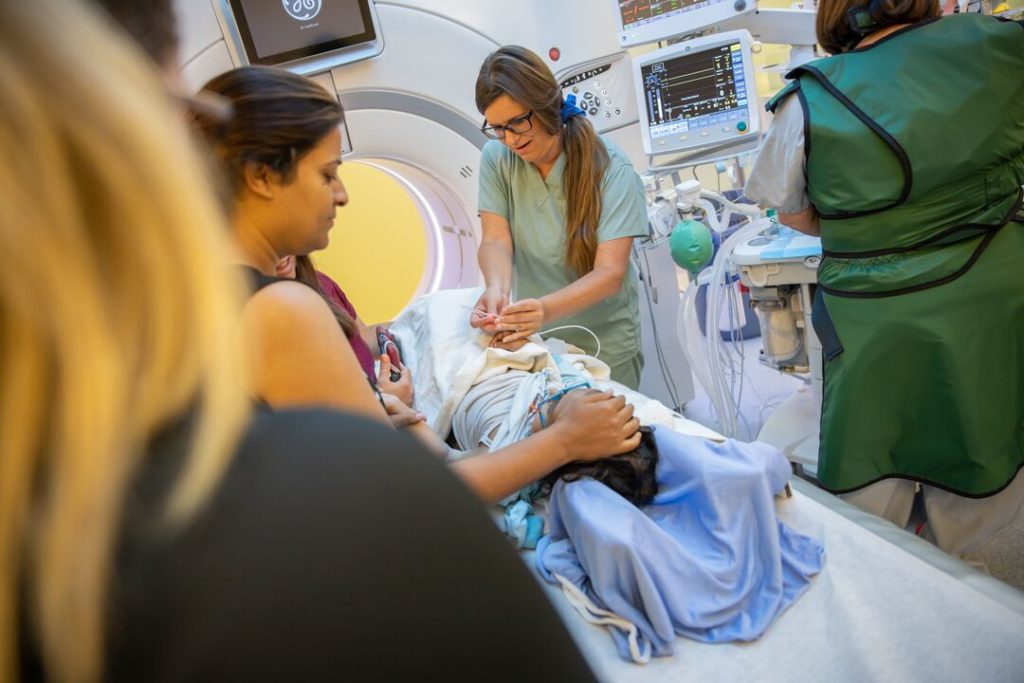 Sophie’s mom helps her relax as the team prepares her for the CT scan. This is when she receives the general anesthetic that will keep her asleep throughout the day.
6 of 18 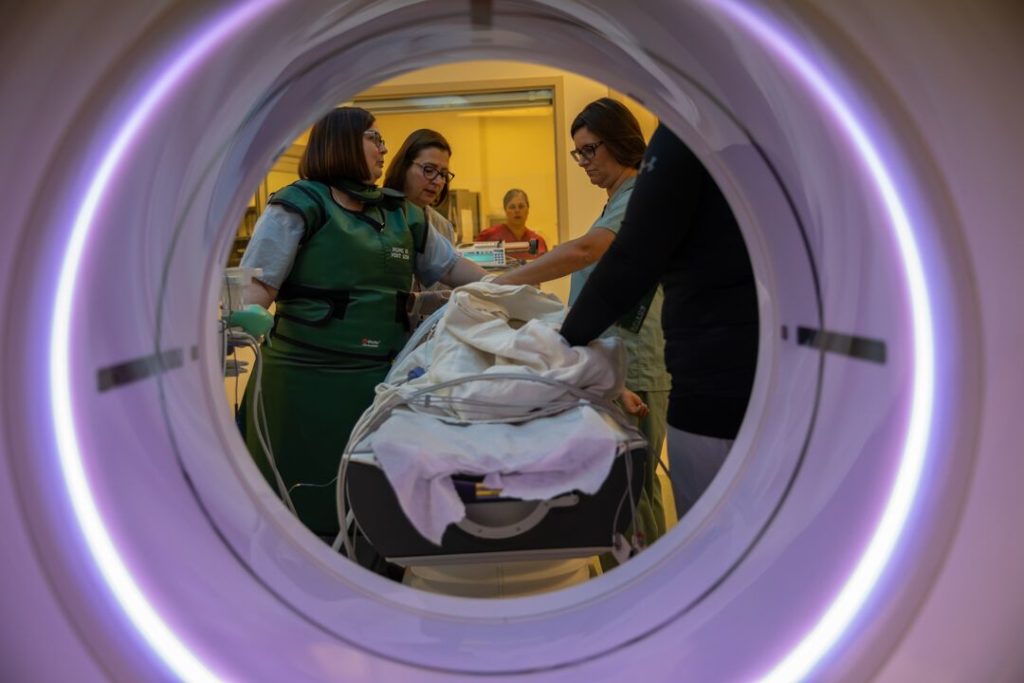 The team positions Sophie as medical radiation technologist, Heather McLean, checks to make sure everything is ready to go.
7 of 18 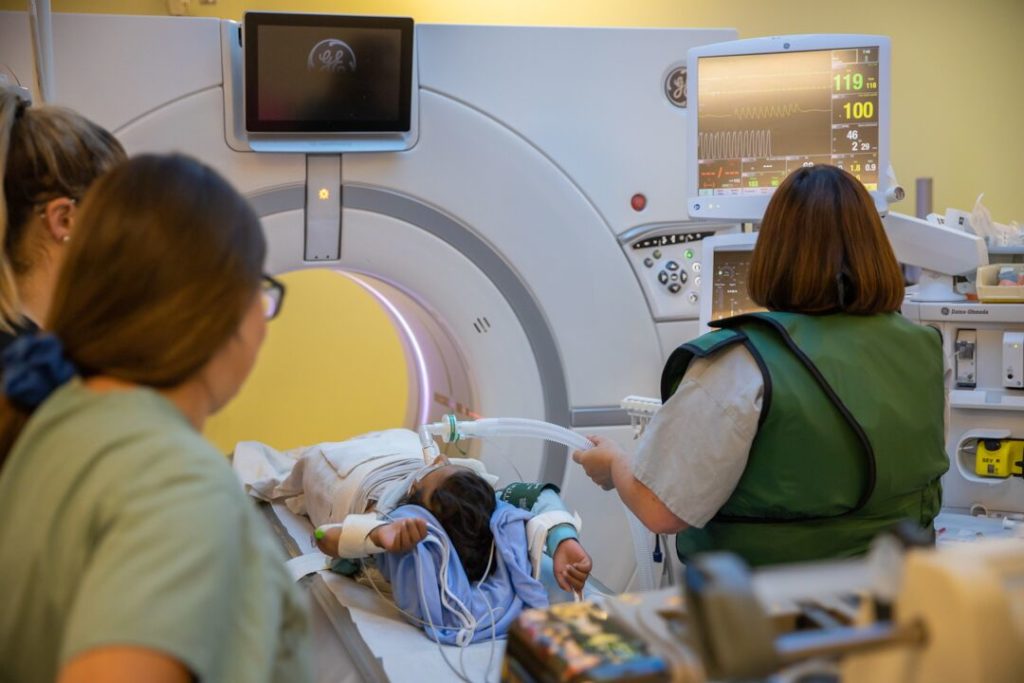 A breathing tube is inserted into Sophie’s airway to breathe for her while she is asleep. Dr. Bruce monitors her vital signs continuously.
8 of 18 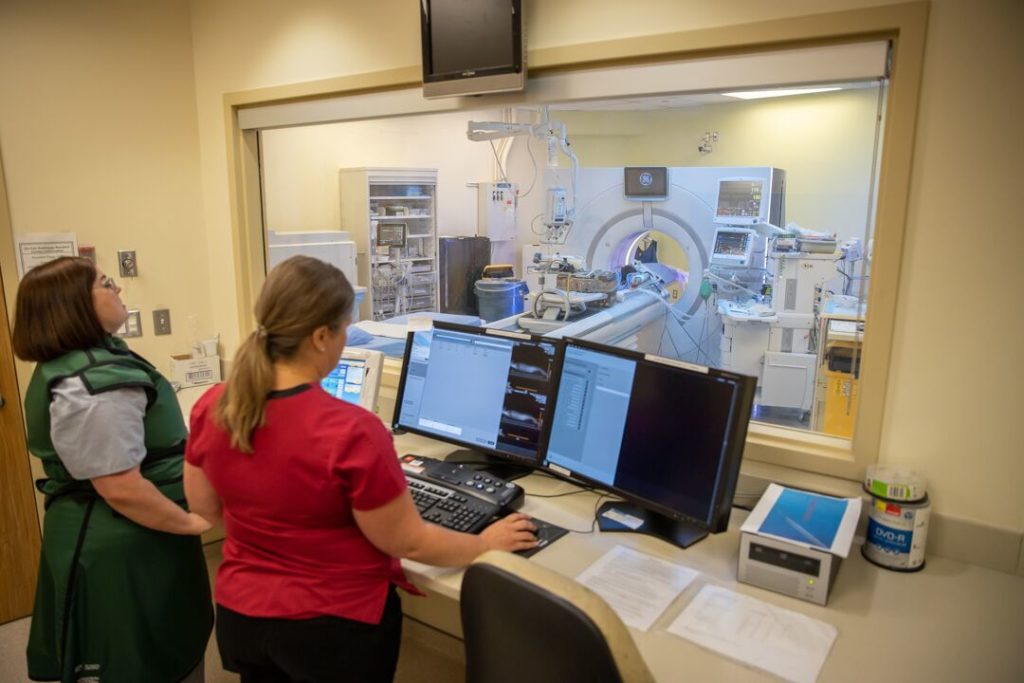 Sophie is slowly moved into the CT scanner while medical radiation technologist, Heather McLean captures images. The CT scanner is like a 360 degree X-ray that photographs Sophie’s entire body.
9 of 18 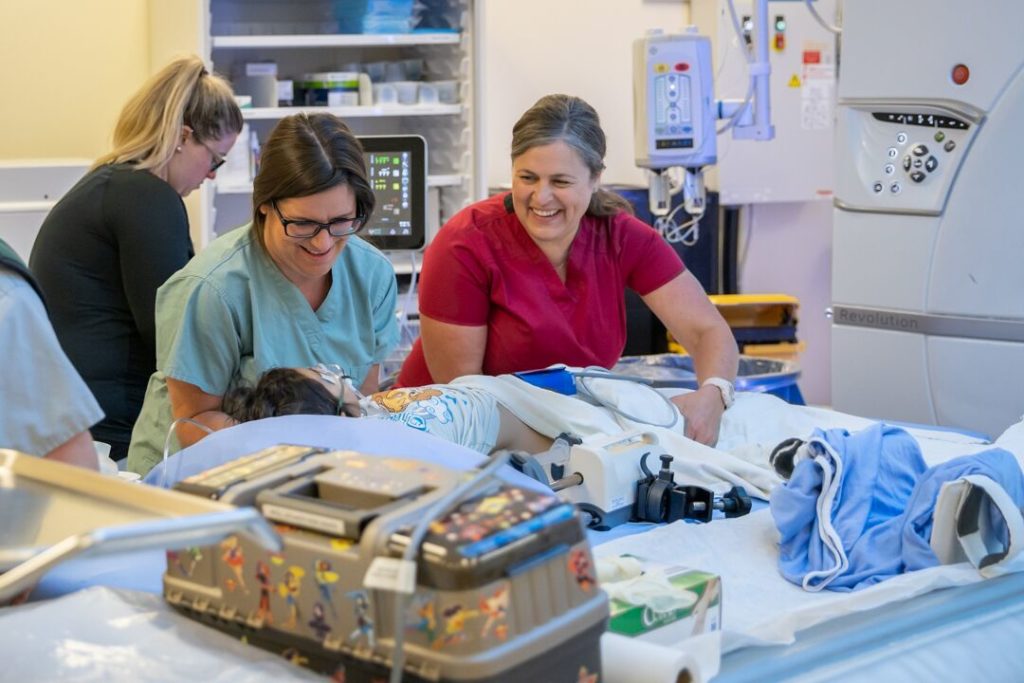 After the CT scan is complete, sedation team nurse, Rachel Gagnon and medical radiation technologist, Heather McLean, gently transfer Sophie to a stretcher so she can be moved to the next scan location, which is in the basement of the hospital.
10 of 18 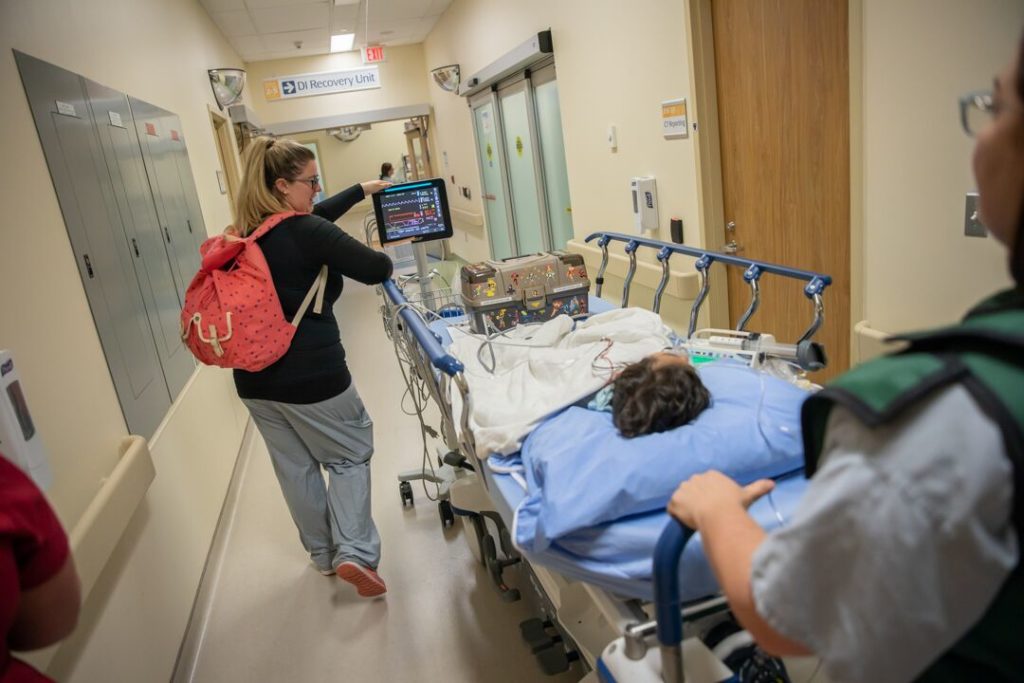 Everything has to be transported with Sophie. Sedation team charge nurse, Kaitlyn Murray, pushes a portable vital signs monitor which continually tracks Sophie’s heart rate and breathing.
11 of 18 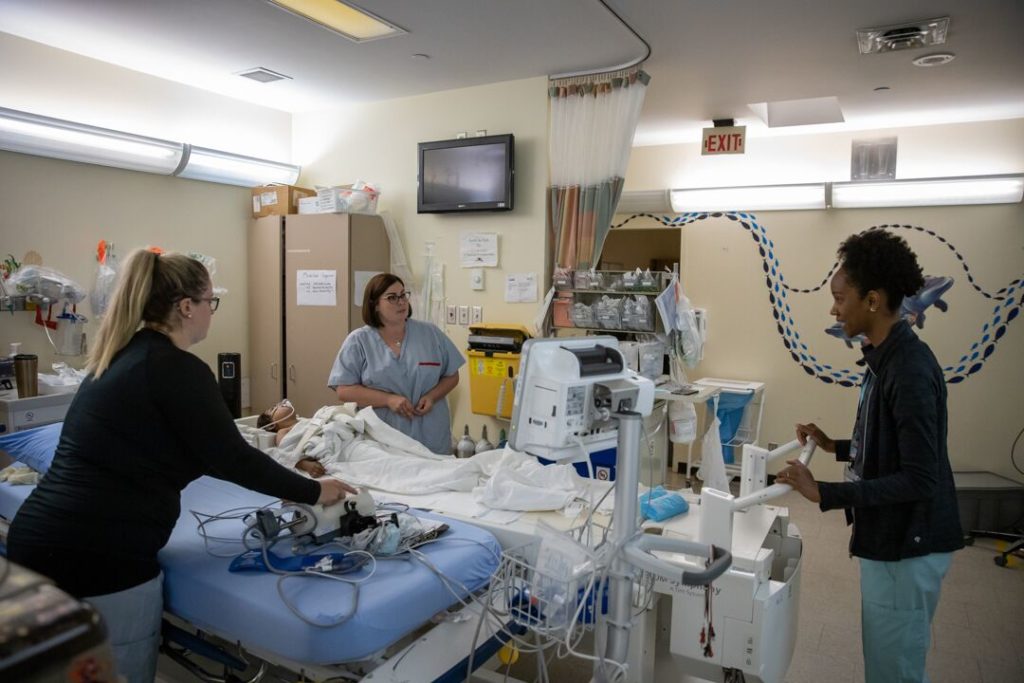 Sophie is checked into the MRI unit by MRI technologist, Marie Medeiros, and is transferred a bed that attaches to the scanner.
12 of 18 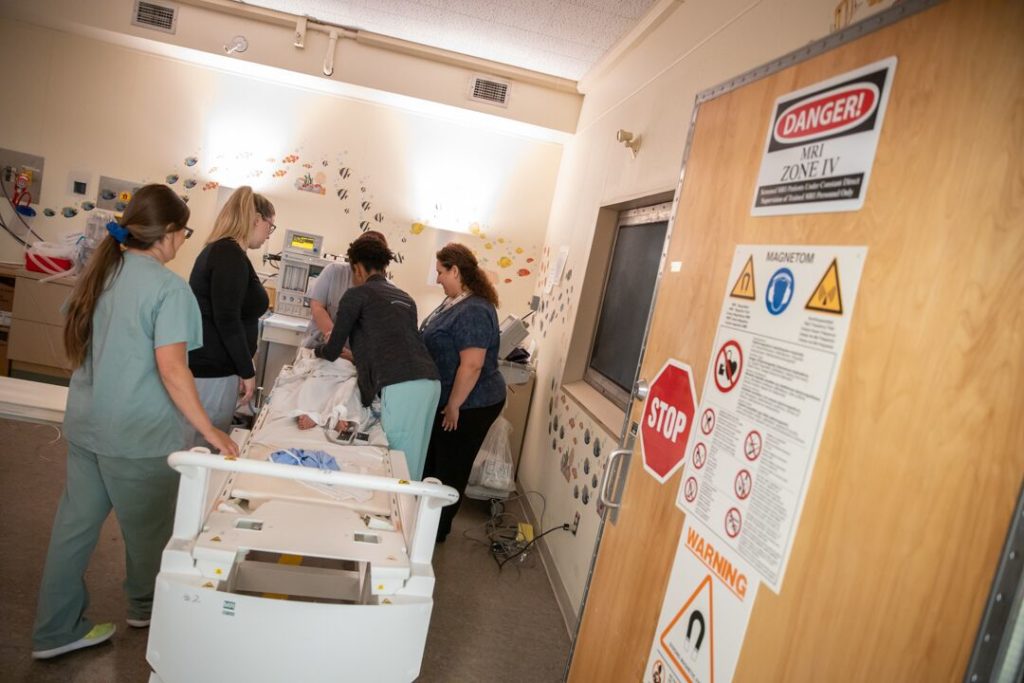 MRI uses powerful magnets to produce detailed images so care is taken to remove any metal objects before the scan begins.
13 of 18 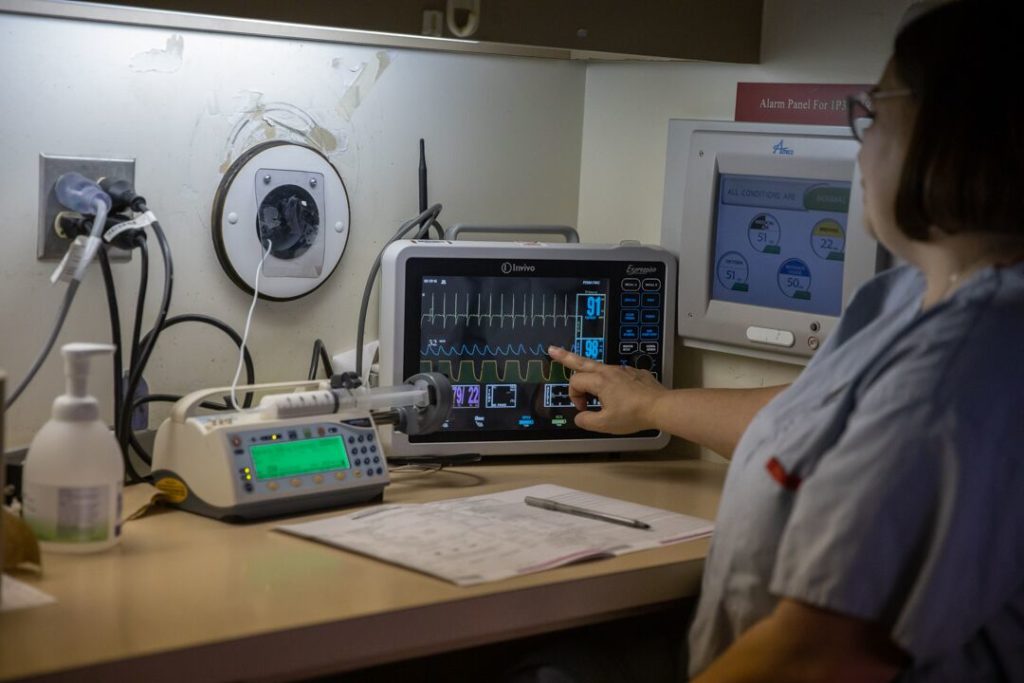 Dr. Bruce sits in room that overlooks the MRI scanner and tracks Sophie’s vital signs using a remote monitor. The medication used to keep Sophie asleep is fed through a long tube that connects to Dr. Bruce’s equipment through a porthole in the wall.
14 of 18 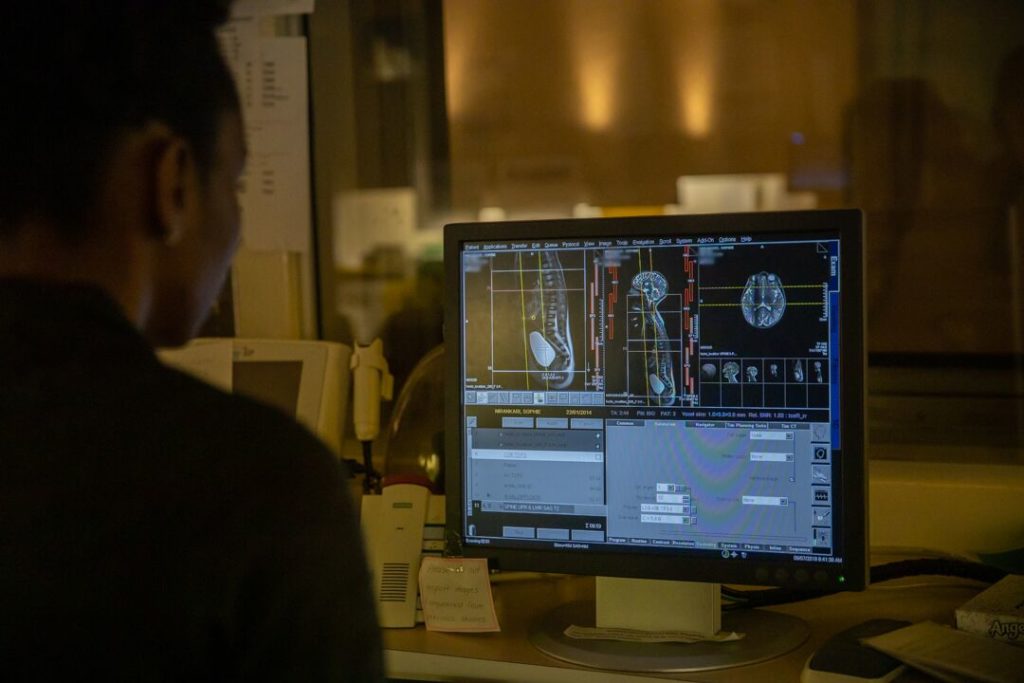 The MRI scan captures very detailed images. The technologist adjusts angles and indicates the exact position of the images. This allows them to be used along with the CT scan to create a complete, detailed picture of the body.
15 of 18 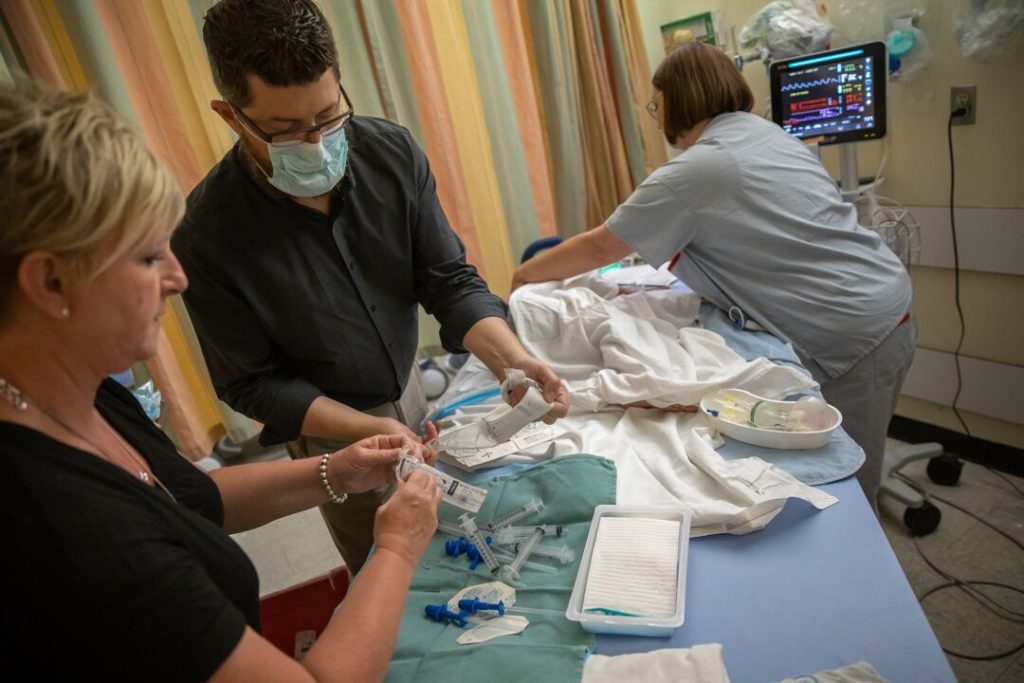 After the MRI, Sophie is transferred back to the stretcher. Pediatric oncologist, Dr. Adam Fleming, and nurse, Kim Hruska perform a bone marrow aspiration and bone marrow biopsy. This procedure can be very painful, so is done under sedation in children.
16 of 18 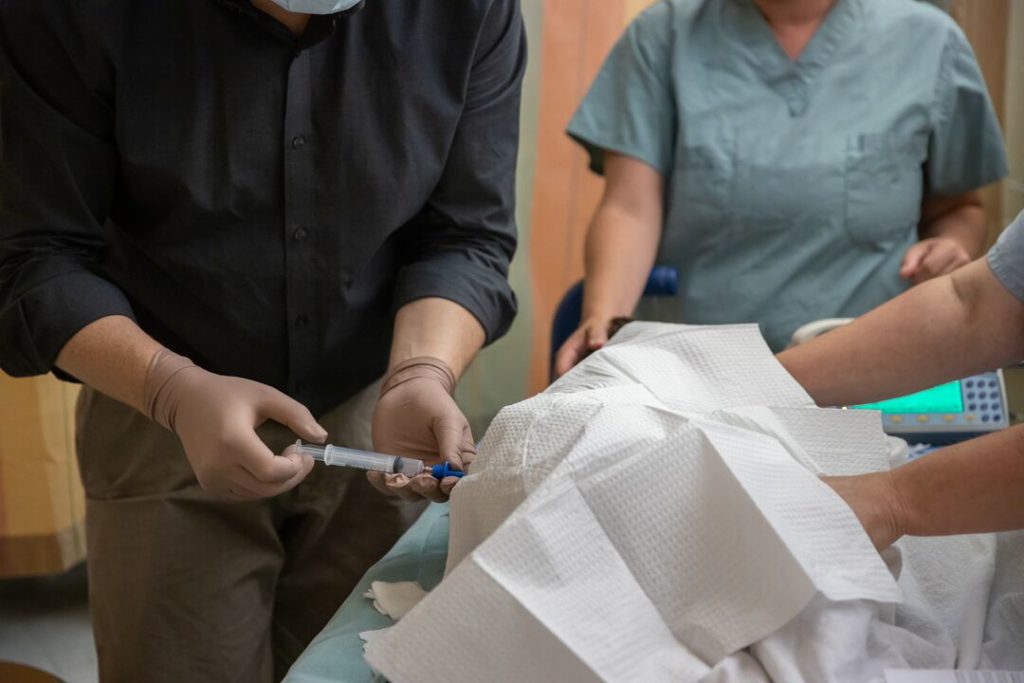 The bone marrow will be tested to determine if any cancer cells are present.
17 of 18 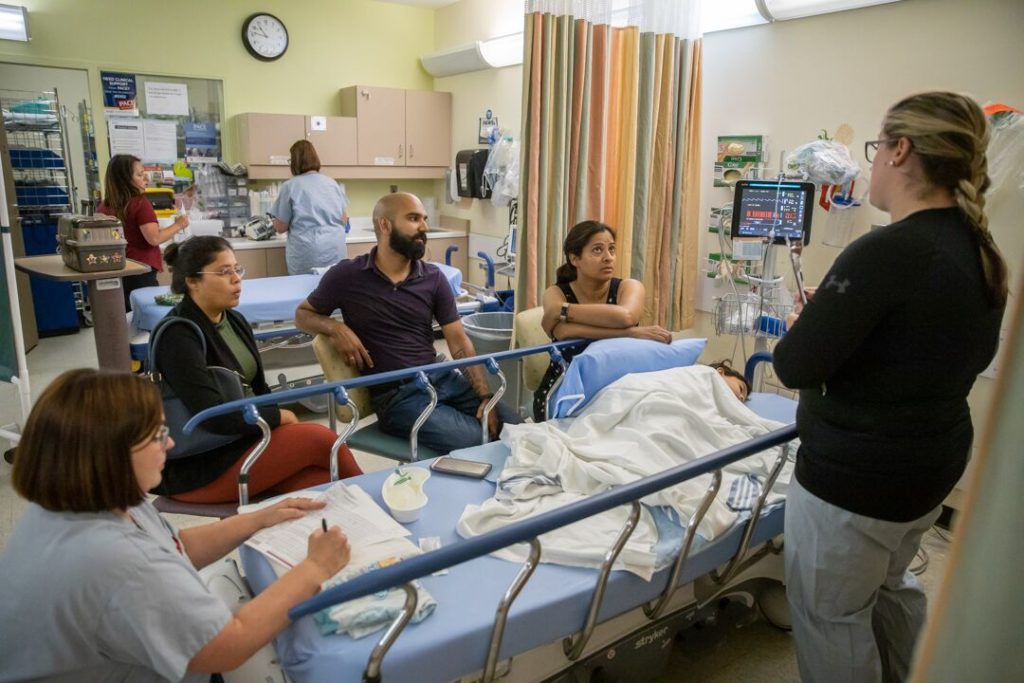 After Sophie’s three procedures are complete, her parents are called back in and wait for her to wake up from anesthesia. She will then have a drink and a snack, and her family will be given instructions to make sure she is safe as the anesthesia leaves her system.
18 of 18

Before the program was created, each scan was scheduled on a different day. Families had to make multiple trips to the hospital, and often take extra time off work. The scans must be done on an empty stomach, so young patients had to fast multiple days in a week. Some even lost weight during their scan weeks.

“Scan weeks are a stressful time for families, and we wanted to do something to make it easier, so we created Triple Jump,” says Dr. Tracey Bruce, a pediatric anesthesiologist who spearheaded the program along with her colleague, Dr. Amanda Whippey.

Triple Jump coordinates with staff in several departments to schedule scans back to back in multiple areas of the hospital. The patient is given a general anesthetic in the morning, so they are asleep for the full day. They are wheeled from one scan to the next under the careful monitoring of their team. Parents are able to stay with their child until they fall asleep, and then return in the afternoon when all the scans are complete.

“It has made things a lot more relaxed for us, and for Sophie” says Anima, Sophie’s mom. “During her last scans we were able to go out for breakfast and take a break, and then come back to the hospital before Sophie woke up.”

“Our goal was to make this program work for families, not the other way around,” says Dr. Bruce. “Having a child with cancer is already stressful enough. We hope this makes things a bit easier for them.”

Making life just a bit easier for kids with tumours

Sophie has had a long journey, but is feeling well, and continues to be a bubbly, energetic girl. Now six-years old, she’s excited to start school in September. Her team at MCH will continue to follower her closely, and her family is glad they’ll be able to do so using Triple Jump—it has made a difficult process so much easier. 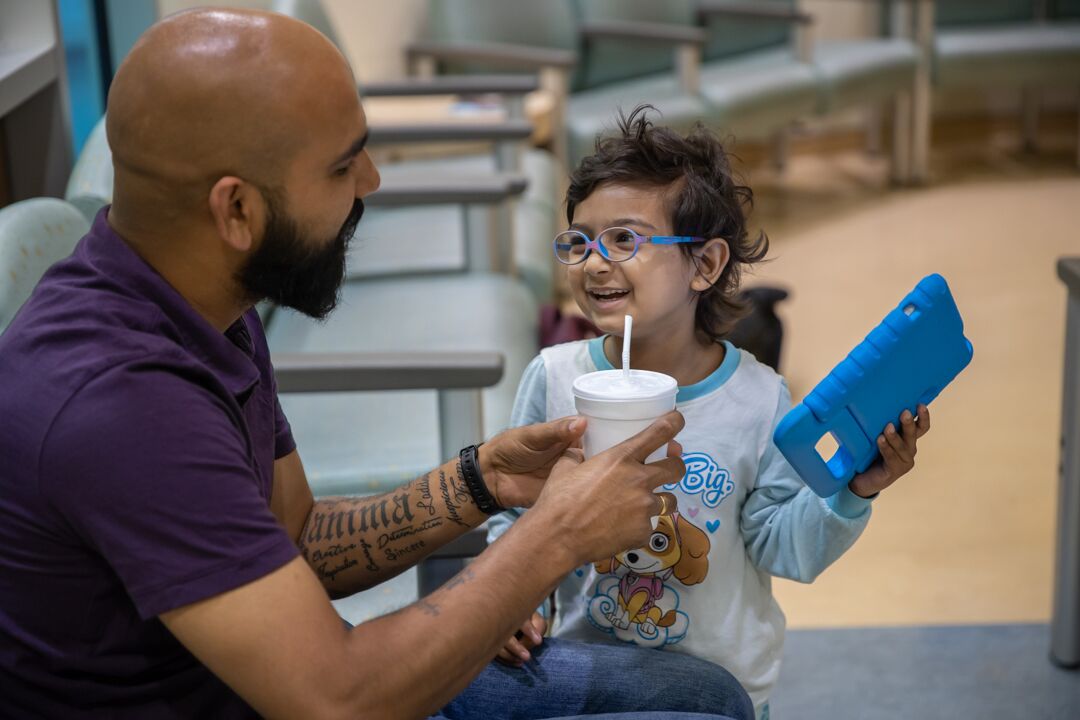 Young Aliya and her family have also seen the difference Triple Jump makes. Doctors diagnosed her with a rare and aggressive tumour called Rhabdomyosarcoma in September 2016. Before Triple Jump, she and her parents dreaded scan weeks.

“She had to be sedated for each scan, which we know is safe, but still a bit scary for both her and us as parents,” says her mom, Patricia. “For her, having to be sedated multiple times never got easier.”

They describe Triple Jump as a complete game changer. “It decreases the overall stress of getting scans done,” says Patricia. “Now all scans were completed on one day, under one sedation, with Aliya only needing to fast one time. What an improvement! And for us, we only needed to take one extra day away from work, instead of several.”

A novel approach to scan weeks

Dr. Bruce is unaware of any other Canadian hospital with a similar program. It may seem like a simple process, but scheduling scans for Triple Jump requires complex coordination. Dr. Bruce says it’s well worth it.

“There are many people who work hard to organize and execute our Triple Jumps,” says Dr. Bruce. “Without them, we wouldn’t be able to offer this service.”

Families have all responded very positively, which is a welcome reminder of the difference they’re making.