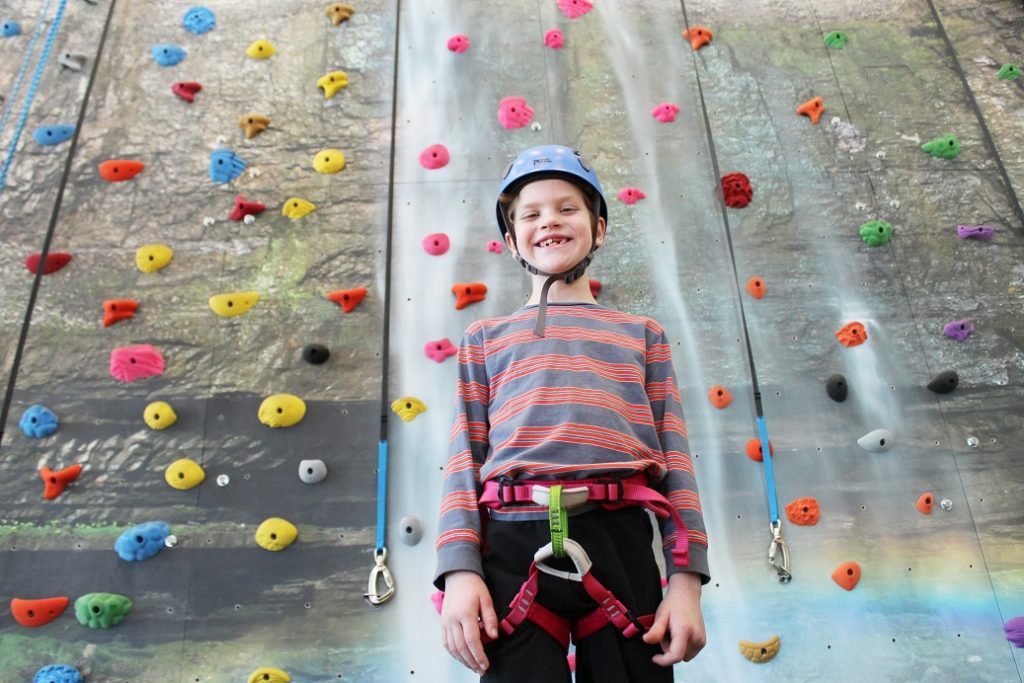 When Ozzie celebrated his second birthday and was not walking yet, his mother Erin knew something was wrong.

Spastic diplegia is a chronic neuromuscular condition that results in a high level of tightness and stiffness of the muscles, particularly in the legs, hips and pelvis.

“The muscles in his right side are weaker than those in his left side,” says Erin. “That affects his ability to walk and engage in other physical activities.”

Ozzie visits the Prosthetics and Orthotics Service to be fitted for special orthotic braces to enhance his mobility. He also receives ongoing physiotherapy through the Developmental Pediatrics and Rehabilitation Program. Ozzie particularly enjoys the climbing wall, which helps build his upper body strength and improves his motor skills.

“I’m incredibly grateful that Ozzie has access to these wonderful health care services.”

“Being able to climb is a rush of adrenaline for him and he enjoys the challenge,” says Erin.

Spastic diplegia has no cure, so he will continue to receive care at RJCHC throughout his childhood and teenage years.

“I’m incredibly grateful that Ozzie has access to these wonderful health care services,” says Erin. “I’m also grateful to donors who support McMaster Children’s Hospital Foundation and make a real difference to patients like Ozzie when they need it most.”

Olive was vomiting with alarming regularity. The five-year-old from St. David’s began complaining about pain in her eyes and she was uncharacteristically lethargic. Olive’s parents were hoping that she was just suffering from the flu, but her condition continued to worsen during the spring of 2017.

“Her teachers were concerned because she was falling asleep in class,” recalls Olive’s mother, Amanda. “She also lost her balance when I picked her up from school, so I took her to MCH.”

“The situation was extremely dangerous and Olive needed brain surgery.”

Scans revealed that a cancerous tumour the size of a baseball was growing in Olive’s brain.

“We were in complete shock,” says Amanda. “The situation was extremely dangerous and Olive needed brain surgery. The craniotomy took about nine hours and it was a nerve-wracking experience for us as we waited. Luckily the surgery went well and they managed to remove most of the tumour.”

Olive underwent chemotherapy during the summer, followed by a second brain surgery, during which surgeons were able to remove the rest of the tumour during the three-hour operation. This was followed by six weeks of radiation therapy.

“There’s a lot of fluid in her brain, so she may need to have a shunt put in at some point, but we’re all done treatment for now. Olive is cancer-free but we still visit MCH for regular follow-up appointments. We’re extremely grateful for the care she received. Olive is alive today because of the amazing doctors and staff at MCH.”

Join Ozzie and Olive, as well as Superhero Ambassador Gabriel, at MacKids Walk & Wheel on June 2, 2018! Be a superhero and fundraise at mackids.ca/walkandwheel.