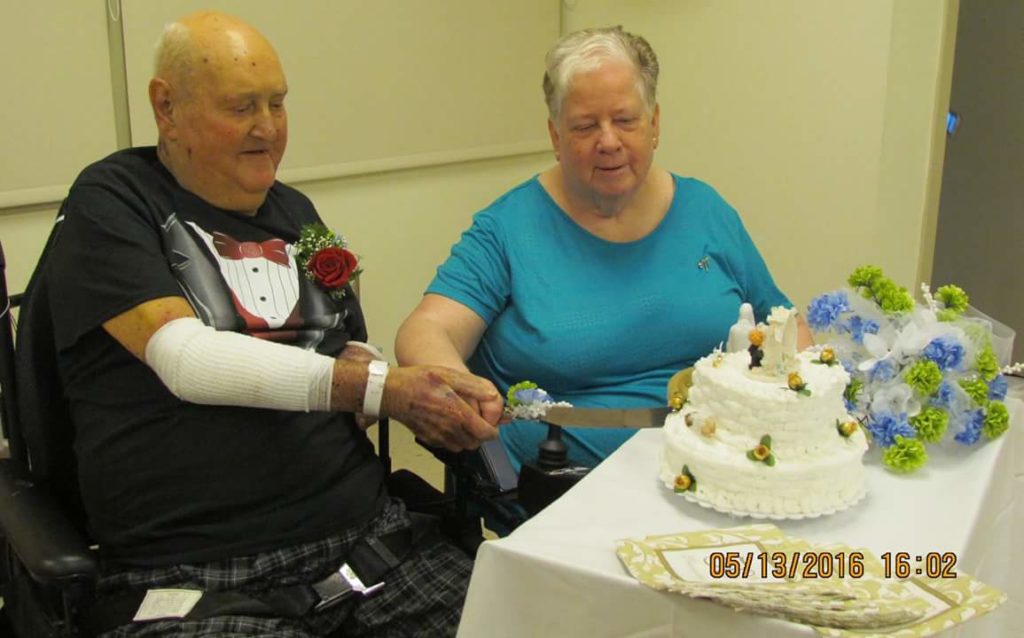 A wedding in palliative care: a last chance to affirm their love

Christmas has always been a special holiday for husband and wife Alex and Irene. Planning the decorations for their home and stringing lights together was a favourite tradition. But last year, holiday decorating didn’t go as planned.

“Alex was putting lights up on the house, and he fell from the ladder,” recalls Irene. “I called an ambulance and they took him to Hamilton General Hospital (HGH).”

Irene was expecting a broken bone. Shortly after Alex arrived at HGH, he was taken for a CT scan. The results were much worse than expected. Alex was diagnosed with stage four liver cancer.

Christmas in the hospital

He was admitted to HGH and stayed there until January. The cancer had spread to his weakened bones and doctors were starting to see a decline in his health. It was hard for him to spend Christmas in the hospital.

“He was normally cheery and joking, and he got really quiet and moody.”

“It was stressful for us,” Irene says. “He was normally cheery and joking, and he got really quiet and moody.” In the New Year, the decision was made to transfer Alex to St. Peter’s Hospital’s (SPH) for Palliative Care Program. There, he was able to come to terms with his illness.

His family and friends started to see their happy-go-lucky Alex slowly return.

“I remember leaving the hospital one morning, feeling guilty for leaving him there, away from his home and family. When I returned that evening, I was pleasantly surprised to see that the Alex I knew and loved had returned to his old, happy ways.” says Irene. During his time at SPH he developed a close relationship with one of his occupational therapists, Carla Floriani, and one of his nurses, Kim Dixon.

Both Irene and Alex loved that Kim referred to them as Mom and Dad.

“Alex’s sense of humour and values reminded me of my own dad,” recalls Kim. “I’m not sure when I started calling them Mom and Dad, but it stuck.”

It was becoming clear that Alex would not make it to that trip.

March 4th of 2016 marked 49 years of marriage for the couple, but both Alex and Irene suspected it might also mark their last anniversary together. In the fall before Alex was admitted to HGH they booked a trip to Nova Scotia for 2017 to celebrate their 50th wedding anniversary. It was becoming clear that Alex would not make it to that trip.

One night, after leaving the hospital Irene got a call from Alex.

“He called and asked me if I wanted to get married again,” Irene recalls, vividly “At first I was confused, because I thought he was talking about another man. I took a long pause and he must have caught on, because he said ‘Get married to ME again!’ Of course I said yes, and was so excited.”

Alex’s team at SPH, including physicians, occupational therapists, nurses, and volunteers worked extremely hard over the following week to make Alex and Irene’s wish come true. Leading up to the event, the team ensured that Alex spent regular time in his wheelchair in order to increase his sitting tolerance for the ceremony and reception. The ceremony was held on May 13th, 2016, in the SPH chapel, where Chaplain Peter Lopinski led them through their vows. Alex and Irene’s children, grandchildren, and great-grandchildren attended along with all of the hospital staff. They made sure his oxygen tank was monitored at all locations and changed throughout the day, and with the help of his family, dressed him in a tuxedo t-shirt to make sure he was both classy and comfortable.

“The ceremony was beautiful and so emotional,” says Floriani. “Everyone in the room shed tears of sadness and joy.”

“I was so emotional, mostly happy, but there was that underlying sense of the fact that he wouldn’t be around much longer,” Irene recalls. “It was wonderful to create that memory with him. He looked so handsome and I’ll always remember what it felt like to marry him again.” A white, heart shaped, spice cake, beautifully decorated by Alex’s sister completed the ceremony.

“I told him I was brave and would be okay…It was like he needed to hear me say that.”

Over the next few days the newly remarried couple focused on savouring their last days together. Alex’s health started to decline, and Irene began sleeping at SPH so he wasn’t alone. She and Alex would stay up late talking and spend their days remembering near and distant family memories. Alex did not want to leave Irene and their family, as he had been their caregiver for so many years. On the night before Alex died, Irene assured him that she was strong.

“I told him I was brave and would be okay.” says Irene. “Just a couple hours after that conversation, Alex passed away. It was like he needed to hear me say that.”

Irene is preparing to spend her first Christmas without Alex. She knows it will be a difficult time without him, but she’s comforted by the happy memories they were able to create in his final days.