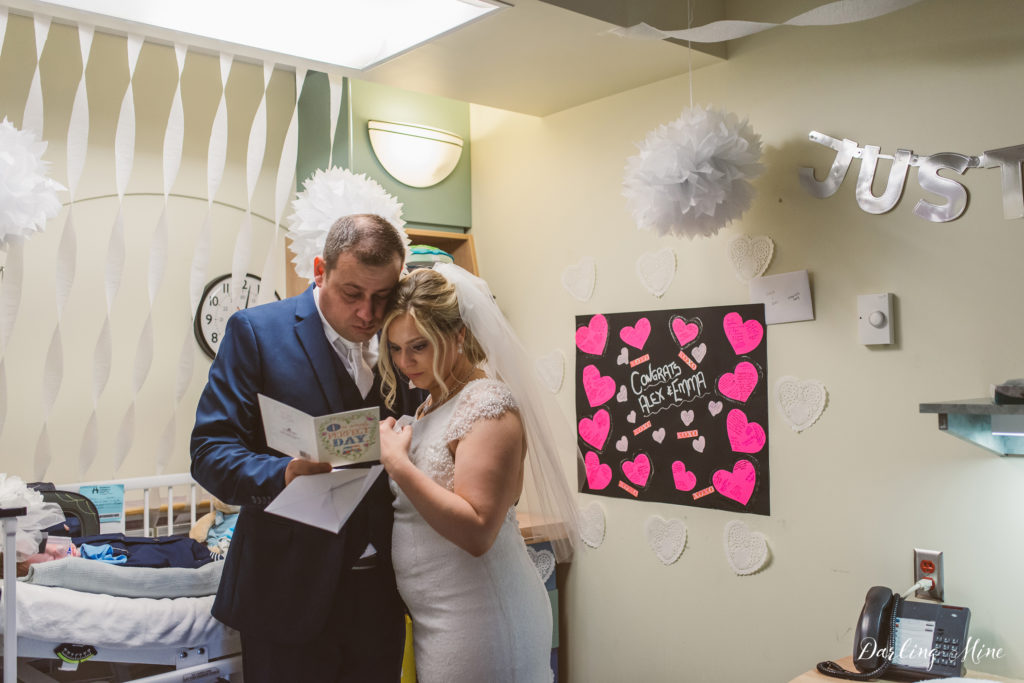 A wedding for baby Beau
Stories

A special celebration for baby Beau

When Emma and Alex learned they were having a baby boy, they envisioned him being carried down the aisle at their upcoming wedding. In September 2016, dozens of Alex’s family members from Australia would be flying in to celebrate their big day.

Emma’s pregnancy was relatively normal, but ultrasounds showed that the baby had clubfoot. As a precaution, the couple, who are from Niagara, decided to deliver at McMaster University Medical Centre.

When Beau was born in May, doctors whisked him away. He wasn’t breathing, and it soon became clear that something was seriously wrong. Beau was transferred to the Neonatal Intensive Care Unit (NICU) at McMaster Children’s Hospital.

“That little baby just had so much love in his life.”

“We didn’t know what was wrong with him, but he couldn’t breathe without a machine, and he didn’t cry, or move,” Emma recalls. “It was really hard not knowing, but we kind of held out hope that he would get better.”

Beau and his family quickly won over the hearts of the staff in the NICU that were caring for him. One of his primary nurses, Cristina DaSilva, soon earned the title “Auntie” and developed a special bond with the family. “It was just so amazing to see how much they loved him,” says DaSilva. “That little baby just had so much love in his life.”

Over the next few months, the team tried to diagnose what was causing Beau’s problems. They kept him as comfortable as possible and he continued to charm his parents, passing little milestones in his life.

As their September wedding date drew closer, Emma and Alex began to realize that Beau wouldn’t be able to leave the hospital on their special day.

“We wanted to make sure we could celebrate with him,” says Mastoris. “It was important to us that he was part of that day.”

The couple decided that they would drive back to Hamilton from Niagara with their photographer after the wedding ceremony, and take some special photos with Beau. Emma had purchased a tiny suit for him to wear.

“When we heard about their plan, we wanted to make sure that time was special for them,” says Alex Koehler, another of Beau’s primary nurses. “Me and some of the other nurses started gathering wedding decorations, and we strung a whole bunch of doilies for the wall where they’d be taking pictures.”

Leading up to the wedding, staff wrote well wishes for the couple on a big poster that would be hung in Beau’s room. The night before, Koehler and her colleagues set to work decorating the space in white. They hung streamers, tissue paper flowers and wedding bells.  She penned a letter from Beau to his parents and strung the backdrop of doilies against the wall where the photo shoot would take place. “It was really a team effort,” Koehler says. “This family really touched all of us and we wanted to do this for them. It was the least we could do.”

The day of the wedding, DaSilva dressed beau in his blue three piece suit, and brushed back his thick hair.

When Emma and Alex arrived, staff peeked out of the rooms they were working in, standing and clapping as the couple walked by in their suit and dress.

“It was really nice to see them all there for us,” says Alex. “When you go through something like this, these people become your family.”

“I knew they were going to decorate a bit,” Emma adds, “but what they did was just so amazing. They did so much for us and Beau, and we are so grateful for everything.”

“He brought us together with these special nurses, who have become like family, and he taught us so much.”

The little family of three spent time together as their photographer snapped photos. For both parents, it stands out as a special memory in Beau’s life.

Beau sadly passed away a few weeks after his parents’ wedding. He had an extremely rare genetic disorder that only four other babies have been diagnosed with.

His life was short, but it was full of love.

“I feel like he was given to us for a reason,” says Alex. “He brought us together with these special nurses, who have become like family, and he taught us so much. We’re so grateful for every moment we had with him.”