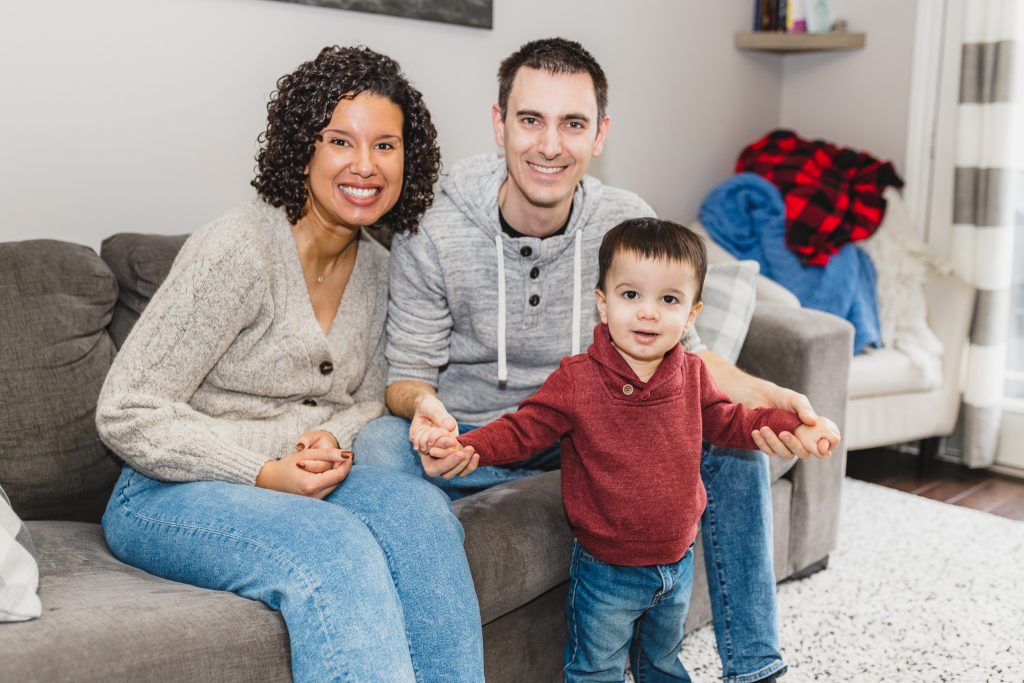 Oliver Robinson, pictured here with his parents Jennifer and Tim, was born with a large, balloon-like birthmark on the side of his neck. Through interventional radiology, the birthmark was shrunk to the point where it’s barely visible.
Stories

Like most of us, Tim and Jennifer Robinson thought birthmarks were a discolouration on a baby’s skin that often faded with time.

But the first-time parents got a lesson on lesser-known types when their son Oliver was born with a birthmark on his neck that was a balloon-like growth rather than a stain.

Birthmarks, called vascular anomalies in the medical field, are growths made up of blood vessels that have developed incorrectly. These growths may be solid or made up of arteries, veins, capillaries, lymph vessels, or any combination of these.

One in 10 children has some kind of vascular anomaly, says Dr. John Donnellan, head of pediatric imaging and pediatric interventional radiology at Hamilton Health Sciences’ McMaster Children’s Hospital (MCH), and site chief. In almost all cases, these children are born with their birthmarks, but they can become more obvious as they age. Most are minor and do not require treatment. 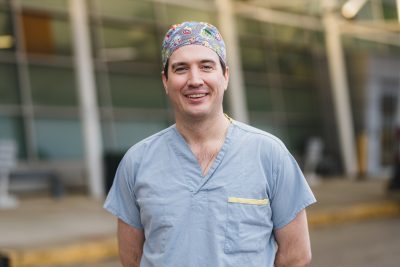 Vascular anomalies are divided into two categories – tumors and malformations. Tumors are the discolourations that often fade with time and can be monitored by a family doctor.

Malformations have three types – lymphatic, venous and arterial. These birthmarks are best treated with interventional radiology.

Interventional radiologists use their expertise to guide tiny instruments, such as catheters, through blood vessels or through the skin to treat a wide variety of medical conditions that in the past would have required surgery.

“Through minimally-complicated procedures, we can make huge changes in children’s lives,” says Donnellan. “It’s incredibly rewarding to help these children and their families.”

“We want the medical community and the community-at-large to know that interventional radiology can do a great deal to help these young patients.” — Dr. John Donnellan

Oliver, now 18 months old, received two treatments as an infant for the lymphatic malformation on his neck. Treatments are done on an outpatient basis, meaning kids can go home afterwards and don’t need to stay overnight in hospital. While Oliver’s growth couldn’t be completely removed, it was shrunk to the point where it’s barely visible. 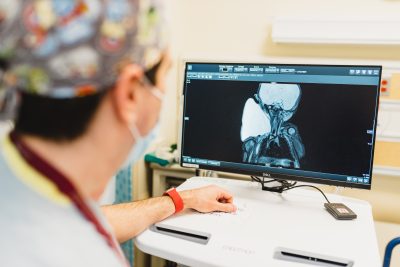 This image shows a large lymphatic malformation growing on the neck of a developing fetus. Dr. Donnellan has treated infants whose growth was larger than their head at birth.

“It’s a birthmark, so it’s not something that can be cured,” says Donnellan.

“But I can certainly make this kind of birthmark smaller by shrinking it down to the size where no one other than the child or parent would notice it. I’ve treated a couple of newborns where the birthmark on their neck was bigger than their head, and can usually get those down to being flat and almost completely gone.”

Oliver’s lymphatic malformation was discovered during a prenatal scan when Jennifer was 32 weeks pregnant. The growth measured 10 cm, and she was referred to MCH for additional tests. “It was very frightening at the time,” recalls Jennifer. 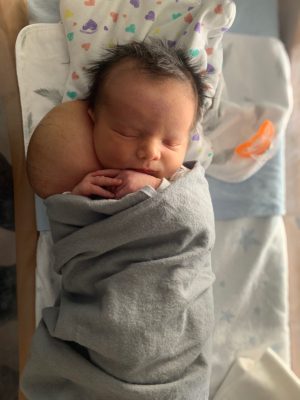 Oliver was born with a large birthmark on the side of his neck. Thanks to treatment at the Pediatric Vascular Anomalies Clinic at McMaster Children’s Hospital, it’s now barely visible.

Further testing showed that the growth wasn’t blocking the baby’s airway, or posing any other danger. The couple was assured that it could be treated, and after Oliver’s birth they were referred to MCH’s Pediatric Vascular Anomalies Clinic where they met with Donnellan to discuss treatment options.

Interventional radiology is the fastest, easiest and most effective treatment, says Donnellan. “Surgery is no longer recommended as a first-line option because once the growth is removed, lymph-producing cysts may form on the scar, making it too wet to ever heal properly. Surgery can actually make the child’s quality of life worse, and then there’s very little we can do about it.”

A lymphatic malformation is essentially a cyst, or sac of skin filled with lymph fluid. It occurs when lymph vessels form abnormally, and are most common on the head and neck. They’re not life threatening and won’t turn into cancer, but they can be uncomfortable and attract negative attention. In some cases, they can also affect mobility if not treated. Oliver’s growth was so large, it forced his head to one side and would have made movements like rolling over next to impossible.

With most malformations, the growth’s size corresponds to the body’s size. So if it represents one per cent of the body at birth, it will remain one per cent for the rest of the person’s life if not treated.

“But as children grow, the birthmark doesn’t necessarily grow in the same direction,” says Donnellan. “As a child grows taller, their birthmark may become more prominent by growing wider. Some birthmarks even swell and shrink repeatedly.” 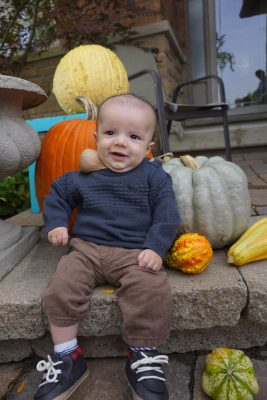 Donnellan treats these birthmarks with a procedure called sclerotherapy, which is best known for treating varicose and spider veins. A needle is used to remove the fluid from the sac, and then a solution is injected into the sac that causes its lining to stick together so the sac can no longer fill with fluid.

After just two treatments, Oliver’s bump is now almond-sized and only noticeable to his parents. It’s expected to shrink even more with time, though it will never disappear completely.

During Oliver’s first treatment, when he was one month old, Donnellan drained 600 ml of fluid from the sac which weighed more than a pound.

“Oliver weighed 10.5 lbs before the procedure and 9.2 lbs after,” says Jennifer. The second treatment, a few weeks later, removed the remaining fluid.

Oliver now has some loose skin around his neck from the empty sac, but it will tighten as he grows. Down the road, if needed, he can have surgery to further tighten any remaining loose skin.

When veins form a nest

Venous malformations: This type of birthmark is treated similarly, but it can’t be as easily shrunk or made less visible. The focus for treating this kind of birthmark is on pain relief.

Venous malformations happen when veins don’t form normally, and are noticeable because the abnormal clump of veins creates a discoloration or a lump on the skin.

“It’s like a bird’s nest, but instead of twigs it’s made of veins,” says Donnellan. “When one of these tiny little veins get a clot, it’s not life-threatening because it can’t travel anywhere. It’s trapped in the mesh of venous channels in a tightly-woven maze. But it causes an acute inflammatory response, so it’s extremely painful, on and off.”

Treatment is similar to what is done for lymphatic malformations and can permanently cure pain in the affected area.

This type of birthmark can also exist inside the body, away from the skin, unseen. “In the past, children who experienced unexplained pain were often diagnosed with growing pains,” says Donnellan. “But I think many of those growing pains were actually kids with venous malformations of their liver or abdomen, because they would get really sore for about a week and then they were fine until another episode weeks, months or even years later.”

When a birthmark can lead to amputation

Arterial malformations: This type is the most difficult, by far, to treat. They happen when an abnormal tangle of blood vessels, usually connecting arteries and veins, disrupts blood flow and oxygen circulation. Treating them involves inserting tiny metal coils or glue via a small catheter into the birthmark to block it off and cause clotting.

“With this treatment, I’m usually trying to prevent the child from reaching an amputation too early,” says Donnellan. “But unfortunately, arterial malformations almost ultimately end in amputation due to pain and skin breakdown from the growing vessels. For example, if this birthmark was on a fingertip, that section of the finger may need to be amputated.”

Donnellan hopes to raise awareness of the Pediatric Vascular Anomalies Clinic among parents as well as family doctors.

“A lot of family doctors aren’t aware we have this clinic. We want the medical community and the community-at-large to know that interventional radiology can do a great deal to help these young patients.”

Note: An earlier version of this story identified some birthmarks as reddish or strawberry-like stains on the skin, when in fact they may appear as discolouration in other colours as well. 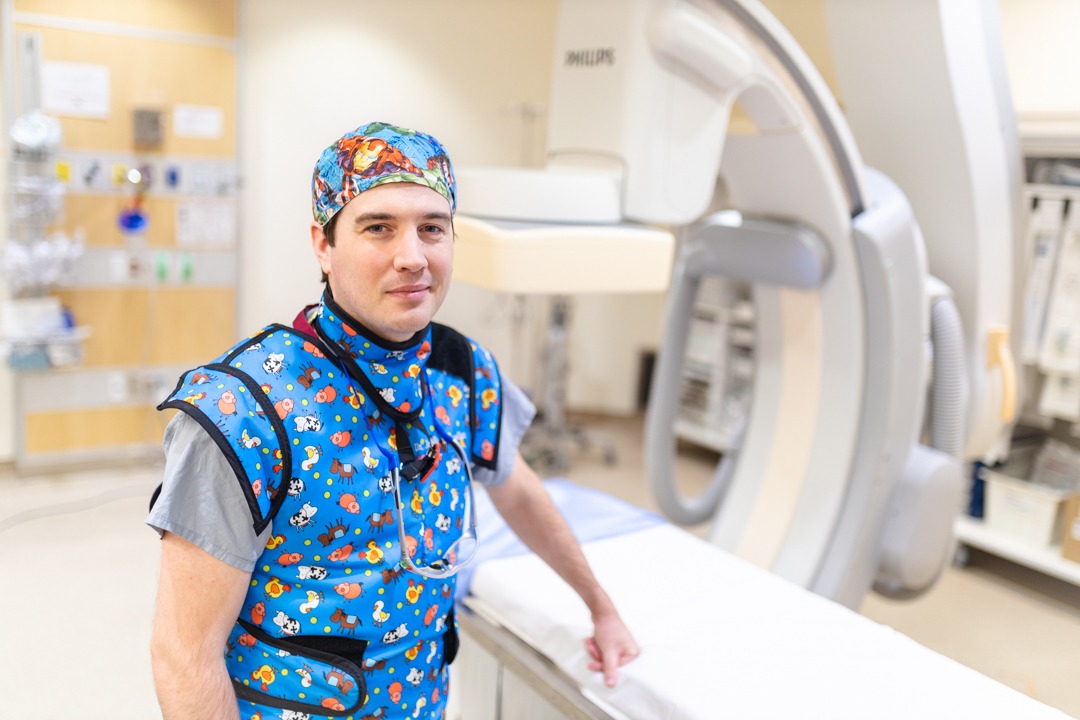 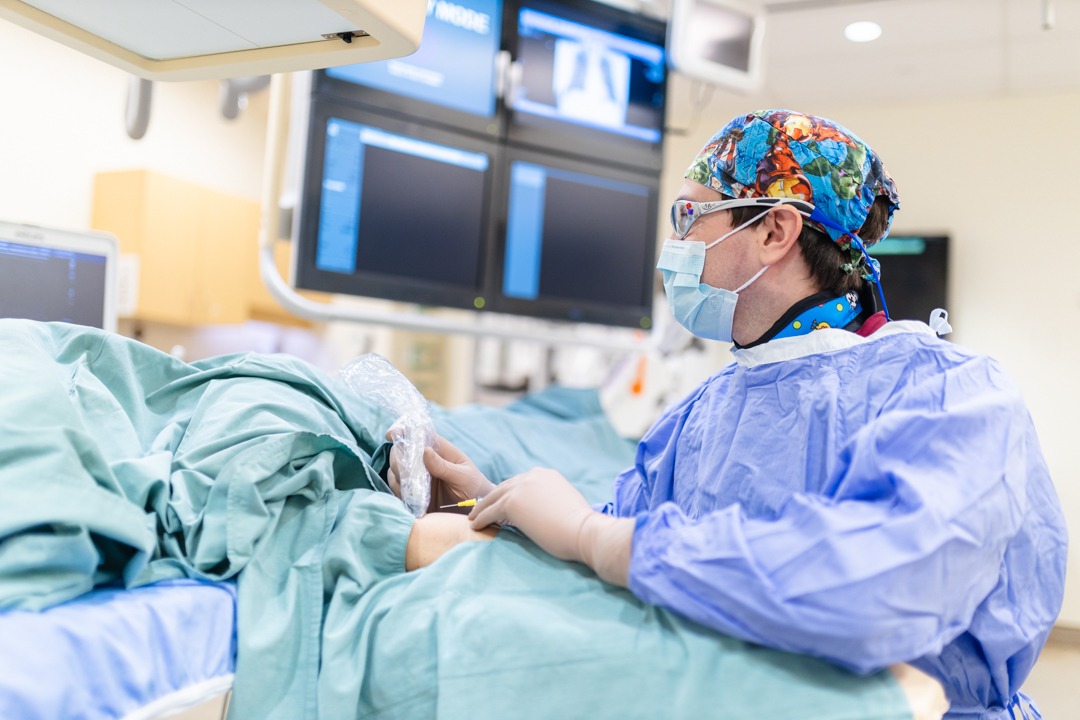