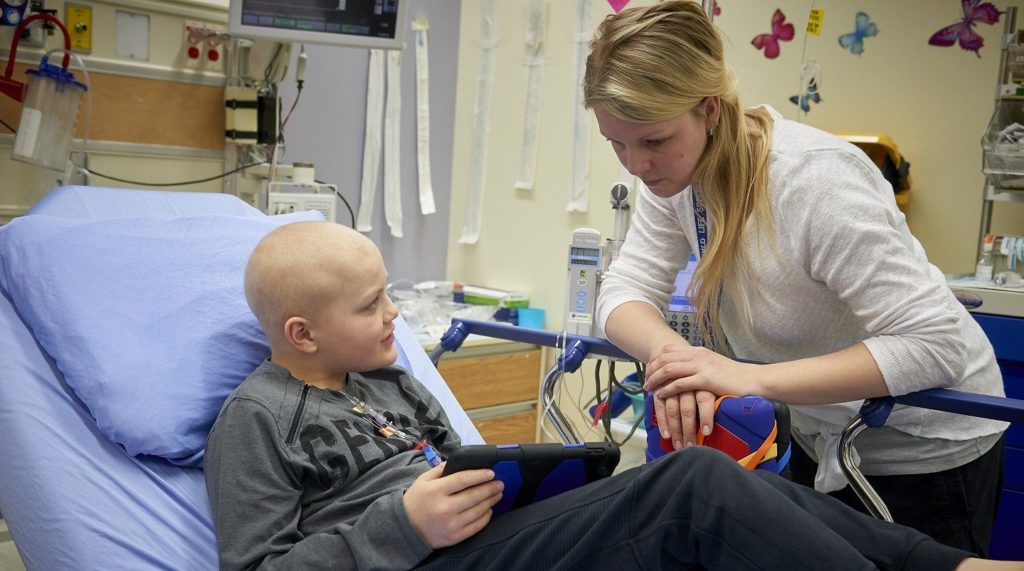 Chase from Cambridge was an active nine-year-old who was passionate about hitting home runs and scoring goals. Then he found himself unable to participate in sports because of a life-altering diagnosis.

“My son was diagnosed with cancer,” says Chase’s mother, Jaymie. “As a parent, it was the most difficult news I’d ever received.”

Chase’s cancer journey began with a persistent fever and weight loss. On the recommendation of their pediatrician, Jaymie took him to the Emergency Department at McMaster Children’s Hospital (MCH).

Testing led to a diagnosis of leukemia, a potentially fatal cancer of the blood and bone marrow. Chase began a regimen of intense chemotherapy to control the growth of cancer cells. Chase with Child Life Specialist Courtney Knight. Both photos in this article are courtesy of Carole & Roy Timm Photography.

“The treatment made Chase feel very sick, but we understood that chemotherapy was necessary if we were to beat the leukemia,” recalls Jaymie.

After trying different types of chemotherapy, the care team found the right combination of medications that worked well for Chase.

“We are looking forward to the end of his therapy, when we can say that he is cancer-free.”

“One of the most difficult things for Chase is being sidelined from the sports he loves. He’s had to miss a lot of baseball and soccer because of the cancer, which makes him feel left out.”

Chase’s prognosis is very positive and he is doing well in his treatment. Despite the challenges he has faced, he is more determined than ever to beat the cancer.

“We are looking forward to the end of his therapy, when we can say that he is cancer-free,” says Jaymie. “There is definitely a light at the end of the tunnel.”

As he continues to regain strength, Chase looks forward to spending more time outdoors, enjoying the sports he loves. He is grateful for the outstanding care he received at MCH, which has become like a second home to him.

“The doctors and the staff are wonderful,” says Jaymie. “We’re so lucky to have this amazing Hospital in the region to help us when we need it most.”