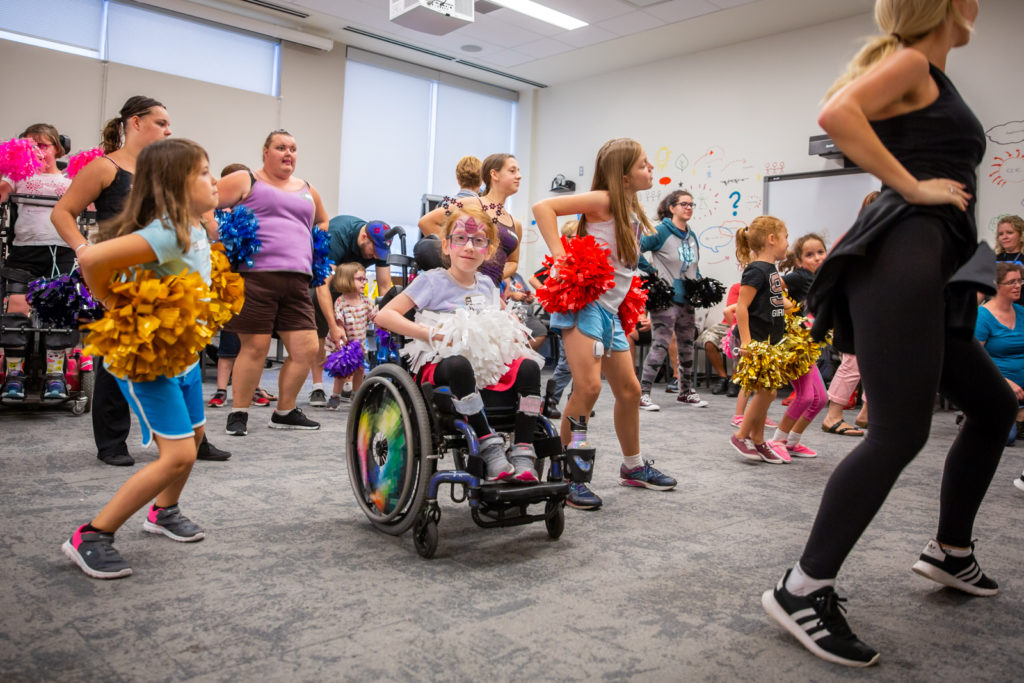 A group of very special kids took to the field during halftime at the Hamilton Tiger-cats game this Saturday. Some of them walked onto the field, some wheeled. They all cheered their hearts out. They are the Ron Joyce Children’s Health Centre (RJCHC) cheer squad. The squad launched in September of 2018 with a goal of giving clients at RJCHC a chance to participate in an inclusive activity. Both children with physical and developmental disabilities, and typically developing children are encouraged to join so they can learn from each others’ experiences.

RJCHC provides a range of services to children, youth, and adults in our region, many of whom are dealing with life-long health issues. The centre’s programs include Autism Spectrum Disorder Services, Developmental Pediatrics and Rehabilitation, Prosthetics and Orthotics, and Child and Youth Mental Health. “We’ve noticed that children who use our services and their families often feel isolated because they can’t always take part in typical community programs,” says Lindsay Bray, clinical leader of Developmental Pediatrics and Rehabilitation at RJCHC. “This puts them at risk for developing secondary mental health issues which is why programs like the RJCHC cheer squad are so greatly needed.”

“These kids see each other for who they are.”

Lindsay and her team launched the cheer squad with support from parents of clients at RJCHC. One of those clients is Makayla Benner. She’s twelve years old and has been dancing for most of her life. Her mom, April, wanted to get her involved in cheerleading, but was unable to find a squad that would accommodate her needs. Makayla has Pitt-Hopkins Syndrome, a genetic disorder that affects her development, along with autism spectrum disorder.

“There are kids in wheelchairs, in braces, and everyone is helping everyone,” says April, of the scene she enjoys watching during practice. “These kids see each other for who they are.” Makayla’s typically developing friend and classmate has also joined the squad. April says it’s heartwarming to watch her daughter have fun with her peers.

Learning to cheer from the pros

There are already nearly 50 children enrolled in the squad. Former Hamilton Tiger-cats cheerleaders, Tanisha McDermott-Hansen and Dominique Krawchenko, coach them through weekly practices. Knowing they would be performing at the Tiger-cats game gave the squad great motivation to perfect their routine.

“As a mom who has a child with special needs, it’s always emotional to see her perform,” April says, of watching her daughter cheer at the half-time show. “It’s a different world for her, so when she gets to have these experiences, it’s meaningful.”

“We want to make our kids and families feel that they truly “belong” in our community.”

Lindsay says she and her colleagues have already seen a tremendous impact on the kids.

“We provide services to support these kids physically, mentally and developmentally, but this social support is also greatly needed. We want to ensure our kids and families feel that they truly “belong” in our community.”

The cheer squad is funded in part by a grant from the Hamilton District Society for Disabled Children.