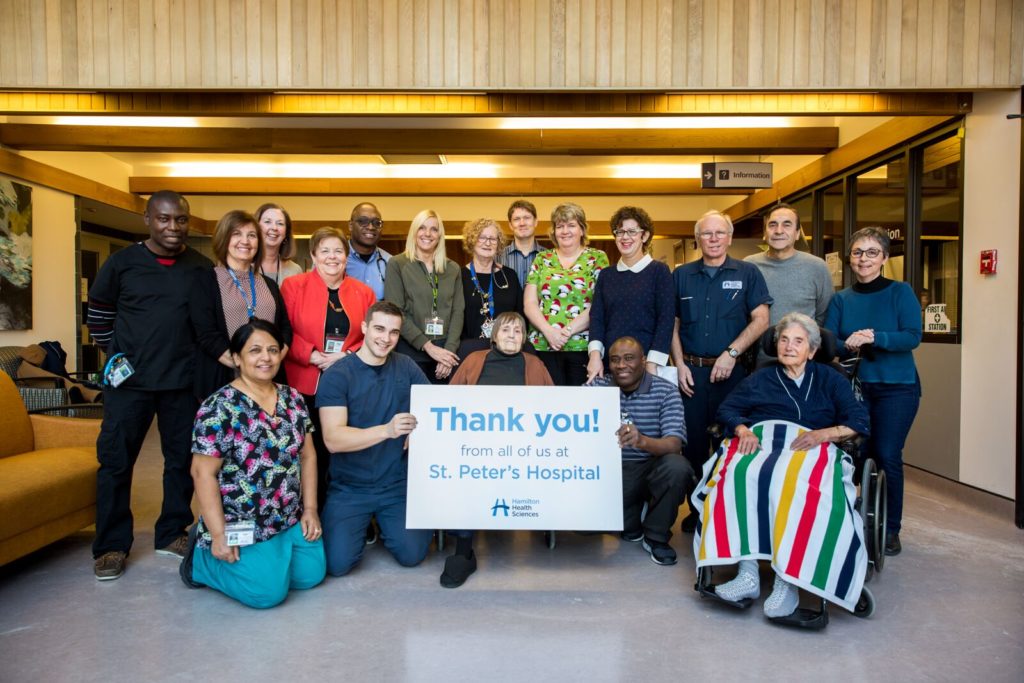 It was a quiet Sunday morning at Hamilton Health Sciences’ St. Peter’s Hospital in early November when the calm was suddenly broken by the shrill sound of fire alarms. Staff wondered for a minute if it was a drill or false alarm. Then they smelled smoke coming from the decommissioned south wing of the hospital and sprang into action.

As fire trucks came wailing up Maplewood Avenue, our St. Peter’s team was quickly assessing the options for response: Would they need to move out all patients? Was the fire contained or spreading? If evacuation was necessary, it would have to be done with the utmost care and gentle handling — many of our patients at St. Peter’s are frail, many are medically complex, and many are older adults. St. Peter’s is also the home of the country’s largest in-patient palliative care unit.

As first responders battled the blaze, patients were transferred to the east side of the building, as far removed as possible from the fire location. Staff, physicians and managers came rushing in to help from their day off as news about the fire quickly spread; family members helped, too. People in beds were moved to the auditorium, while those in wheelchairs were clustered in the lobby and adjoining hallways. Coffee and snacks were spontaneously and generously donated from the neighbourhood Tim Hortons and Little Caesars to keep everyone well fuelled.

The fire was contained to an area of the hospital used only for storage but neighbouring patient care units were closed due to smoke damage. While 138 patients were able to return to their rooms by evening, we had to move close to 100 others, accompanied by staff.

Like any hospital, Hamilton Health Sciences trains and prepares diligently for emergencies of all types. Our training was tested that day. And the real-life experience brought home to us how a crisis at one hospital affects and involves our health care partners across the region.

An evacuation of this scope would be challenging at the best of times, and this isn’t the best of times, with most Ontario hospitals running at more than 100 per cent occupancy. Yet somehow, incredibly, without a second of hesitation, our partners made room when our patients needed safe harbour.

St. Joseph’s Healthcare Hamilton welcomed 13 patients. Joseph Brant Hospital in Burlington generously took 20. Fifty-four patients were transferred to other Hamilton Health Sciences sites. Six were taken in by regional hospices — Dr. Bob Kemp and Emmanuel hospices in Hamilton, McNally House in Grimsby, Carpenter Hospice in Burlington and Stedman Hospice in Brantford. Another three patients moved to long-term care homes for which they were already on the waiting list. These transfers took place smoothly and competently with the help of Hamilton EMS, DARTS and Toronto EMS, while HSR buses were at the ready in the event of a larger evacuation. The Hamilton Niagara Haldimand Brant Local Health Integration Network was involved and supportive throughout.

In the weeks that followed there was no shortage of challenges for our St. Peter’s team, who had to work around the inconveniences of having no on-site food services, laundry, pharmacy or shipping/receiving. Across Hamilton Health Sciences, our people went the extra mile and then some to keep delivering the best care to the remaining patients at St. Peter’s and those being cared for at alternate locations. Our patients and their families were understanding and supportive despite all the upheaval.

By late November, as services were reinstated, we were able to begin bringing patients back from their temporary locations. Fittingly, everyone who needed to return to St. Peter’s for their care and treatment had done so by the time we lit the holiday lights in the courtyard of the hospital, one month after the fire.

The joy of the Festival of Lights at St. Peter’s was magnified this year by our feelings of gratitude. The fire didn’t spread to patient care areas. Everyone was safe. And this experience, which no one would wish for, nevertheless showed us how deeply we can rely on not only our own Hamilton Health Sciences team, but our friends in the extended health system.

Literally hundreds of people across our city and region helped us manage this crisis, both on the day of the fire and in the weeks that followed. In a season of giving, this support was the greatest gift we could ask for. On behalf of St. Peter’s patients and their families, as well as our staff, physicians and volunteers across Hamilton Health Sciences, thank you for reminding us of the generosity and compassion that abounds in our region, and for helping us to be “home for the holidays.”