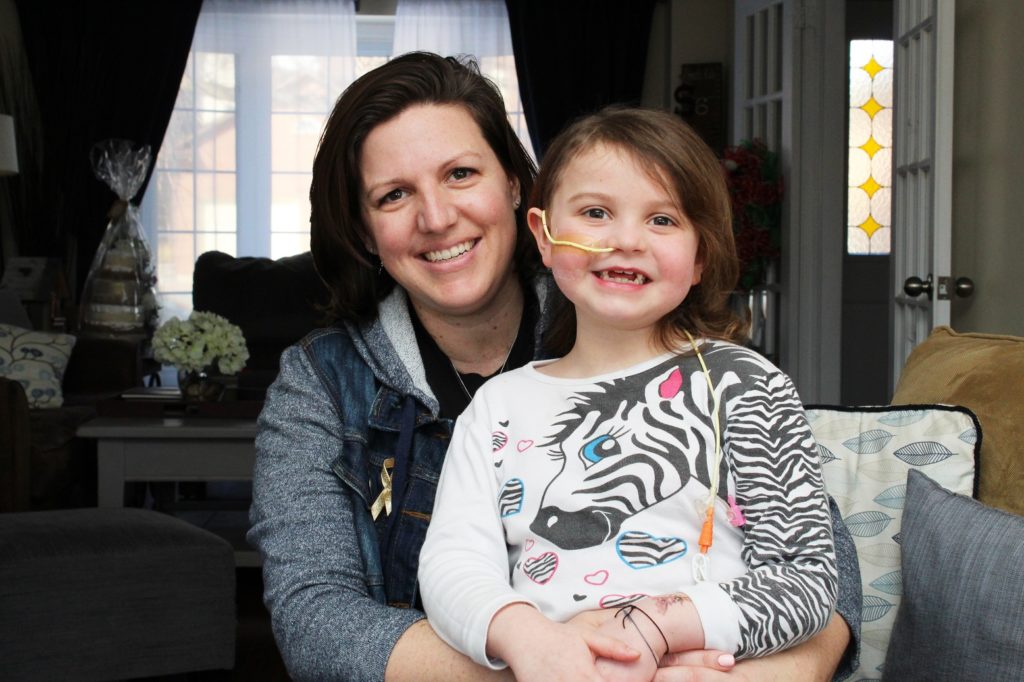 “When Maddie was born, she tested positive for the gene that may cause cystic fibrosis (CF),” recalls Keri-Lyn from Burlington. “That was the beginning of her journey with McMaster Children’s Hospital (MCH).”

At the age of three weeks, Maddie began more than a year of testing and monitoring with genetic specialists. This led to an official diagnosis of CF in 2015.

CF is a genetic condition that can lead to serious breathing and digestive issues. Luckily, Maddie’s CF was mild.

“When Maddie was three years old, she became unusually lethargic,” says Keri-Lyn. “Then she started to get little red dots on her face.”

Blood work led to another shocking diagnosis – Maddie had leukemia. Her treatment with chemotherapy began immediately at MCH.

“The whole experience has changed our family for the better.”

“She lost her hair within three weeks and she experienced horrible headaches and discomfort in her belly. The hardest part was watching helplessly as my child was in pain.”

Maddie faced numerous complications, including inflammation of her pancreas and the membranes around her brain and spinal column. She underwent two blood transfusions and a platelet transfusion, as well as several lumbar punctures to collect spinal fluid for testing. A nasogastric (NG) tube was also inserted every month to deliver vital medication.

Her hair began to grow back eight months after the start of chemotherapy and Maddie regained strength with each passing day.

“After three years, we reached a major milestone when she finished her chemotherapy this past summer,” says Keri-Lyn. “She no longer has any cancer in her body and we’re excited about what the future will bring.”

Maddie enjoys being back in school, where she can spend more time with friends.

“The whole experience has changed our family for the better and brought us closer together,” says Keri-Lyn. “We’re grateful to the team at MCH, who helped us every step of the way.”