A stroke is a medical emergency. If you or a loved one is experiencing signs of stroke, don’t stay home. Call 911 right away.
Stories

Most days, 89-year-old Stefan walks six blocks around his Hamilton neighbourhood. But about a month ago, as he was returning home with his walker, his left side gave way. He managed to get himself to his backyard before falling to the ground, where his house cleaner saw him and called 911.

Stroke is a medical emergency 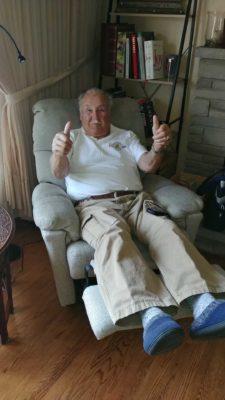 Stefan was brought to Hamilton General Hospital (HGH) where a CT scan revealed he had significant atherosclerosis — plaque build-up — in his blood vessels, common in people as they age. He was given IV fluids to keep his blood pressure up to support blood flow to the brain. Stefan was making improvements so he didn’t require a TPA, or “clot buster” medication, instead, he was given oral blood thinning medications. An MRI confirmed Stefan had a minor stroke.

After just a few days in hospital, Stefan was walking around the unit with the help of his physiotherapist. Four days after his stroke, he returned home.

“He is very independent,” says his daughter, Loren.

When it comes to stroke recovery, “time is brain.” The quicker you receive treatment, the more likely it will work. That’s why it’s so important to not delay a visit to the emergency department.

Part of Stefan’s successful recovery was due to how quickly he received care. He was seen in hospital less than an hour after his stroke.

“Stefan had an uncomplicated recovery in hospital and responded well to all his initial treatments,” says stroke specialist Dr. Kelvin Ng.

Stefan volunteered to be part of a global study being led by Hamilton Health Sciences (HHS) and McMaster University’s joint research institute, Population Health Research Institute (PHRI). The AXIOMATIC study hopes to reduce the risk of a stroke recurring in patients who are at the greatest risk.

Stefan was flagged as someone at high risk for another stroke. He has many risk factors including high cholesterol, heart disease, hypertension, and advanced age.

Studies show the risk of a stroke recurring in the first few weeks is as high as 1 in 6 in some patients. After three months, the risk can drop progressively to around a 1 in 50 chance of experiencing a stroke every year. Researchers are exploring how new blood thinning medications could have the potential to reduce this risk before the three-month mark.

“Stefan is an inspiration to us and living proof that we are never too old to make a difference for others after us,” says Ng, who is also a PHRI researcher involved in finding new treatments for patients with strokes. 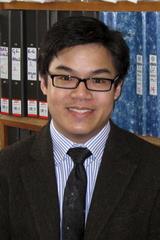 “Strokes don’t just affect your arms and legs, but also your energy levels and ability to focus —and that’s not something you can see,” says Ng.

That’s why a nurse practitioner checks up on HHS patients virtually after they return home, and can connect them with community services or their primary care provider to ensure they are on the road to recovery.

“By the time he was discharged home, he was back to his baseline. Back to his usual self,” says Ng.

Stefan will continue his follow-up care with the Stroke Prevention Clinic and the AXIOMATIC study.

Loren wants to thank the team at HGH for caring for her father.

“Their care for him and this research project and all the good work that is happening is fantastic,” she says. “We’re happy to be part of it, even though it came from this terrible, frightening thing.”

Watch this message from our team.

If you or a loved one is experiencing signs of stroke, call 911 immediately. Even in a pandemic, stroke is a medical emergency. Don’t stay home.