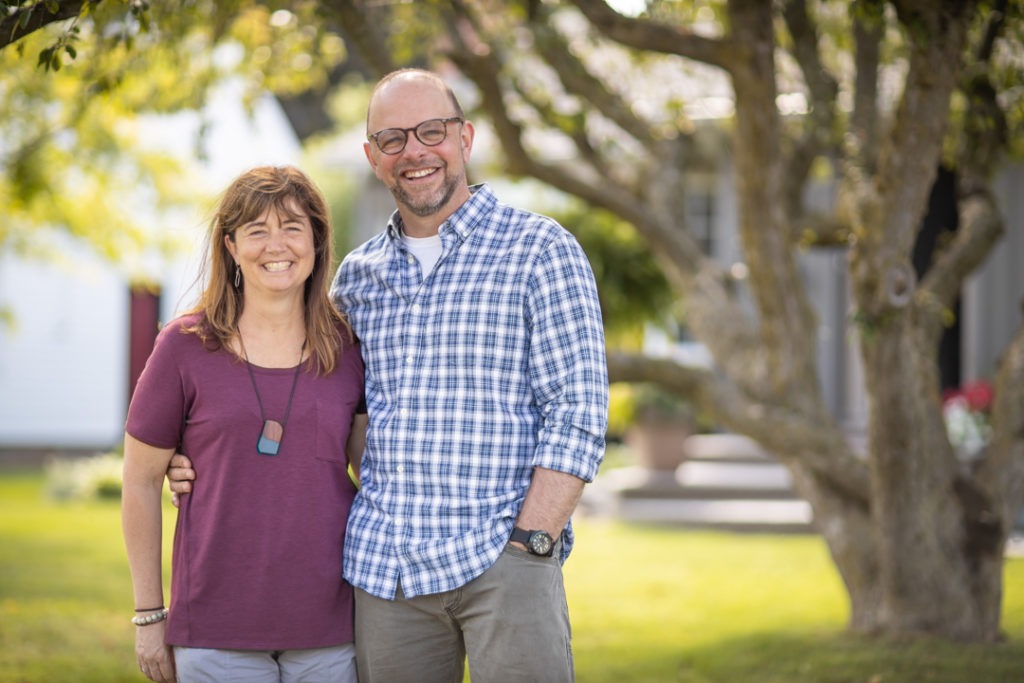 “Time is brain” when it comes to stroke recovery

Just a few weeks ago, Murray Quanz was getting ready for a virtual Mother’s Day visit with his mother-in-law when something went wrong. He and his wife Deborah had finished breakfast and were just about to jump on their scheduled FaceTime call when Murray stepped away to the bathroom. Deborah noticed he was struggling with a drawer, mumbling, and his face was drooping. She recognized the signs of a stroke and called 911.

An ambulance took the 51-year old to Hamilton General Hospital (HGH), the regional stroke centre. The team performed a CT scan of Murray’s head and found the clot in his brain. He was given tPA, a drug to dissolve the clot, and went on to have a procedure that involves threading a wire through an artery in the leg up to the brain to pull out the clot, known as an endovascular thrombectomy (EVT).

“Deborah was the hero of the hour for calling 911 in a timely fashion,” says Dr. Kelvin Ng, General Internal Medicine and Stroke Specialist at Hamilton Health Sciences.

If Murray hadn’t come to the hospital as quickly as he did, the outcome could have been very different.

“In the world of stroke medicine, we have the saying ‘Time is Brain.’ The more time we have, the more likely it is that the available treatment will work. An acute ischemic stroke is like a house on fire. The sooner we put out the fire, the more house we save,” says Dr. Ng.

Deborah wasn’t able to accompany Murray to the hospital due to COVID-19, but, she was kept well informed.

“Communication was wonderful and the effort to help me communicate with Murray after his surgery through FaceTime was really good,” she says. “Even though the situation was horrible, we quickly knew it was going to be okay and we were reassured by seeing him through technology.”

Murray spent three days in the acute stroke unit before being transferred to the stroke rehab unit for a week to work with the team to relearn how to use his body and adapt to the changes.

“I was very thankful that we live so close to a great hospital,” he says.

Visiting the emergency department during COVID-19

Some people have a concern about coming to the hospital during the COVID-19 pandemic due to fears of catching the virus. But Dr. Ng warns that delaying your visit can be the difference between getting your life back or being permanently disabled.

“Life must go on and strokes are emergencies that require time-critical assessment and treatment,” he says. “Don’t delay seeking emergency medical treatment, especially with strokes.”

Murray has a patent foramen ovale (PFO) which is a hole in the heart that is present in approximately 25% of people. The hole is usually very small and does not cause problems for most people. But in a small group of people, this hole could be large enough to be the potential source of clots and even strokes. Murray is due for an appointment with a cardiologist to determine whether they may consider a procedure to close it.

“The fact that Deborah acted so quickly to call 911 combined with the experienced stroke team at HHS led to fast treatment and a good recovery for Murray,” says Dr. Ng.

React F-A-S-T to the signs of stroke. Learn the signs.

Murray and his friend Bob Frisen wrote a song called “Sunshine Up Ahead” to bring positivity to a friend who also experienced a stroke. Listen.