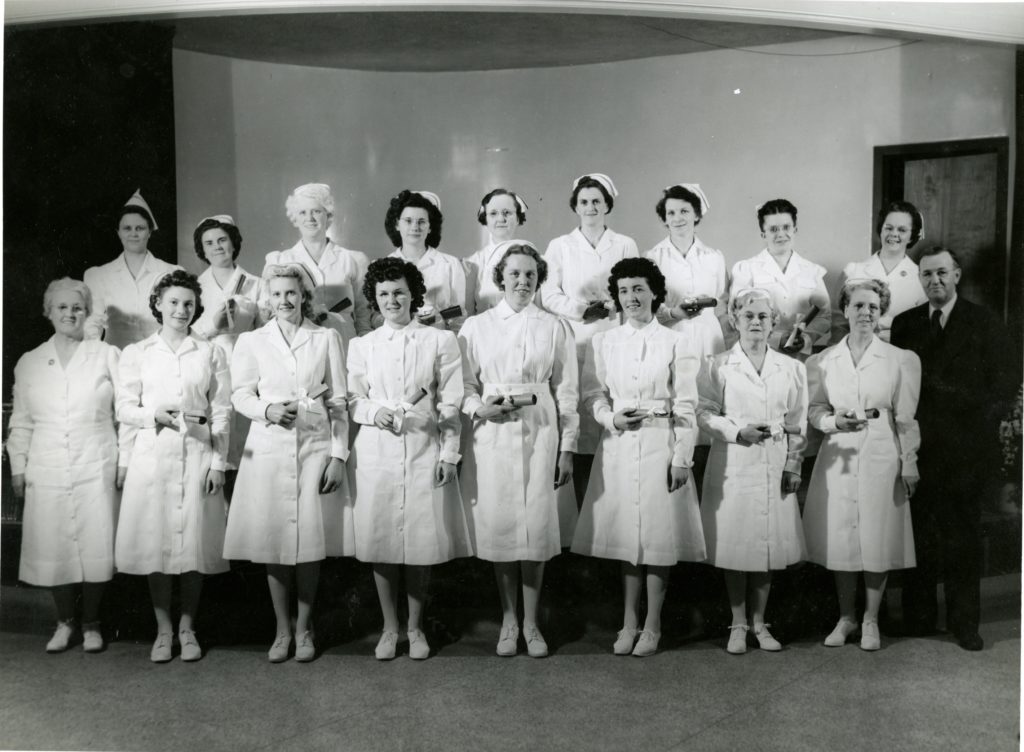 Hamilton Health Sciences is made up of several different sites, each with its own rich history. Four of those sites have existed in some capacity since World War I.

What is now Juravinski Hospital opened in 1917 as Mount Hamilton Hospital at the corner of Upper Sherman and Concession Streets. It was situated there because land was inexpensive and people believed the air on the escarpment to have health benefits.

It had 100 semi-private beds including a maternity ward, an operating room for minor surgery and a nurses residence.

A few decades later, in 1954, the Nora Frances Henderson Convalescent Hospital opened at the southeast corner of that property with a mandate to provide convalescent care and treatment for chronic illnesses. It was named after Nora Frances Henderson, a journalist, politician and activist whose editorial reporting resulted in four women being appointed to the board of directors of the Hamilton General Hospital. You can find her tributes to her throughout Juravinski Hospital, such as the historic display at the main elevator bank on the main floor.

Chedoke Hospital began in 1906 as the Mountain Sanatorium, the fourth tuberculosis sanatorium to be founded in Canada. It was built on a farm that was donated by two businessmen and had only four patients when it first opened. During World War I, soldiers who had been gassed or stricken with tuberculosis were treated here.

Between 1932 and 1951, some of Chedoke’s remaining buildings were constructed including the Evel and Wilcox Pavillions.

The campus housed the Hamilton and District School of Nursing in the Holbrook Building. The first class began their education in 1964.

The Chedoke-McMaster Centre opened in 1968 offering rehabilitation in the Holbrook Building and child and family care in the Evel and Bruce Buildings. That same year, the McMaster University School of Medicine’s first cohort of medical students began their lessons at Chedoke. They had to be taught there until the McMaster University Medical Centre was eventually completed in 1972.

St. Peter’s Hospital was founded in 1890 by Reverend Thomas Geoghegan, the pastor of St. Peter’s Anglican Church. He came to Canada from Ireland in 1870. After visiting Hamilton General Hospital for a number of years, he decided the city needed a special hospital for people with chronic medical conditions.

He fundraised $9000 to purchase the ‘Springer Homestead’ which became the St. Peter’s Home for Incurables. When it first opened it could only accommodate 14 patients.

In 1893 the facility was incorporated and became eligible for provincial grants but only in 1931 was it formally recognized as a hospital under the Public Hospitals Act. With additional funding it was expanded to accommodate 100 patients.

St. Peter’s amalgamated with Hamilton Health Sciences in 2008. It continues to be a leader in palliative and complex care for the community.

The site of Hamilton General Hospital was originally home to City Hospital. The City owned facility was moved from the corner of John and Guise Streets to Barton Street East and Victoria Avenue in 1882 on a plot of farmland that was purchased for $4,600.

The new hospital consisted of three separate buildings set far back from the street and was considered to be a great improvement, having central fireplaces, water closets, gas lighting and dumbwaiters. Patients were moved there from the previous site on October 25, 1882.

The Hamilton General Training School of Nursing was established at City Hospital in 1890. Services were continually expanded; A maternity hospital opened in 1892, and an operating theatre was built in 1893. In 1914, a separate children’s ward was established, funded largely by private contributions and the sale of souvenirs.

In 1917 City Hospital became Hamilton General Hospital. The city’s first cancer clinic was established there in 1938.