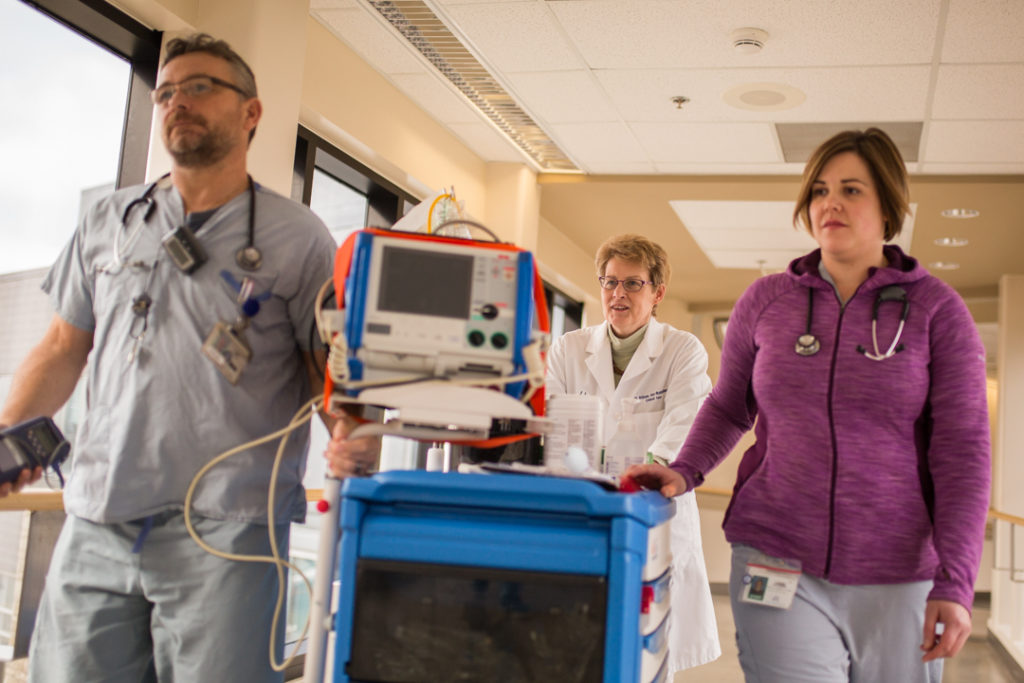 Code Blues used to sound every day at Hamilton Health Sciences (HHS), but an early warning system that measures six vital signs has been used to dramatically reduce their incidence. Now, it can be days before one hears a Code Blue at most of the hospital’s acute care sites.

The Hamilton Early Warning System (HEWS) was developed in 2010 by a team of clinicians at Hamilton General Hospital (HGH) led by Dr. Alison Fox-Robichaud, a critical care physician. By monitoring vital signs such as oxygen saturation, pulse and respiratory rate, the system can quickly determine if a patient is deteriorating to the point that the response team should be called for help.

In most cases, a cardiac or respiratory arrest can be prevented with appropriate intervention. HEWS is the system that triggers that early response from care teams and, so far, the impact has been significant.

By not alerting the team in a timely manner, patient lives can be lost. The situation has been dubbed “failure to rescue”, and can also become a source of costly litigation between hospitals and patient families.

Now, it can be days before one hears a Code Blue.

With HEWS, the vital signs are manually collected and entered and the electronic medical record calculates a score. Based on the number, the nurse is given an alert to call the physician and/or the response team.

While the province of Ontario started funding resuscitation teams in 2006, the concept of a response team was foreign to staff and physicians. Rigorous education and training was implemented at HHS to foster uptake of this new change of practice. Today, the resuscitation – also known as “RACE” – teams are a vital resource.

Dr. Fox-Robichaud observed that with the use of HEWS, the volume of calls to the response team has risen, but the number of transfers to the intensive care unit (ICU) has dropped considerably.

“You do increase the workload, but at the same time, you decrease the transfers to the ICU,” she says.

The original HEWS pilot project in 2010 showed an increased call volume to the critical care response team, but only a minor increase in the number of ICU admissions and a 50 per cent reduction in cardiac arrests on the pilot unit compared to the previous year.

In addition to vital signs, HEWS also scores delirium, which is monitored by nurses.

“It’s a unique factor at Hamilton Health Sciences, and it helps recognize the evolution of sepsis,” said Dr. Fox-Robichaud.

Sepsis is also a major cost for hospitals; in the United States alone, said Dr. Fox-Robichaud, the cost reaches $23 billion per year. She noted that HEWS scoring may be superior to traditional forms of monitoring for sepsis development.

Using the collected data, a score is tallied and the appropriate action can be taken. With a score of three, the charge nurse is informed; with a score of four, a call is made to the patient’s most-responsible physician; with a score of five, the response team is called for an assessment; and for six, a very important intervention must be made. A score of seven will trigger a Code Blue alert.

The system integrates with the hospital’s electronic patient record, which is supplied by Meditech. Currently nurses manually input the data into the system, where the analytics engine calculates scores.

A recent improvement has been the addition of smartphones, which make data collection easier and automates the alerting process.

“We’re moving to mobile,” said Chris Probst, director of HITS Informatics at HHS, who noted the mobile app was created in just ten weeks. The Android phones, which also have integrated bar code scanners to check wristband codes for patient safety, are now being used in the HEWS project.

The app prompts nurses to enter the necessary information about vital signs and delirium. Scoring is automatic, and notifications are sent immediately.

Hamilton Health Sciences is working on analyzing the numbers to determine how many patients have been prevented from ICU transfers since the rollout of the system in 2014. It also has a grad student assessing the selection of vital signs that are used, to determine if they are the best mix.

“This is a prime example of frontline-driven healthcare innovation that’s having a significant impact on patients’ lives.”

What is known is that the system has made a noticeable difference at Hamilton Health Sciences. “Code Blue is now rare, at least during the day,” said Dr. Fox-Robichaud. “You can go for several days without hearing one, at least in the daytime. Now, we’re working on the night-time,” she said, noting there are fewer nurses and other professionals working the evening shifts.

The team is also developing a set of indicators for pediatric care.

Dr. Fox-Robichaud said that other hospitals interested in starting an early warning system must put a premium on communication and training.

“You have to engage your front-line staff,” she said. “Without that, you won’t have success.”

She noted there is a cultural shift that goes along with the new system, as it flattens the hierarchy in the hospital. Nurses can’t be overridden by senior nurses, residents or physicians. “Nurses shouldn’t be prevented from contacting the team,” she said. “It’s not about saving face, it’s about saving lives.”

Recently, HHS has involved IBM Canada through a collaborative innovation partnership to bring advanced analytics to the project, and to explore opportunities to deploy HEWS to other hospitals across the healthcare system.

“This is a prime example of frontline-driven healthcare innovation that’s having a significant impact on patients’ lives,” said Ted Scott, chief innovation officer at HHS.

“By infusing this unique, HHS-born innovation with the world-class technology and business insights of IBM, we’ll be able to develop an effective, invaluable product that will continue to transform healthcare delivery, beyond Hamilton and, perhaps, around the world.”

This is just one of the many digital health projects that are part of our Digital Health Plan.