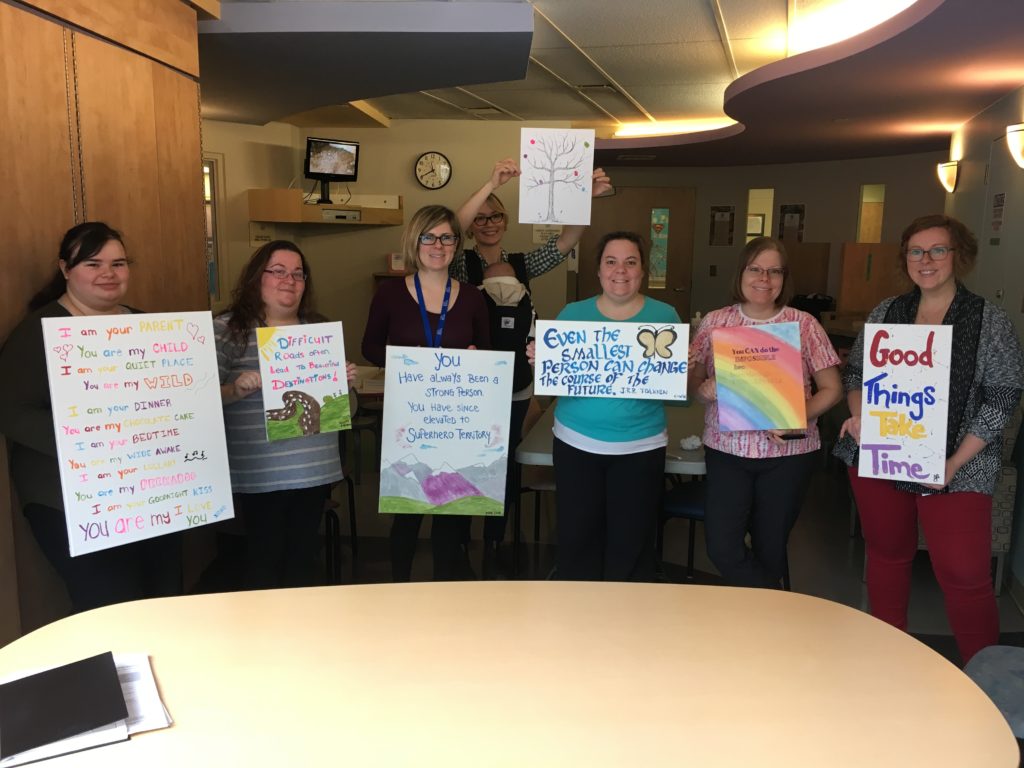 They know firsthand how it feels to sit alone pumping breastmilk in the Neonatal Intensive Care Unit. These NICU moms have been there. While their babies sleep, hooked up to machinery that’s keeping them alive, they pump milk. Milk that will be fed to their little ones who are too weak to breastfeed.

The room they pump in isn’t very big at all. It fits little more than a chair, and on the wall hangs a single informational poster. Most NICU moms spend hours each day pumping, reading the poster over and over. Many of them have it memorized.

“At one of our weekly Snack Chat sessions, someone mentioned that the pumping rooms could use a makeover,” says Marissa Corewyn, Interim Education & Development Clinician in the NICU. “We decided to dedicate a session to creating artwork for the room.”

Building a network of support

Weekly Snack Chat sessions are led by NICU staff, along with volunteer patient advisor, Karen Beattie, whose son spent time in the NICU. Over tea and goodies, these sessions give parents an opportunity to get to know each other, develop a NICU support system and gain valuable information. The topics rotate every week and include self-care and stress management, breastfeeding, safe sleep, and developmental care. Every so often, the group does a craft or activity.

“They want to leave a mark on the unit”

In March, half a dozen moms came out, one with baby in tow, to paint inspirational sayings on canvases that will hang in the pumping rooms.

A message for future moms

“These are the quotes they want to see while putting such immense effort into pumping milk for their babies,” says Marissa. “They want to leave a mark on the unit, trying to boost the spirits of the moms who will be spending time in these rooms in the future.”

They’ve clearly put a lot of thought into the messages they’re sharing. Many are metaphors for the challenging journey of caring for a very sick baby.

“It is such a challenging and uncertain time,” she says. “Being able to get together and talk to people who know what you’re going through is very important. It’s empowering to share your strength.”

That strength, put into words in colourful paint, is sure to uplift the women who’ll be using the pumping rooms in the future. The group that gathered to paint hopes it will make those lonely hours feel a little less lonely.

The McMaster Neonatal ICU has beds for 49 acutely ill infants and a step-down Level 2 Nursery for more stable infants with 14 beds. Every Wednesday from 10:30-11:30, parents of babies in the unit are invited to meet in the family lounge for “Snack Chat” sessions.