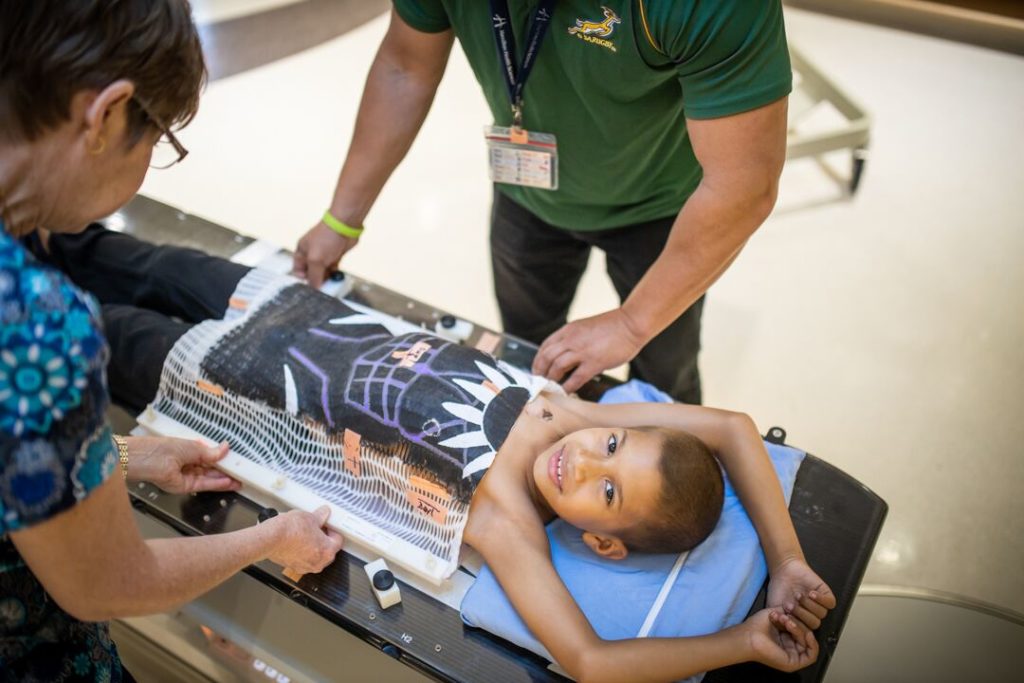 ‘Not all superheroes wear capes’ is a popular saying in hospitals. It’s true. Pediatric radiation therapist, Melanie Carrigan, a hero to many, certainly doesn’t. Her young patients on the other hand do—sort of.

Melanie recently spearheaded a project at Juravinski Cancer Centre (JCC) to make radiation therapy less daunting for kids. While most pediatric cancer treatment is delivered at McMaster Children’s Hospital, radiation therapy takes place at JCC. Melanie’s young patients choose a theme, which often centres around their favourite superhero, and she builds their experience around it. She makes sure they dress the part too.

Turning a necessity into an accessory

During radiation therapy, young patients are often required to wear immobilization casts to ensure they remain very still during treatment. The casts can be tight and intimidating. But with a little paint and creativity, they turn into costumes kids are eager to wear. 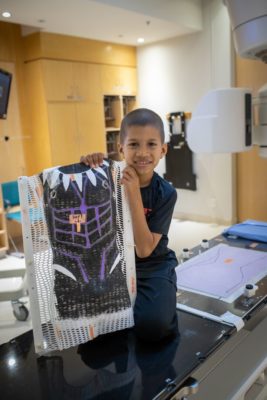 Melanie and the pediatric radiation team began by testing water-based paint and special tape under radiation to make sure the materials didn’t negatively affect treatment. Once they confirmed the paint was safe and wouldn’t compromise the dose of radiation, she began offering patients the chance to transform into a character of their choosing. 7-year old Damian chose Black Panther, a perfect fit for the confident and resilient boy. This was his third time in radiation since being diagnosed with kidney cancer at age 5.

“My dad and I watch it together and I love Black Panther,” he explains.

It was a welcome challenge for Melanie, who spends a lot of her own time painting the casts, but she pulled it off. “I get a lot of joy out of it. These kids go through so much and this makes their days a little brighter,” she says.

A grown up place becomes kid-friendly 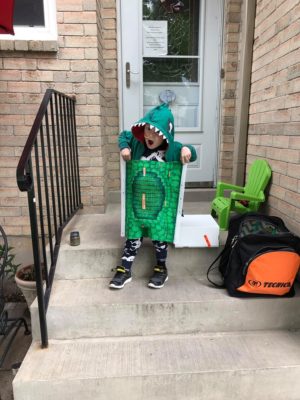 Three year old Charlie, who just finished radiation treatment for a rare muscle cancer, opted for a dinosaur theme. Melanie created a dinosaur countdown calendar to track his progress, along with a reptilian cast. After his last session, the team gifted him a dinosaur outfit.

“He didn’t take if off for two days,” says his mom, Christina. “All the little things they did made the experience so much better. Everyone at JCC, even people we just saw in the café made him feel very special.”

In addition to themed tokens, the pediatric radiation therapy team at JCC makes every effort to create a kid-friendly experience in a hospital built for adults.

“When we found out we would be coming here for radiation, I didn’t know what to expect, since it’s not a children’s hospital, but there have been lots of nice surprises,” says Damian’s mom, Cindy. 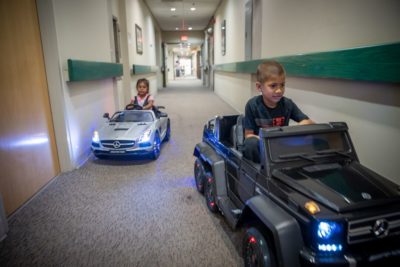 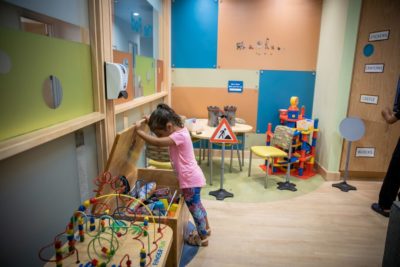 Thanks to a generous donation to Hamilton Health Sciences Foundation, they have a designated waiting room called ‘The Pod’ full of toys and games, and remote controlled cars kids can “drive” to and from the radiation room. Every step of the journey has been considered from a child’s perspective. Because superheroes deserve superhero treatment.