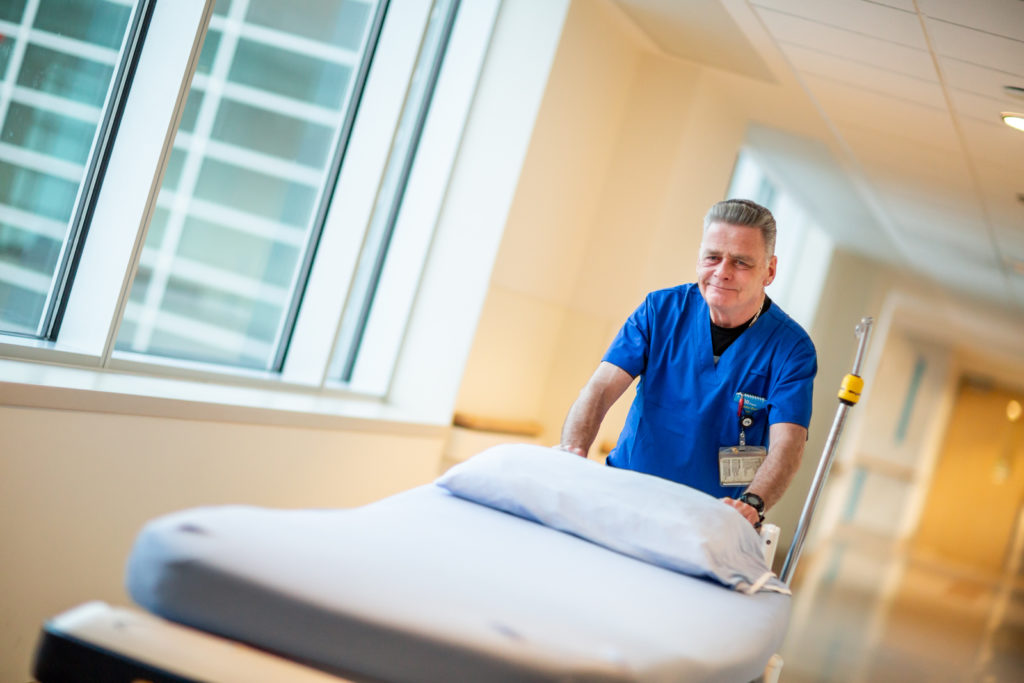 Making use of a relatively new management system, a team of porters huddled to see if they could improve how patients are transported throughout the hospital.

They discovered their solution would not only improve the experience patients have while they’re admitted, but it could also reduce the strain on porters’ time and resources.

“Our team of porters noticed certain hallways were underused or had a specific purpose, such as for emergencies only,” says Dave DiSimoni, manager of customer support services at Juravinski Hospital. “Opening them up for general patient transportation would improve efficiency.”

Using these hallways was like linking up one road to another, essentially creating a new highway that removed all sorts of bottlenecks.

The change improved the time it took porters to transport patients from their unit to the diagnostic testing area where patients receive scans and X-rays.

“We asked ourselves why it wasn’t possible to use those hallways.”

Surveys showed patient satisfaction increased and some even took the time to write letters to hospital staff.

It also reduced the risk of workplace injuries and the use of more costly “zoom” stretchers required for certain inclines in other hallways.

“CQI gave us the opportunity to pursue this issue with a different philosophy,” says Dave. “We asked ourselves why it wasn’t possible to use those hallways.”

As part of CQI, a team must solve a problem on their unit by either assigning it as something they can do right away—termed a ‘just do it’. If it’s more complex and requires additional input from others, they develop what is called an A3.

The A3 process requires staff to ask a series of ‘why’ questions. It forces them to not come up with an immediate solution, but to think about why things are being done the way they’re being done.

This process ultimately finds the root cause of the problem.

Surveys showed patient satisfaction increased and some even took the time to write letters to hospital staff.

They used data to support their outcomes and went through mock scenarios to nail down the new process.

“It was gratifying to see how our team brought this issue to light,” says Jason Morrison, a member of the portering services team. “The problem was solved from the ground up, not top down.”

Because the issue stays on the unit’s white board, it is always front and centre and a solution must be found.

Inspired to work on other improvements

The staff in portering services made a big impact throughout the hospital with this improvement.

Many feel that even though it was a small change, it ultimately helps patients in their recovery. They are now taken down a hallway with better scenery overlooking the mountain brow, rather than going through a series of basement corridors and elevators.

It inspired the team to make other improvements like developing a way to improve patient readiness at the unit level through an automated paging system.

Their environmental aide colleagues are looking at how they can improve the bed turnaround time for the next patient admission.

“What they’re most proud of is how they were able to come up with this solution on their own, rather than having it delivered by someone like me,” says Dave.