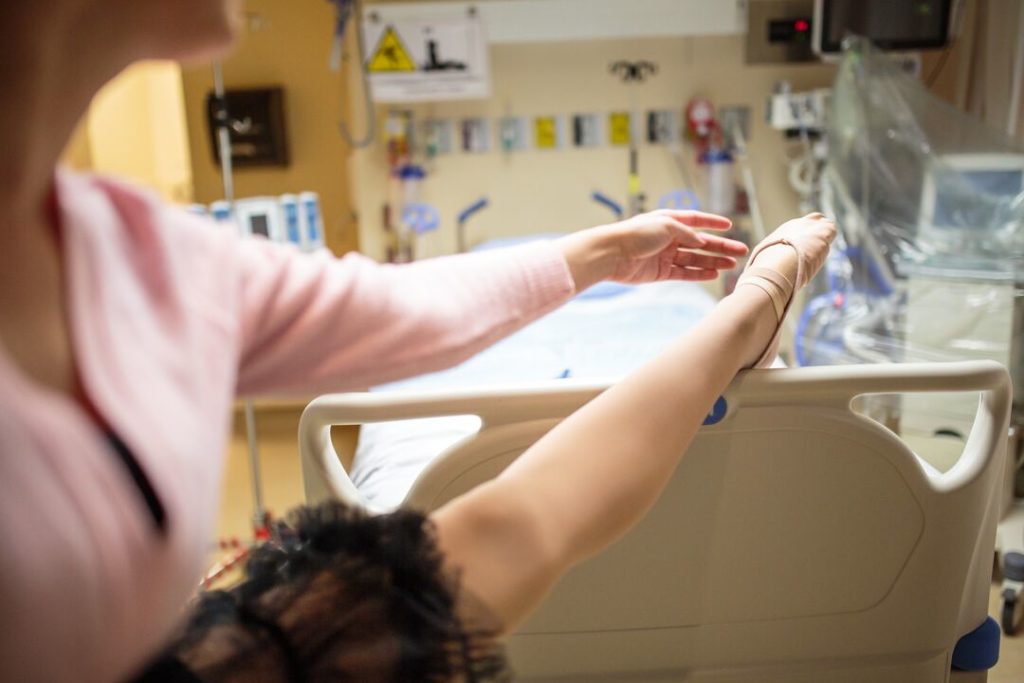 When Barbara Dolanjski arrived in the emergency department at Hamilton General Hospital (HGH), she knew it was serious. She had had two previous encounters with sepsis, and could feel herself getting sicker by the minute.

“This was my third time with sepsis, so my mom and I knew,” recounts Barbara.

Within hours, she was in an induced coma. “She was probably the sickest patient I’ve seen in a decade,” recalls Dr. Cindy Hamielec, who has been working in critical care for over thirty years, and cared for Barbara in the Intensive Care Unit (ICU) at HGH.

Barbara’s sepsis had started as a Strep B infection. When it worsened, her body went into septic shock. Chemicals in her blood that were trying to fight the infection had triggered an inflammatory response, and her body was beginning to shut down.

“We couldn’t do what we do with one piece missing”

When Dr. Hamiliec first saw Barbara, she was going into kidney failure. She and her team started an intense treatment plan. Barbara was receiving three different blood pressure medications. Machines were helping her to breathe, and filtering her blood because her kidneys weren’t working properly.

“Everything in the ICU is a whole team approach,” says Dr. Hamielec. We couldn’t do what we do with one piece missing and everyone was devoted to helping Barbara recover.”

The team knew that Barbara was a ballet dancer. When tissue on the young woman’s feet began to turn purple and die, they feared she might lose them. Medication used to treat sepsis can constrict blood flow. If enough blood isn’t reaching the tips of the body, the tissue can die from lack of oxygen. That’s what was happening to Barbara.

“She was lucky she didn’t lose her toes or feet”

Still in an induced coma, she didn’t realize her care team was fighting to keep her feet. Had things gone differently, she may have woken up unable to point and flex in her ballet slippers.

“She was lucky she didn’t lose her toes or feet,” says Dr. Hamielec. As Dr. Hamiliec finished up her rotation in the ICU, Barbara started to turn a corner. The colour was returning to her feet and she was moved from the ICU to a step down unit so she could continue her recovery.

Still very weak, Barbara was discharged from the hospital with a walker because she couldn’t fully support her weight yet. She also required kidney dialysis for several months. Despite her ongoing health challenges, she was eager to return to work as a teacher and to resume dancing. It wasn’t long before she was back doing both.

Grateful to be alive

Barbara knows that if things had gone just a little bit differently, she might not be here today. If she didn’t know the symptoms of sepsis, she may not have gotten to the hospital in time. If she wasn’t young and relatively healthy, her body may not have been able to withstand the intense treatment and recovery. If she didn’t have a devoted team of experts caring for her, she may have lost her feet.

Her story has a happy ending, but that’s not the case for everyone with sepsis. As many as one in three people who get sepsis die from it. She and Dr. Hamielec hope that by sharing her story, more people are prepared to spot the signs of sepsis when it strikes.

Sepsis is a widely unknown but life-threatening response to an infection anywhere in the body. As many as one in three people with sepsis die. Because signs and symptoms can vary and often mimic those of other illnesses, sepsis is hard to recognize, but it can be treated if caught early. To improve the chance of recovery, it’s important for individuals and healthcare providers to “suspect sepsis” if related symptoms appear.

Sepsis affects all age groups, but some people are at a higher risk of sepsis. Risk factors for sepsis include:

• Having an infection (bacterial, fungal, viral or parasitic)
• Being very young or very old (infants and seniors)
• Having certain chronic illnesses, like cancer or diabetes
• Having a compromised immune system

If you think you may be at risk for sepsis, speak with your healthcare provider about how you can minimize your risk. Some preventative measures include:

• Keeping up-to-date on vaccinations, especially those that help prevent viral infections which may increase your risk of sepsis.
• Caring for wounds properly to prevent infection, and seeking medical attention immediately if you think a wound has become infected. (Click here for a helpful video on wound care.)
• Treating infections promptly. There are many different types of infection and several ways to treat them. If you think you may have an infection, speak with your healthcare provider before your condition worsens.
• Washing your hands, especially if you or someone around you has a weakened immune system, to help prevent the spread of infectious diseases which may lead to sepsis.

Two or more of the following symptoms combined may be a sign that an infection is progressing to sepsis:

If you think you have an infection and notice any of the above symptoms, seek medical attention right away. To learn more about sepsis and how to prevent it, visit canadiansepsisfoundation.ca.