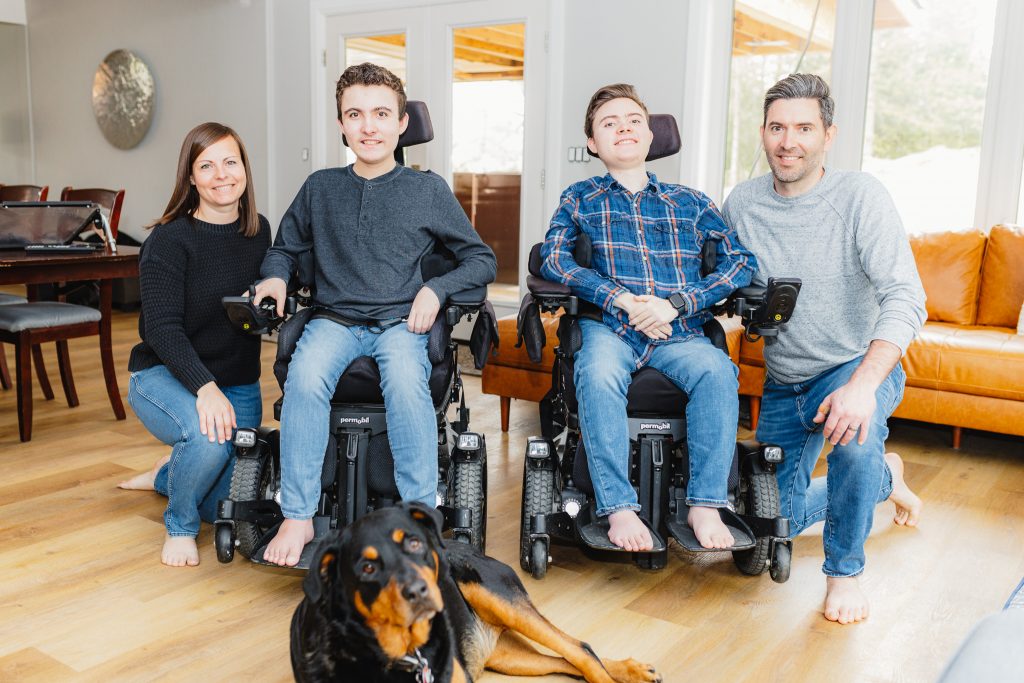 The Cavalier family knows first-hand the anxiety and suffering that surgical delays are causing young patients and their families. That’s why they’re happy to see MCH support the Make Kids Count campaign, aimed at encouraging the province to make significant investments in children’s health. From left to right: Amy, Liam, Kaleb and Josh with their dog Sydney.
Stories

High school student Kaleb Cavalier, 16, has a passion for sports and a gift for statistics that he hopes will score him a career in sports broadcasting. “I love sports, especially hockey,” says Kaleb, whose interests include cheering on his favourite hockey team, the Boston Bruins. His younger brother Liam 13, is the artist of the family, with a keen ear for music and a talent for composing on his tablet and computer.

The Branchton, Ontario brothers were born with Duchenne Muscular Dystrophy, a genetic disorder that gradually weakens muscles and leads to heart and breathing problems that worsen with age. 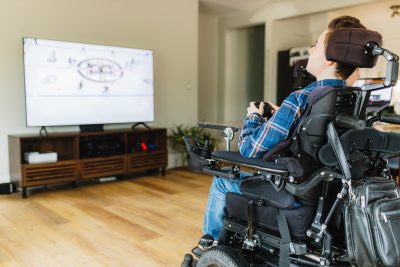 The boys are lifelong Hamilton Health Sciences (HHS) patients, who receive care at HHS McMaster Children’s Hospital (MCH). During the pandemic, both boys underwent scoliosis spinal surgery, performed at MCH, to correct spinal curvatures that were placing increasing pressure on their organs and skeletal systems.

This life-changing surgery made it possible for the brothers to continue living comfortably in their motorized chairs and enjoy all the things they love in life, from family time to school work to music and rooting for the Bruins. But the road back to day-to-day life wasn’t an easy one – especially for Kaleb – due to surgical delays.

Liam’s surgery took place in 2021 — the year after Kaleb’s.  Fortunately Liam’s surgery was not delayed due to hospital ramp-up and increased resources. But Kaleb’s surgery was delayed for months, causing breathing difficulties, pain and even threatening his life expectancy.

“No family or child should go through what we experienced.” — Amy Cavalier, mom

Kaleb’s operation finally took place in the fall of 2020 – after being delayed from May to October of that year when the province directed hospitals to temporarily wind down elective surgeries in response to the pandemic.

As Kaleb anxiously waited for his surgery date, his spine continued to twist, placing increased pressure on his skeletal structure and organs, including his lungs. “It was becoming harder to breathe,” recalls Kaleb. “Also, my ribcage was pressing against my hip bone, causing a lot of pain.”

Kaleb tried throwing himself into his school work to keep his mind off the delays, but it was becoming more and more difficult for him to cope with pain and breathing difficulties. His parents, Amy and Josh Cavalier, felt increasingly helpless and frustrated.

“We were really concerned that his condition would worsen to the point where he no longer qualified for the surgery,” recalls Amy. “Kaleb’s life expectancy also could have been shortened without this surgery. No family or child should go through what we experienced.”

Going to bat for kids

The coalition launched the #MakeKidsCount campaign ahead of the provincial election. The campaign is continuing into the first 100 days of the newly elected government’s mandate to encourage and hopefully secure significant investments in children’s health recovery.

“Barriers to care, which were already significant, have been exacerbated by the pandemic.” — Bruce Squires, MCH president, HHS vice president of women’s and children’s health

Specifically, the coalition wants the province to commit to investing $1 billion over four years in the Make Kids Count Action Plan. It also calls for the convening of a cross-sectoral children’s health summit with government, specialized children’s health care organizations, and health-care providers to develop and release Ontario’s first-ever Children’s Health Strategy. 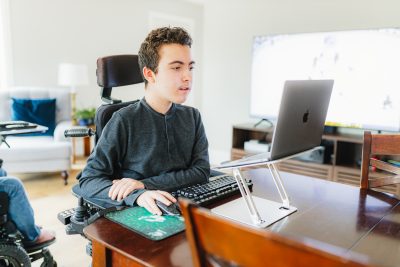 Liam enjoys composing music on his tablet and computer.

Province-wide, more than 4,200 surgeries at children’s hospitals were cancelled between March 2020 and May 2021, and more than 209,000 non-surgical appointments and procedures were cancelled over that same period.

Currently at MCH, 1,300 kids are waiting for pediatric surgeries and procedures. The number of children and youth waiting longer than clinically recommended has grown by 230 per cent at MCH. 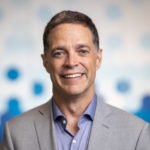 “Barriers to care, which were already significant, have been exacerbated by the pandemic,” says Bruce Squires, president of MCH and vice president of women’s and children’s health at HHS. “Children and youth have had vital health care delayed, faced learning losses, and have experienced devastating impacts on their development, and physical and mental well-being due to these delays.”

Examples of delayed procedures at MCH include correcting curvatures of the spine and operating on displaced hips which can limit mobility and active lifestyles; correcting genital birth defects and preventing against a lifetime of infertility; and addressing cleft palates which can lead to long-term speech issues and hearing loss.

Comparing Kaleb and Liam’s vastly different experiences with the same surgery shines the light on why delays are so harmful.

Liam’s timely surgery took 10 hours while Kaleb’s lasted 14 hours due to his worsening condition caused by delays. Kaleb also had a longer stay in the pediatric intensive care unit post-surgery due to pain management issues.

“Their health-care journeys were like night and day due to the delays Kaleb experienced,” says dad, Josh.

“The team at McMaster Children’s Hospital is great but their resources are limited. Our family experienced first-hand what happens when children’s surgeries are delayed, and we share the hospital’s commitment to delivering timely, high-quality care to all of their young patients. Our hearts break for the thousands of families whose children are faced with delays. It’s our hope that the Make Kids Count campaign will be effective in getting these surgeries and procedures back on track for young patients who have been sidelined.” 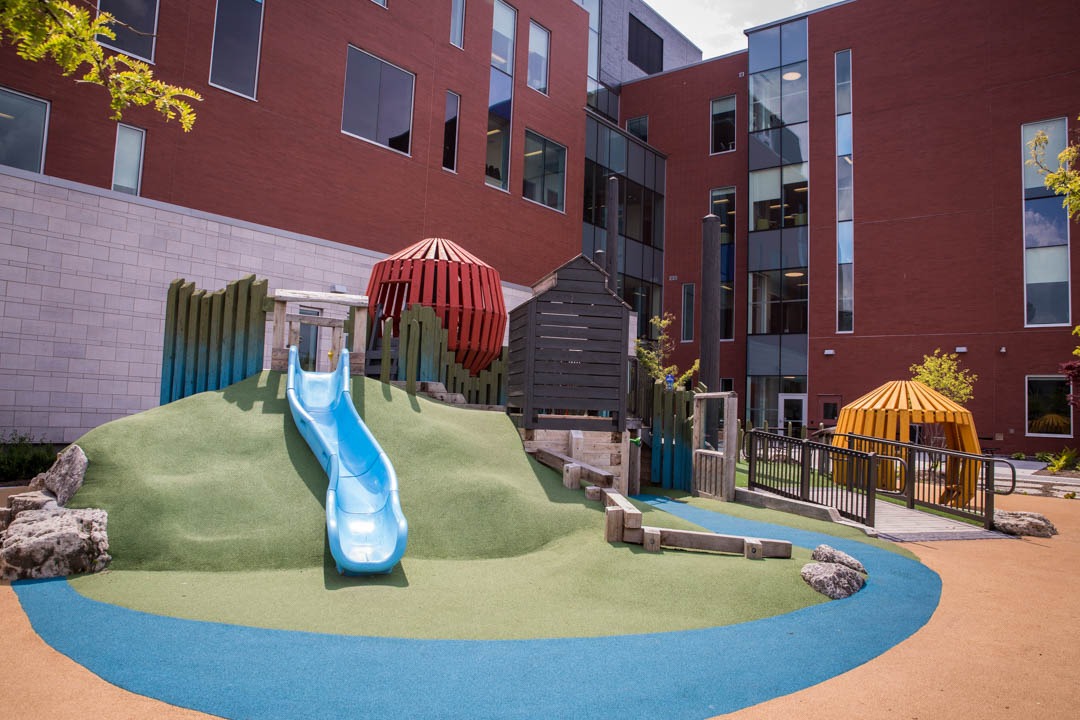 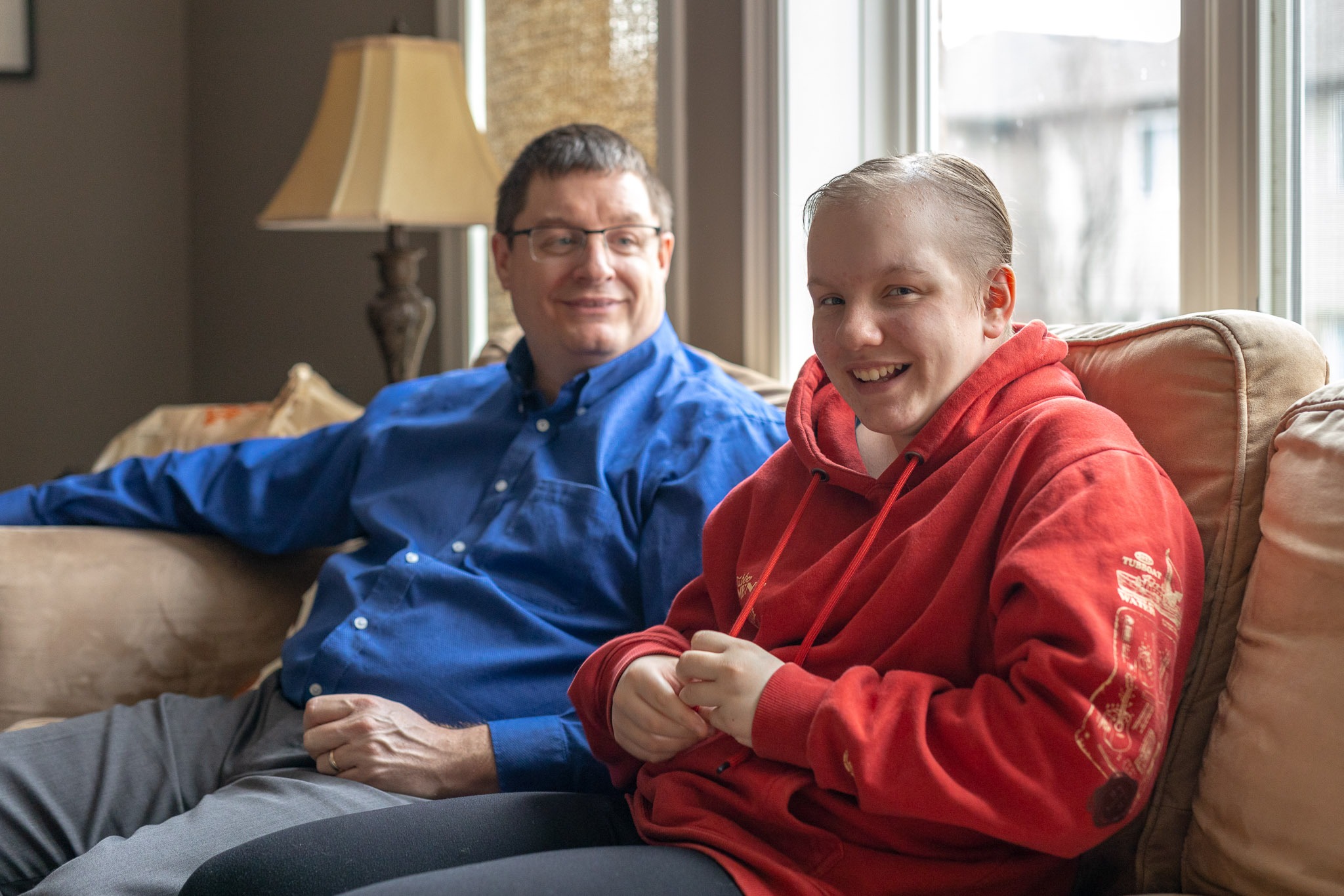 MyChart makes it easier for parents to be “partners in care.”

Keep track of your child’s health care with MyChart 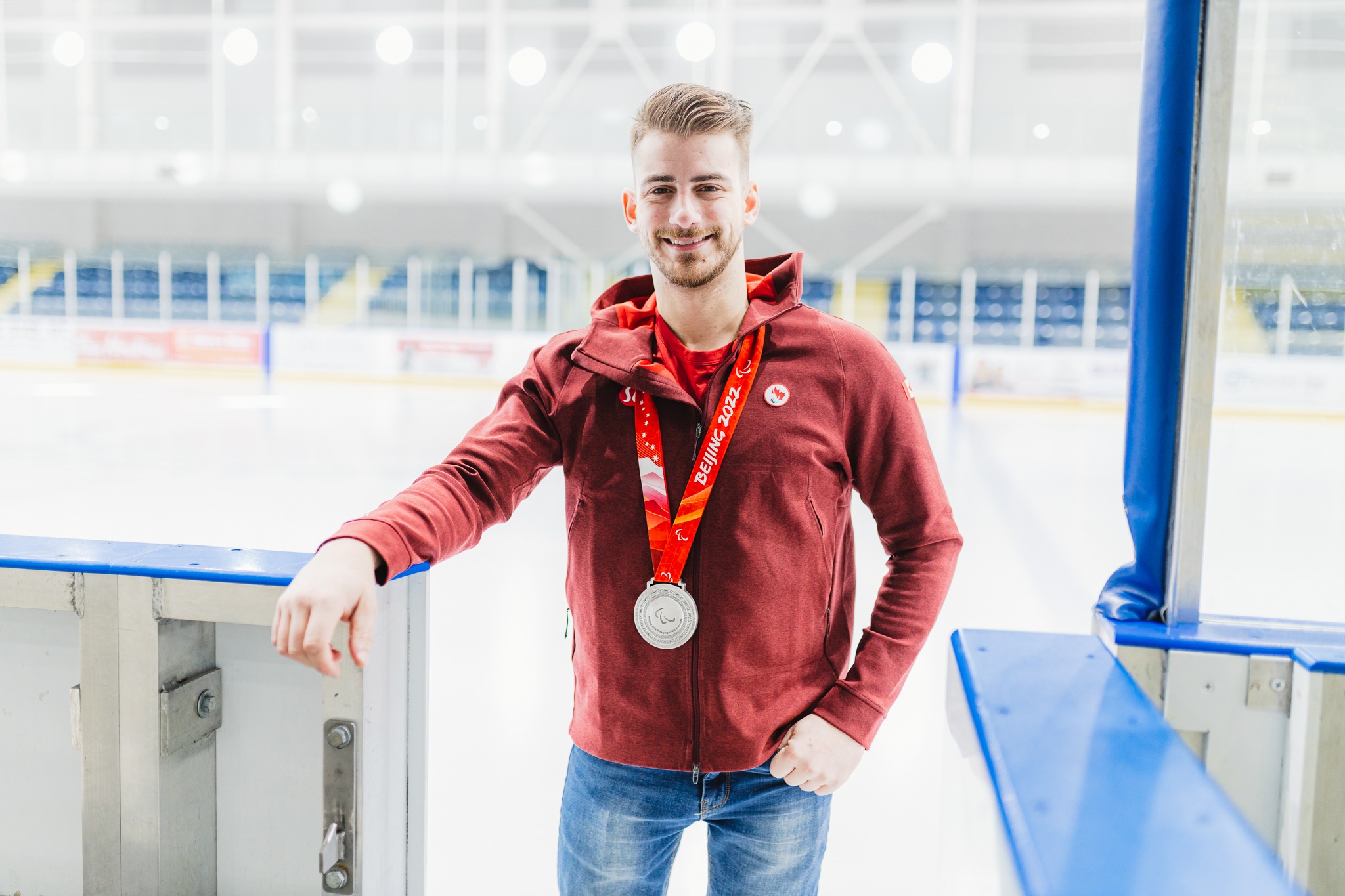 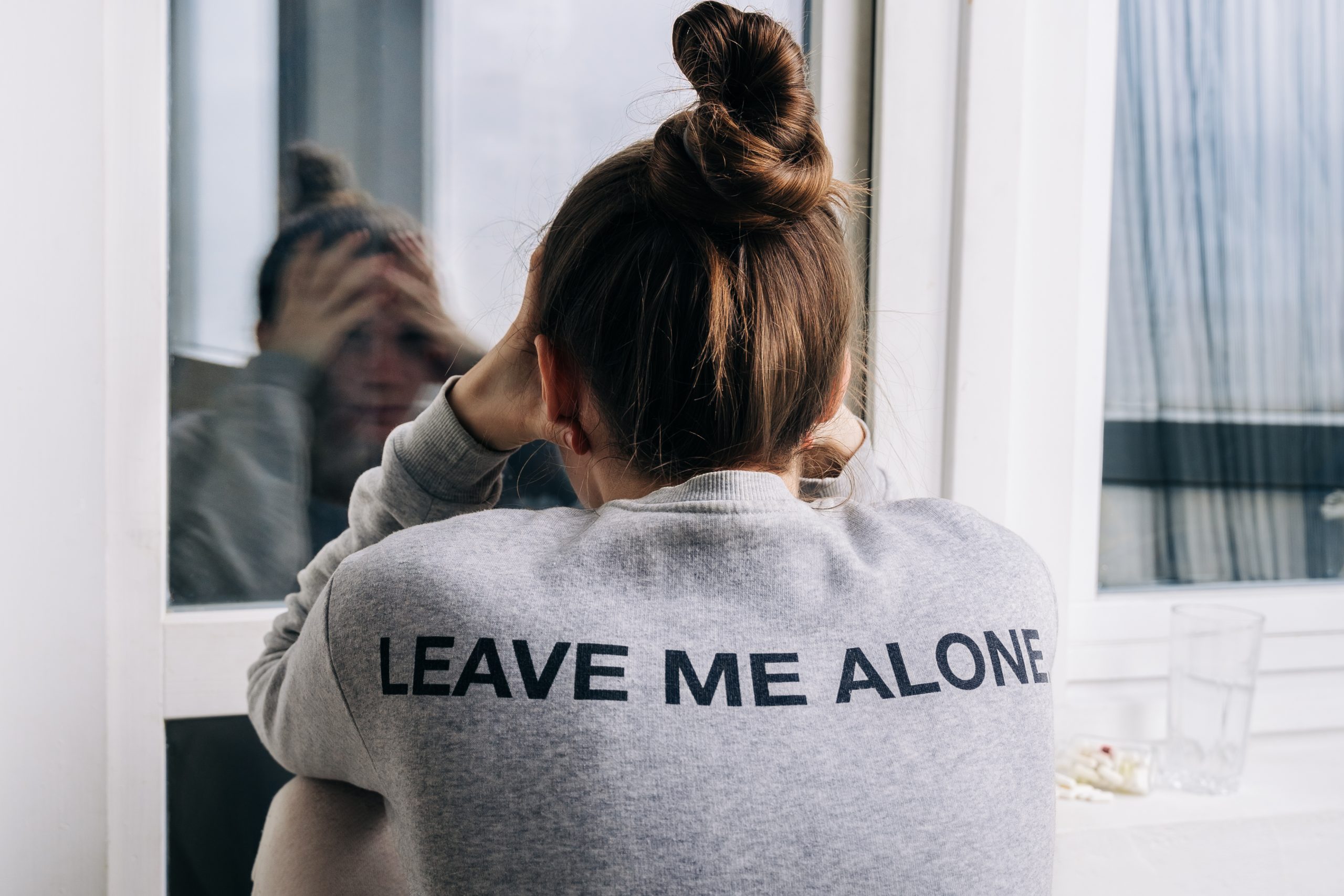 Stepping into their children’s shoes through unique mental health workshop 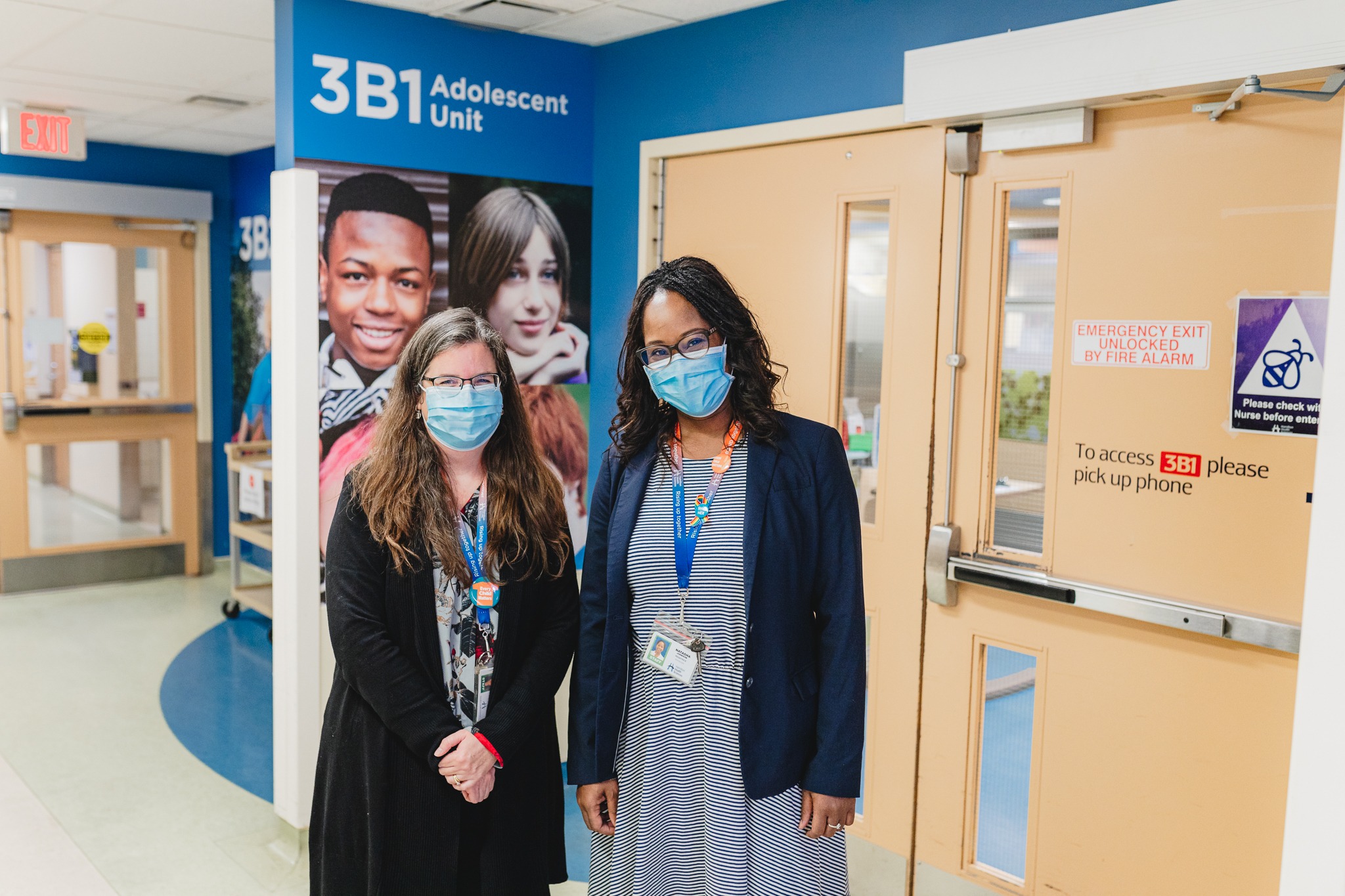