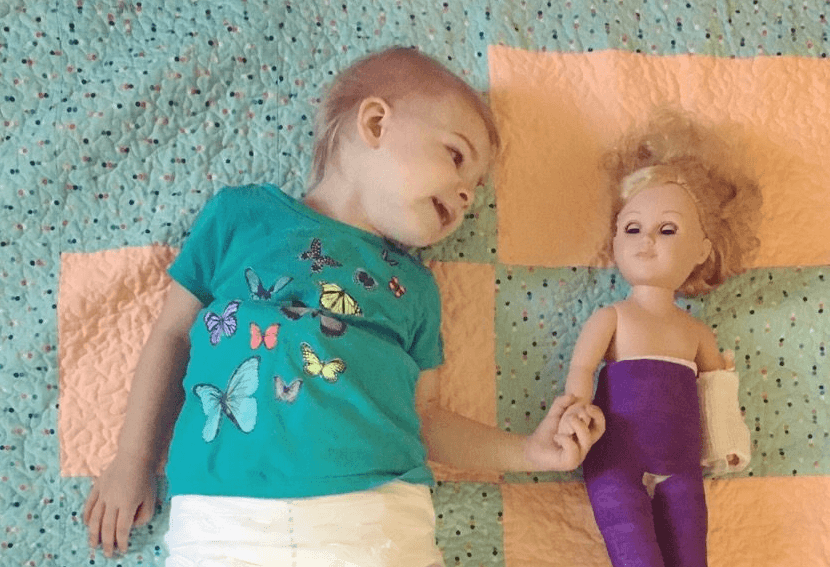 Two year old Madison has spent more time in the hospital than many people do in a lifetime. She was born with hip dysplasia, a condition where the hip joint doesn’t fit together properly, allowing it to become dislocated easily.

“When she was 14-months old and started to walk, we noticed that she walked on her tiptoe,” said her mom, Kylie. “Our doctor referred us to McMaster Children’s Hospital (MCH) and she was diagnosed with hip dysplasia on the spot.”

A severe case of hip dysplasia

Her case is severe, and she has been in treatment at MCH since her diagnosis. As her parents prepared for Madison’s second major surgery, they realized she was at a stage where she would be able to understand more of what was happening. They gave her a doll called Sally Sue, who also has hip dysplasia. The family used the doll to help explain her condition, and prepare her for what she was going to experience in surgery and recovery.

“The doll allowed her to feel not alone.”

“We would bring the doll to every X-ray and appointment,” says Kylie. “The doll allowed her to feel not alone. We wanted to do as much as we could to prepare a two and a half year old for a pretty invasive surgery.”

Surgery for Madison and Sally Sue

On the day of her surgery, Madison and Sally Sue arrived at MCH. Kylie asked Madison’s orthopaedic surgeon, Dr. Devin Peterson, if he would play along, and he gladly agreed.

“I was in the room when Madison was about to be put under anesthesia, and Dr. Peterson was so great as he prepared the team,” Kylie recalls. “He said to everyone, ‘Now we have two patients going into surgery today.’ It was pretty incredible that he took the time to say that so Maddy could hear.”

Dr. Peterson handed Sally Sue off to orthopeadic surgery resident, Dr. Austin MacDonald so he could care for the ‘second patient.’ After surgery, Madison’s entire lower body would be in a cast. The team wanted Sally Sue to match. Dr. MacDonald carefully wrapped a purple cast around the doll’s tiny legs, and delivered Sally Sue to the little girl’s room so it would be there when she woke up. 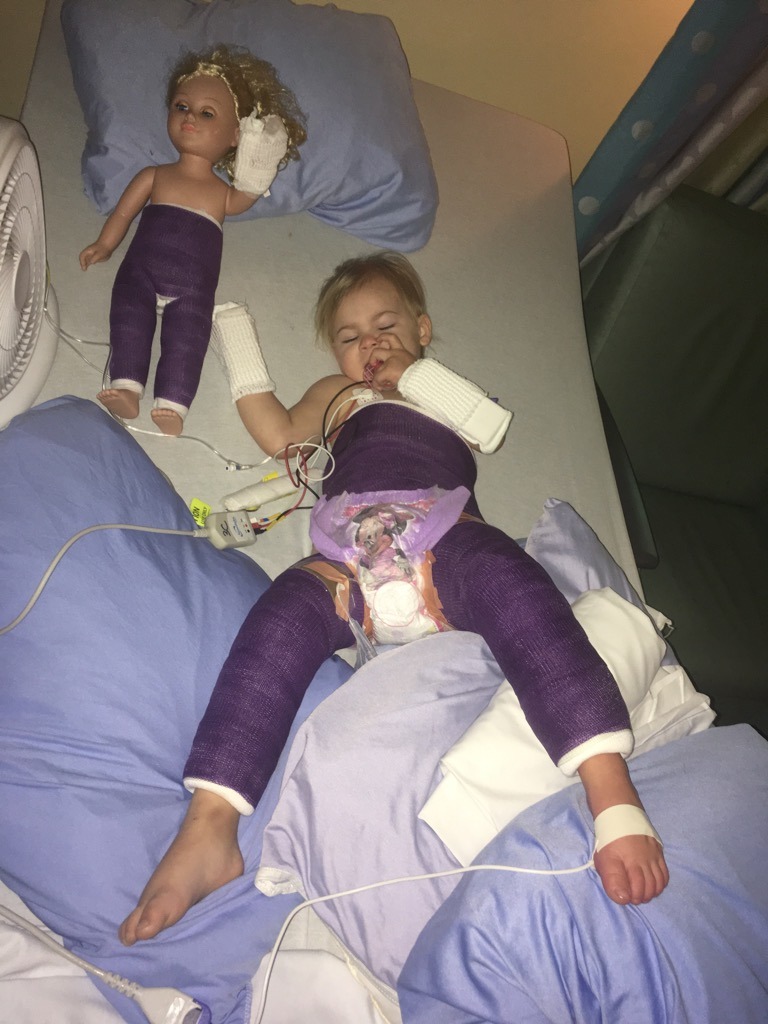 “She’s been through a lot, and I was very happy to do it,” says Dr. MacDonald. “Dr. Peterson always goes the extra mile, and I knew it would be a good tool to make Madison more comfortable with what was happening.”

The special touch of a Children’s Hospital

Working in a children’s hospital, Dr. Peterson knows what a difference small gestures can make for young patients.

“Although all hospitals wish to create a comfortable environment for patients, children’s hospitals deal with patients that are more scared and often confused with what is happening around them,” he says. “Staff at children’s hospitals must look for innovative ways to decrease a child’s anxiety. Simple things like casting a doll, making sure a cast is a particular color, or simply making sure to smile and engage directly with the child can go a long way in improving the patient experience.”

Madison’s recovery has been challenging, but her mom says she is doing well and getting used to her cast. She still has a long road ahead of her. She will need to relearn how to walk and crawl again once her casts are removed, and will eventually need a hip replacement. For now, the family is focused on helping her enjoy life as a kid; just a girl and her doll, who both happen to have hip dysplasia.