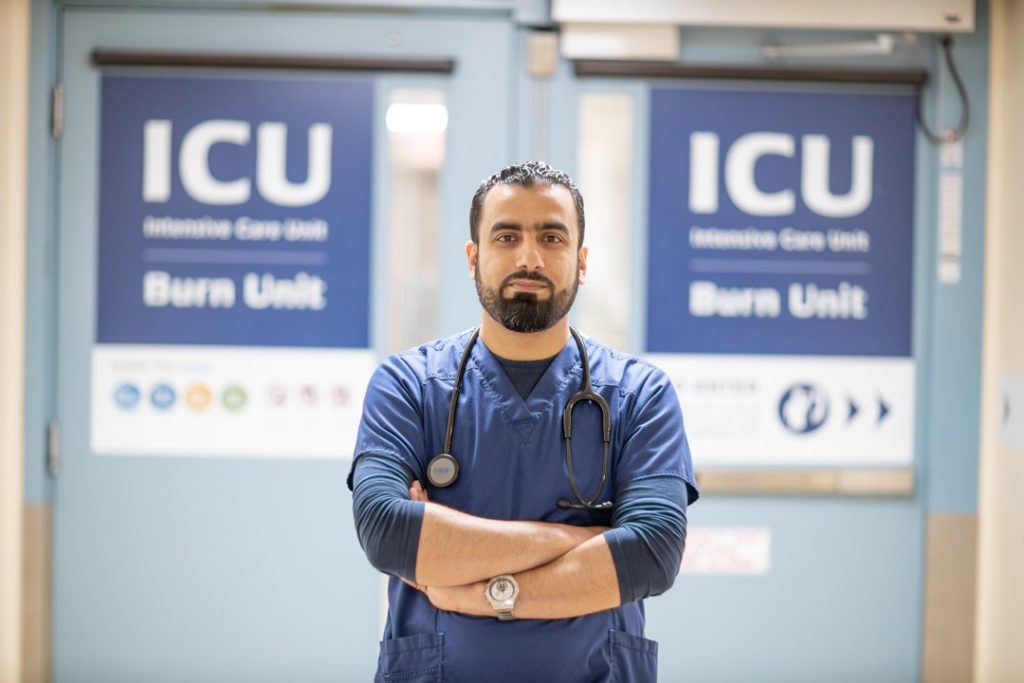 Dreams do come true. Othman Mansour’s career as a nurse started 12 years ago but what he really wanted was to provide his family with better opportunities.

Starting out in Jordan before working in Saudi Arabia, Othman wanted to continue his path onto Canada. The next steps for him posed a challenge.

“Like many in my position, I worried about getting my credentials,” says Othman. “Then I knew I had to focus on developing effective therapeutic relationships with patients and their families that foster open communication and trust.”

Othman is an internationally trained nurse working in the intensive care unit (ICU) at Hamilton Health Sciences’ (HHS) Hamilton General Hospital. He cares for patients suffering from various forms of trauma, surgery and other diagnoses that require critically trained nurses for respiratory support on ventilators.

Othman is the first to come out of the Internationally Educated Nurse program and land in the ICU. Othman is the first registered nurse to enter the IEN project and land in the hospital’s ICU.

After completing his degree, Othman worked in the surgical unit at King Abdullah University Hospital while working on his master’s degree before serving as the charge nurse for eight years.

When Othman arrived in Canada in 2017, he participated in the IEN project while waiting for his nursing license to be processed that would allow him to work here full time. He worked as a health care aide with another organization to make ends meet in the meantime.

His colleague Tami McKenzie was excited to work with Othman once he got his license. She was in charge of his training in the ICU at Hamilton General.

“Training Othman was a new experience for me,” says Tami. “He had the knowledge about critical care, but he lacked the knowledge base with respect to our equipment and IV medications.”

Othman’s many years of experience working outside Canada were beneficial to him.

After two shifts with his mentor, Ravinder Multani, it became apparent Othman needed more guidance. While very knowledgeable and an avid critical thinker, Othman found the equipment and some processes challenging. There were key differences compared to what he saw back home.

A brief introduction later and they both jumped right into IV infusions. Othman’s many years of experience working outside Canada were beneficial to him. But there were still early setbacks.

His team created a new strategy for Othman that would set him on the path to success, which he ultimately realized.

“He picked things up very fast,” says Tami proudly of her new trainee. “We had IV bags spread across the table and we systematically looked up IV monographs as we went down the line.”

“It’s hard to express how thankful and lucky I am for the IEN office and their endless support,” says Othman. “Tami and the rest of the team in the ICU were amazing throughout my long journey to this point.”

“They made my dreams come true.”

With contributions from Tami McKenzie

Is there a staff member, physician or volunteer you want to recognize for their outstanding work? Send an email to share@hhsc.ca with their name, role, site, department and why they should be recognized. We may feature them in our weekly series.

Hamilton Health Sciences | @mch_childrens - January 28
ICYMI: Yesterday was #NationalKidsandVaccinesDay and these kids celebrated by getting their shots! A big thank you… https://t.co/XS3u91IoMN

Hamilton Health Sciences | @mch_childrens - January 28
Childcare can be very beneficial for your child – but it can take some work to find the right program! That's why… https://t.co/xWKGwdWpeu
Ways to Give