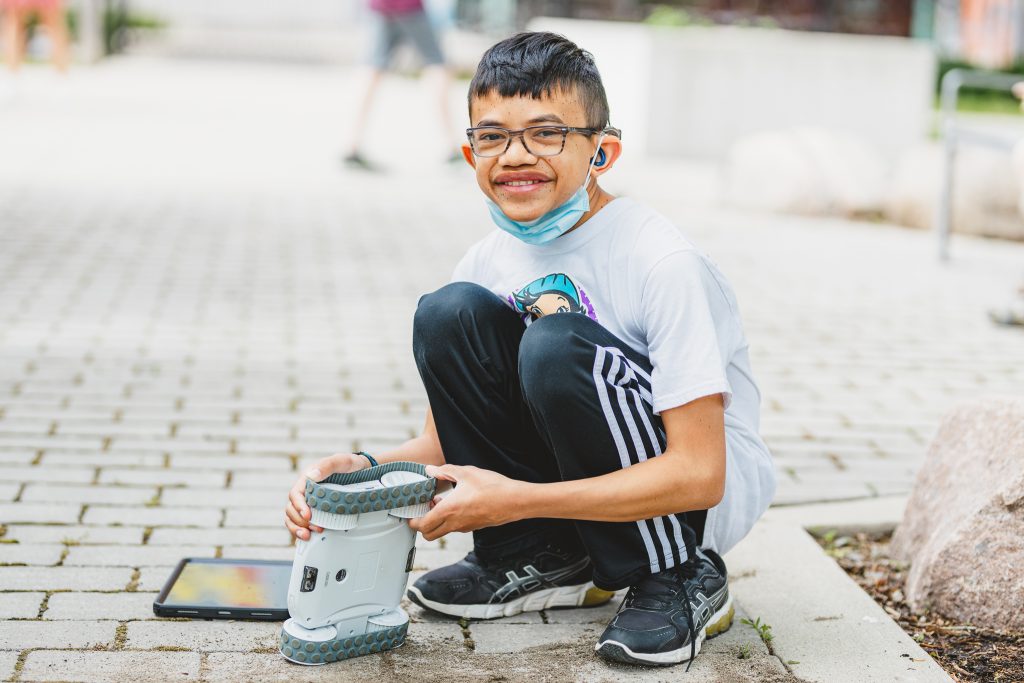 The robotic Lego car built by Mattis Santos is close to perfection.

“The only thing that would make it better are wings and a propeller so it could fly,” says Mattis, 15, who is passionate about technology and someday wants to design and build airplanes for a living.

“Mattis is very hands-on and loves to build things.” — his dad, Arsenio 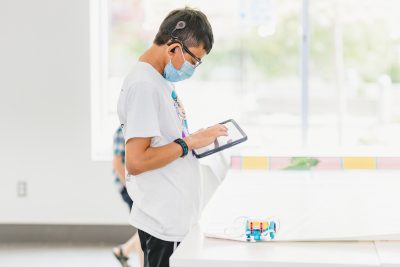 Mattis belongs to a robotics club for kids who receive care at the Hamilton Health Sciences’ Ron Joyce Children’s Health Centre (RJCHC). Located in Hamilton’s north end, the RJCHC is part of HHS McMaster Children’s Hospital, and home to a range of outpatient services focused on child rehabilitation and developmental health.

The club gives these young patients the opportunity to learn STEM (science, technology, engineering and math) skills. For the past two years, it was run virtually due to the pandemic. But in May, its half-a-dozen members started meeting in person on Saturday mornings at the RJCHC for activities including building Lego robots, operating remote control cars and drones, and playing with tech toys called Sphero robots.

Since the RJCHC has very light foot traffic on weekends, the club takes over the lobby and outdoor courtyard. They also hope to use a blocked-off area of the parking lot during the summer.

“Mattis is very hands-on and loves to build things,” says his dad, Arsenio Santos. “The club gives like-minded kids an opportunity to make friends through their shared interest in technology. What’s being introduced through play is helping these kids build skills that could lead to a career.”

For example, club members currently use toy drones that can be flown without a licence. But Mike Berube, a parent who volunteers as the club’s technical lead, envisions a day when they can learn to use commercial drones and earn their drone licence. 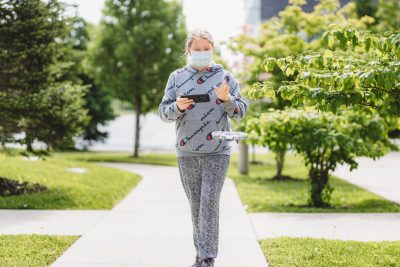 Madison enjoys flying a drone in the courtyard of the RJCHC.

“This could open the door to operating drones as a career,” says Berube, a robotics expert whose daughter Petra, 8, is a patient at RJCHC. Commercial drone flying would happen at a different location so as not to interfere with the nearby helipad at HHS Hamilton General Hospital.

Berube got involved in the club through his daughter, and runs the club in partnership with RJCHC hospital therapeutic recreation staff. The Berube family also donated several of the club’s toys.

“Our daughter gets a lot of resources from the hospital so it’s our way of giving back,” says Berube.

A place to belong

Madison Ferrell, 12, joined at her mom’s suggestion. “I love it,” says Madison, taking a break from driving a wheeled Sphero robotic toy using a tablet computer. “I can be myself here. Everyone is the same as me because we all like technology, and I can do the things here that I’m good at.”

Madison wants to someday work in the computer science field. “Taking part in this club is helping me get ready for that. Plus it’s really, really fun.” 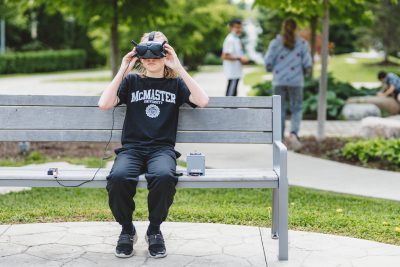 Billy tries out of virtual reality goggles at the RJCHC robotics club.

Billy Ferguson 13, spent the morning driving a remote control car. His mom Debbie Ferguson had high praise for the club.  “I can’t say enough good things about the people who run this program,” she says. “Billy loves technology, especially coding. I’m really glad that he has this opportunity to explore his interests here.”

“It will be great to meet other kids with the same interests.” — Rowan

Rowan Rader, 12, was the club’s very first member. He hasn’t attended in person yet, but has met with Berube virtually for the past two years to practise coding.

Coding is the process of taking instructions that humans can read, and translating them into something the computer can understand.

Berube gave Rowan projects to work on at home, including a coding assignment that helped a high school student in another province take part in his school’s robotics class. The student used a motorized wheelchair and only had control of his head, so he couldn’t operate a hand-held remote control unit. Using coding, Berube and Rowan are creating a system where the student could use his head to send a signal from his chair to robotic toys, allowing him to participate in his high school club.

“It’s wonderful to see these kids come into their own and make new friends.” — Tanisha McDermott, HHS recreation therapist 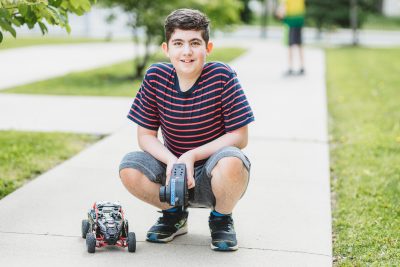 “I just love coding,” says Rowan, who was proud to help find a solution for this teen. Rowan is looking forward to attending the robotics club in person, and meeting fellow tech enthusiasts his age. “It will be great to meet other kids with the same interests.”

Tanisha McDermott, a recreation therapist at RJCHC, is one of the club’s leaders. “It’s wonderful to see these kids come into their own and make new friends,” she says. “These activities really help to build their confidence, and technology is a common interest that they can connect through, even at their different ages.”

Ayden Filippetto, 10, smiled non-stop as he maneuvered a toy car around the lobby and courtyard using a tablet. “I love the way they respond to the remote. They’re easy to drive and really fun.” 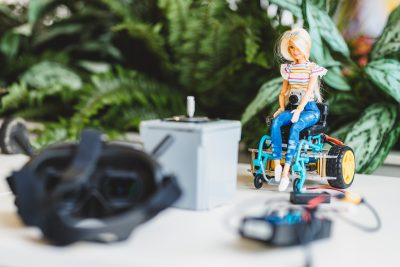 The club’s toys include a remote control car that was adapted to function as a motorized wheelchair for a Barbie doll.

Berube adapted one of the club’s remote control cars to function as a motorized wheelchair for a Barbie doll. This toy helps kids with limited mobility learn to maneuver their own motorized chairs. A custom wireless joystick was added along with a camera to simulate sitting in the chair.

“In this way, kids get a real-life feel for what it’s like to maneuver a motorized chair in a safe environment through the use of virtual reality goggles,” says Berube.

The robotics club will continue meeting in person over summer, likely on a weeknight, and is ideal for patients aged nine to 15.

Meet the parent volunteer who made this club possible: Story 1

Two-part series: Meet parent volunteer Mike Berube, who was inspired by his daughter to lead a robotics club for young HHS outpatients. 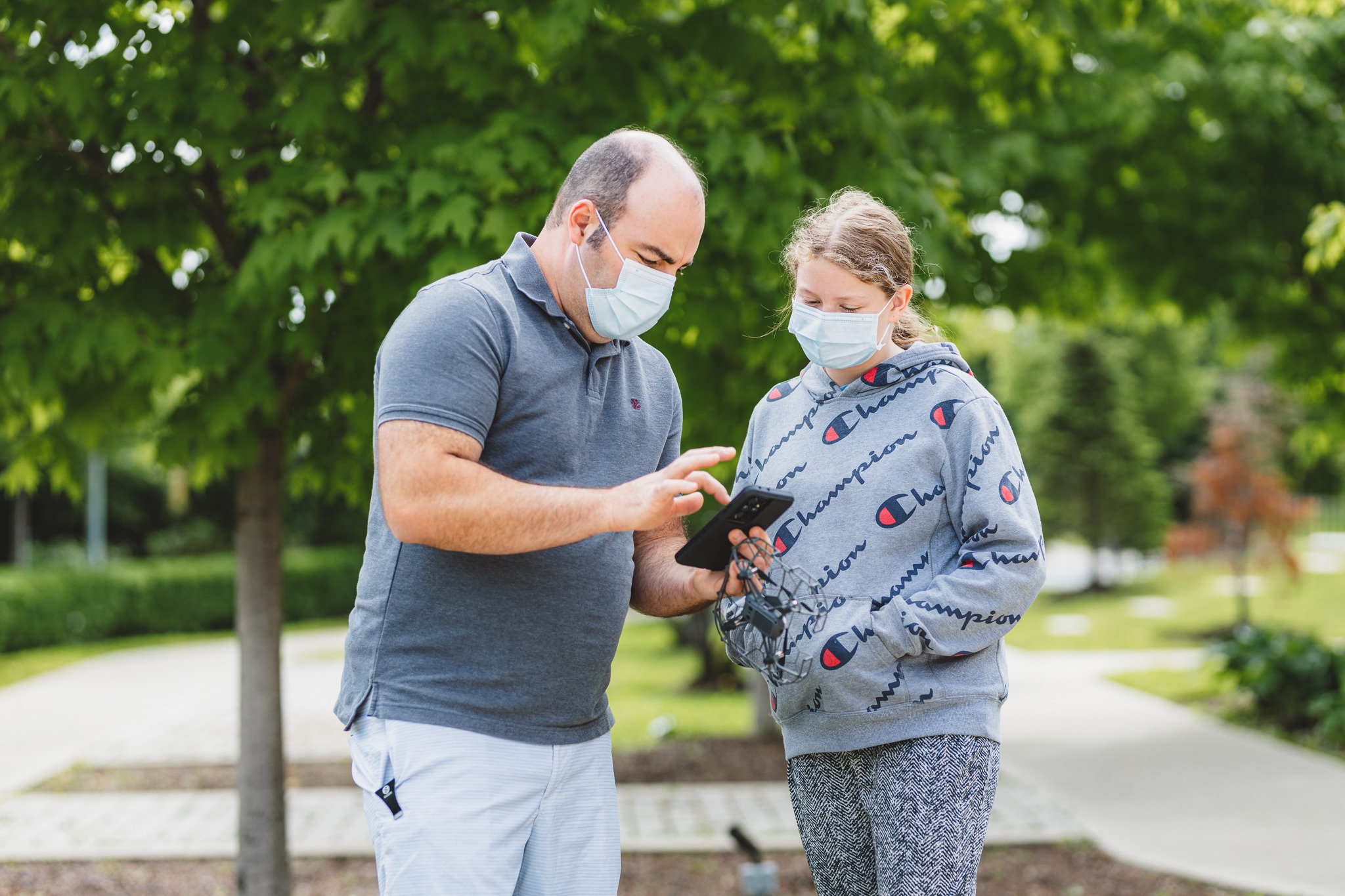 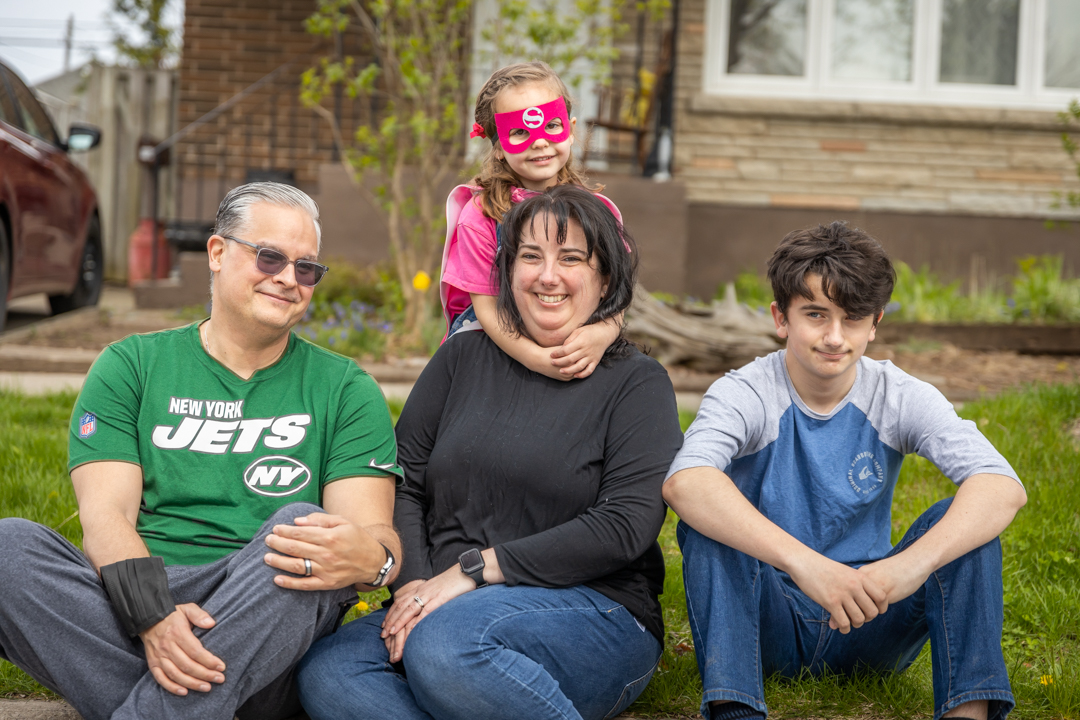 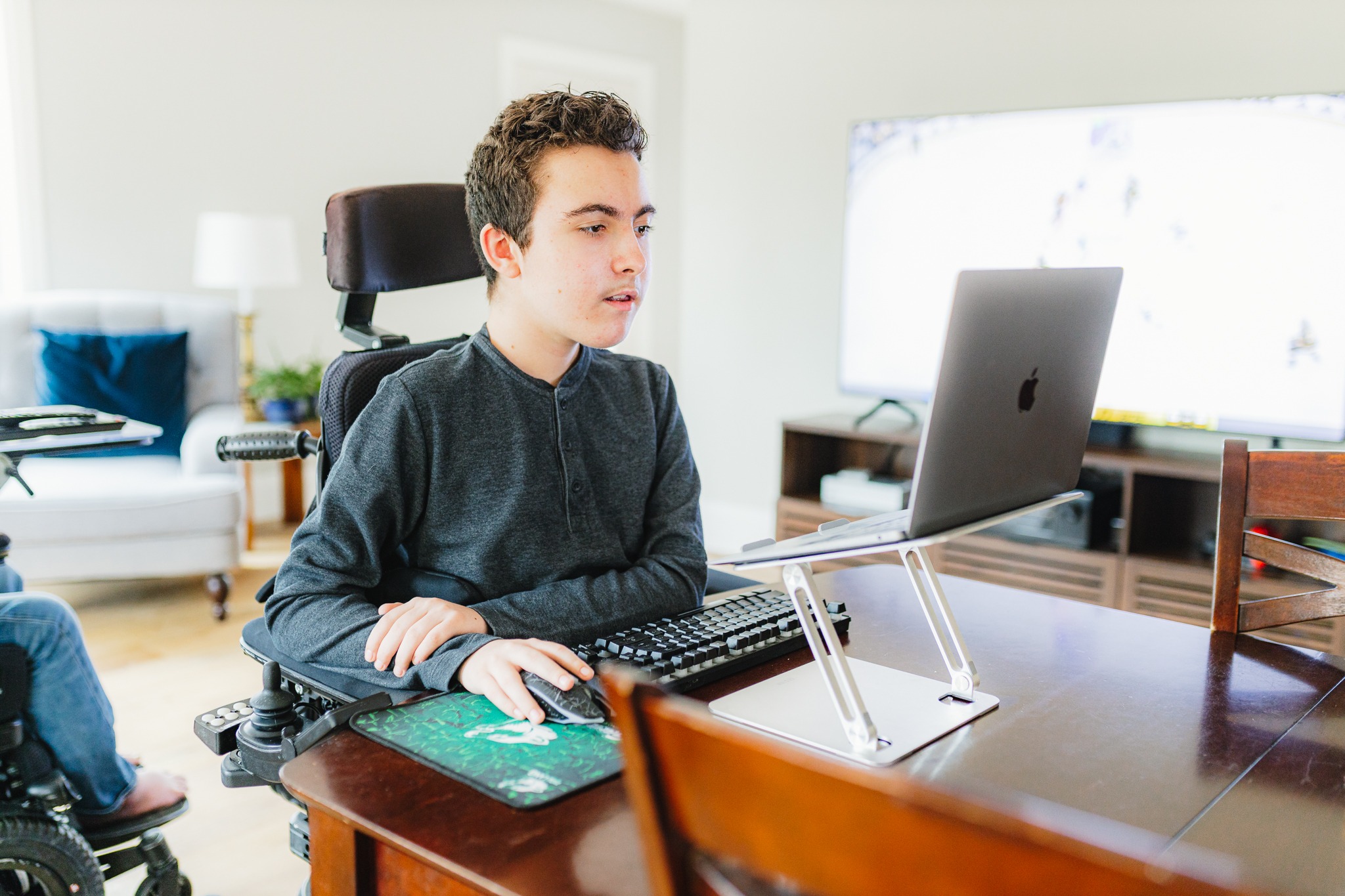