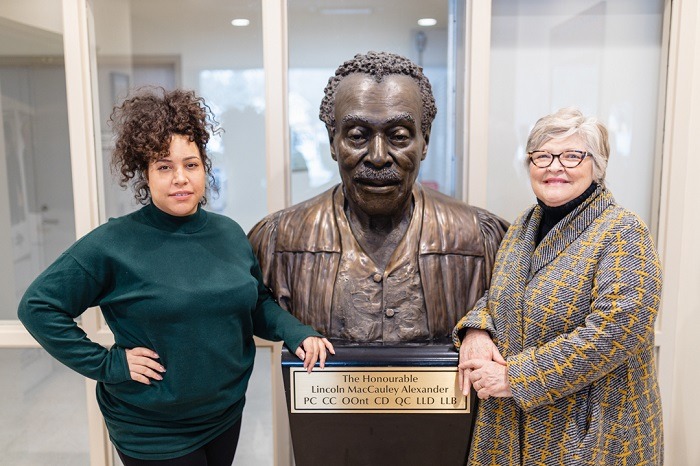 A bronze sculpture cast of a person affectionately known as one of this city’s most well-loved citizens greets visitors inside St. Peter’s Hospital (SPH). The person immortalized is the Honourable Lincoln Alexander (1922 – 2012), a local lawyer who became the first black member of the House of Commons and first black Lieutenant Governor of Ontario (1985 – 1991).

Many people may not know that SPH is home to the sculpture cast – one of ten created in 2007 by local sculptor, Gino Cavicchioli (the original sculpture sits in the Art Gallery of Hamilton) – or that an outdoor pavilion on the hospital grounds was named in honour of Lincoln and his late wife, Yvonne, in 2009.

“It’s heartwarming and humbling that people keep his memory alive like this,” says granddaughter, Erika Alexander. “It demonstrates what he meant to the community.”

Erika and her mother Joyce, Lincoln’s daughter-in-law, reminisced about Lincoln’s life when they stopped by SPH recently to have a photo taken with bronze cast for Black History Month.

“He was a proud Canadian and a committed public servant who worked to improve the lives of many,” says Joyce, a registered nurse at HHS.

The health of his fellow Canadians and the future of HHS were areas of focus for him. So were youth and education. Lincoln lived at SPH for the last three months of his life. He also received care at the Hamilton General Hospital.

Joyce says it’s fitting that the bronze casts of her late father-in-law are found in many public spaces. “It recognizes that Lincoln was an all peoples person. To him, everyone was equal, regardless of his or her position or status, or where they lived.”

Erika says it is important to build an understanding the things that are in front of us daily, not only during Black History Month.

“Celebrate the history, yes, but recognize where we are now and where we will go in the future,” she says. “One way we can all do that is by looking at these things for what they really are. They are part of world history, and part of our day to day lives.”