Andrew Beauchamp-Alphonse and his mom, Lynda, are grateful for the support they’ve received from McMaster Children’s Hospital’s Cystic Fibrosis Clinic. One in every 3,600 children born in Canada has CF.
Stories

“Nothing in life is off-limits” for children with cystic fibrosis

Before their oldest daughter Mikayla was born, Tammy Strong and her husband Darrin Bianchin had no idea they were carriers of the cystic fibrosis (CF) gene. They also didn’t know what life would look like raising two daughters with the disease – Mikayla’s younger sister Madison, born two years later, would also be diagnosed with CF at birth.

CF is the most common fatal genetic disease affecting Canadian children and young adults. It causes damage to the lungs, digestive system, and other organs. Experts estimate one in every 3,600 children born in Canada has CF.

Mikayla and Madison on growing up with cystic fibrosis 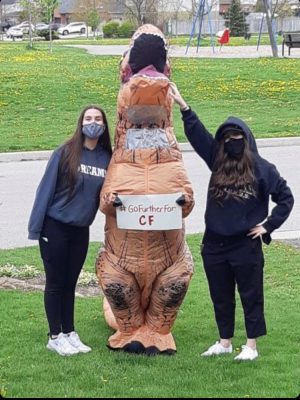 Mikayla and Madison with mom Tammy, who dressed up as a dinosaur to help raise funds during CF Awareness Month.

Mikayla, 20, and Madison, 18, say that growing up with the disease was “pretty normal.”

“We didn’t know anything different, and we did all of our treatments and clinic visits together,” says Madison, referring to the CF Clinic at McMaster Children’s Hospital (MCH), where the sisters were patients until they turned eighteen.

They spent so much time there that the clinic staff felt like an extended part of their family. “They made going to the hospital a good experience for us as children,” says Mikayla, who credits the staff with helping her and Madison feel comfortable sharing their story and advocating for the CF community.

The clinic played an important part in making the sisters feel like they could live a “normal” life with CF. They recall working with clinic staff so they could participate in a mission trip to a country without reliable access to electricity, which is needed for some CF treatments. Clinic staff also helped Madison optimize her performance as a competitive swimmer, helping her time her treatments on swim meet days so that she could do her best.

“They helped me realize that nothing in life is off-limits just because I have CF,” says Madison. “I don’t feel weighed down by my disease because they helped me learn how to adjust my CF routine to fit the life I want.” 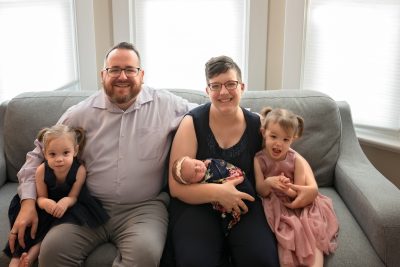 The Weil family at home.

Emme and Erin Weil are three-year-old fraternal twins, and only Emme has a CF diagnosis.

The girls’ mother, Danielle Weil, says finding out that Emme had CF was a complete shock.

“We had no indication through the pregnancy, no family history. My husband and I had heard about CF, but we had no idea we were carriers,” she says.

Emme was diagnosed through the newborn screening program at another local hospital where the twins were born. The hospital took a small blood sample from each twin and screened it for more than twenty-five rare diseases and conditions that might not otherwise be caught at birth. Emme was in the neonatal intensive care unit with a bowel blockage, which caused her medical team to suspect she had CF, and the screening confirmed it.

Weil says the team at the MCH CF clinic has been an unbelievable source of support for the family. “They were in the picture almost right from the very beginning. They’re always available to support us and answer our questions – even if they’re not CF related.”

In addition to volunteering with the Hamilton chapter of CF Canada, including sitting on the planning committee for the Walk to Make CF History, Weil has also found support online. “This is going to be a very lonely disease for Emme,” she says, since people with CF can’t be in close contact with other people with the disease due to the risk of exchanging deadly bacteria. “Looking ahead, I’m grateful for social media and video calls, because they will help Emme connect to other people she can relate to. It’s really comforting having a community where everybody knows exactly what you’re going through.”

Lynda and Andrew Beauchamp on the importance of community support 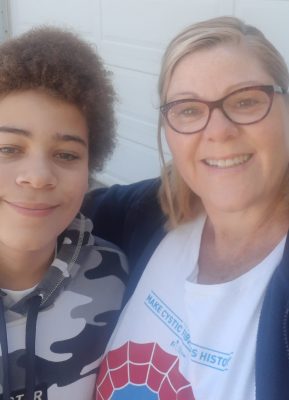 Andrew Beauchamp-Alphonse’s mom, Lynda Beauchamp, suspected something was wrong with his digestion from infancy, but it wasn’t until Andrew underwent a sweat test at age six  that doctors told her he had CF. Like the Bianchins and Weils, Beauchamp and her partner had no idea they were carriers of the CF gene. “I was shell-shocked. It was heavy news to get as a parent,” she says, adding that reading about the disease online was disheartening.

Andrew’s diagnosis date coincided with the Walk to Make CF History, an event he and his mom have participated in every year since. Beauchamp, who volunteers with the Hamilton chapter of CF Canada, says finding the organization has helped her and Andrew feel less alone, and encourages families who are new to CF to find their local chapter as soon as possible. “Finding other people who understand what you’re going through is so important.”

For Andrew, having a great group of friends has made a huge difference. CF patients can spend a lot of time at the clinic and doing treatments at home. Andrew is grateful for friends who understand and support him through all of that. They also joined him on the Walk to Make CF History in the years before the pandemic.

“They’re good friends and they support me with everything,” says Andrew. “I really want them to know that they’re the best!”

How you can help

When asked what people outside of the CF community can do to support people with the disease, all three families interviewed for this story responded the same way: donations to fund research and treatments can make the biggest difference.

“The life expectancy for someone with CF when Mikayla and Madison were born was 30. Now it’s 54,” says Strong. “Money buys research, care and time.”

CF primarily affects the lungs and digestive system. Due to a genetic mutation, the cystic fibrosis transmembrane conductance regulator (CFTR) protein is not made correctly or not made at all. This results in chloride – a component of salt – getting trapped and creating a thick, sticky mucus over the cells, causing many of the symptoms. These include very salty skin, persistent lung infections, wheezing and shortness of breath, poor weight gain despite adequate nutrition, and frequent, greasy stools and/or bulky bowel movements.

Treatment regularly includes nebulized therapies and routine physiotherapy along with pancreatic enzymes and vitamins. Antibiotics, mucus thinning medications and sinus therapies are also a part of regular treatments. Recurrent cycles of infection and inflammation of the lungs lead to chronic scarring, airway obstruction, bronchiectasis and ultimately respiratory failure. At the present time, there is no cure.

CFTR gene modulators are the latest treatment breakthrough – a revolutionary medical development that can help people with CF live longer, healthier lives. CF patients are awaiting the advent of these new treatments to be accessible and available in Canada.

“We’ve seen first-hand what fundraised dollars actually do, and we’re sitting at the most exciting time in CF research history,” says Weil, referring to the discovery and advancement of CFTR modulators.

May is Cystic Fibrosis Awareness Month. Show your support for children, youth and families impacted by CF by donating to the Hamilton Health Sciences Foundation and designating your donation to the MCH CF Clinic. 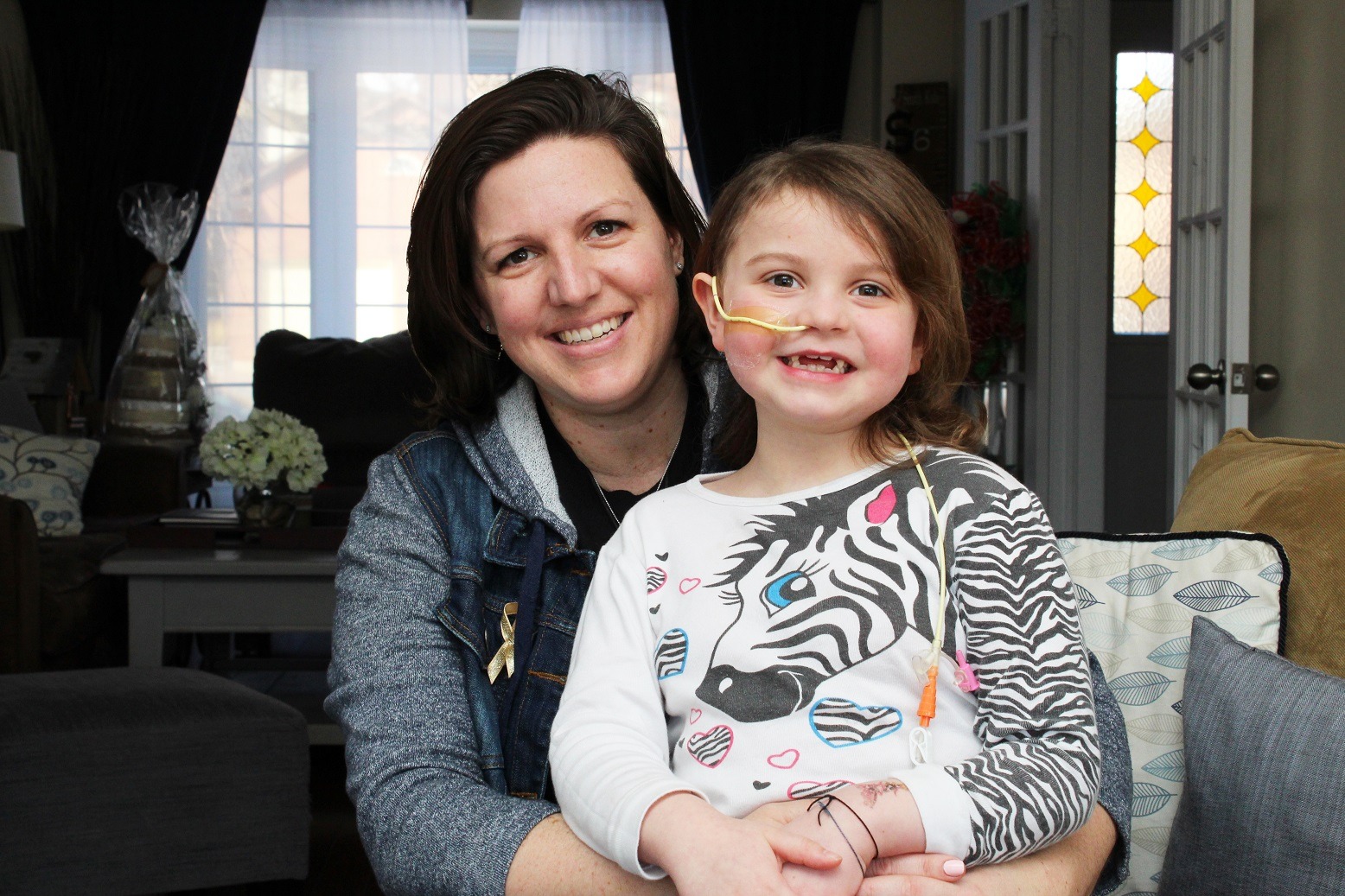 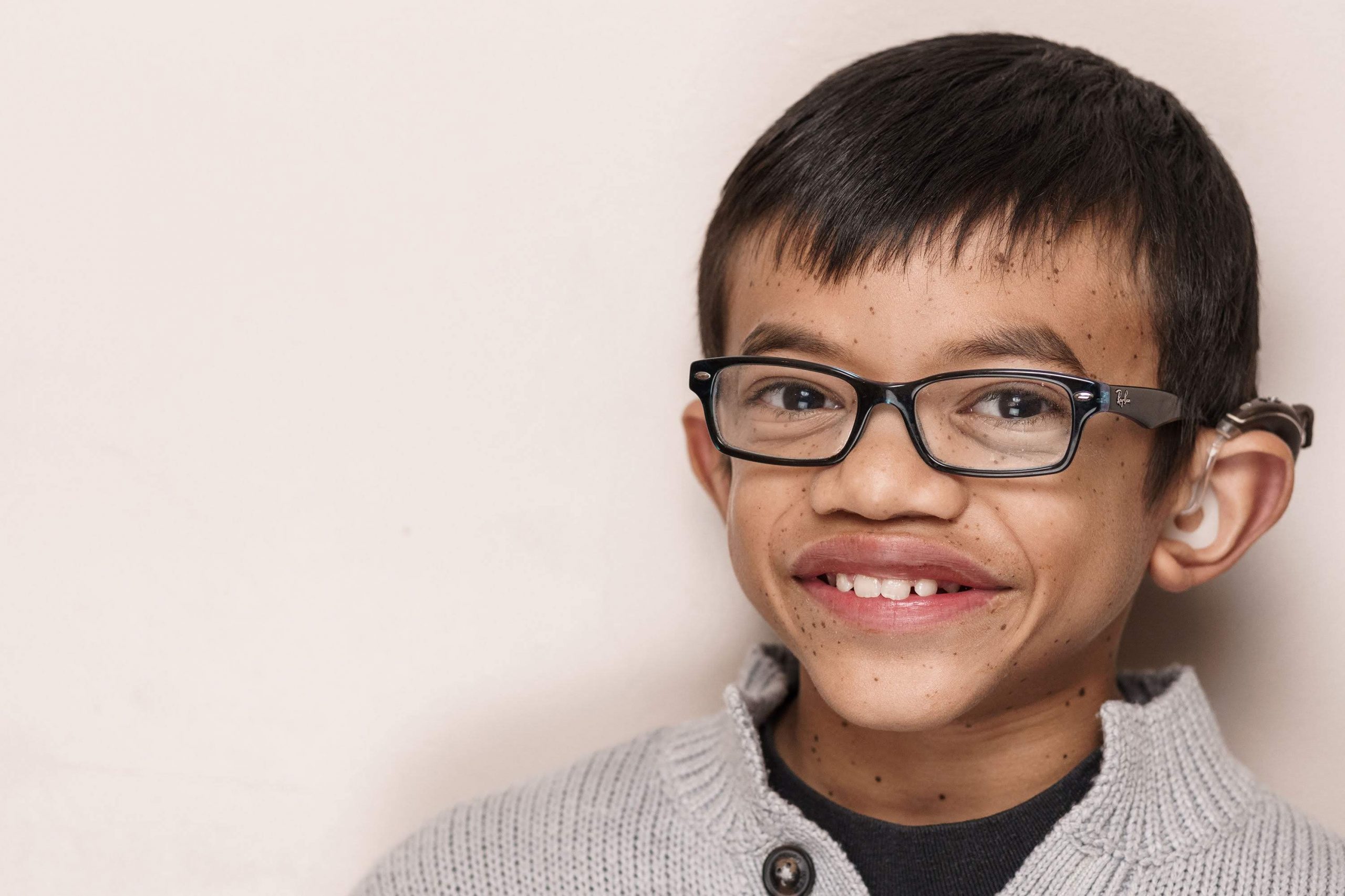 Learning and living with autism

Hamilton Health Sciences | @HamHealthSci - January 29
If your COVID-like symptoms are getting worse or you’re high risk, call your family doctor or schedule a virtual ur… twitter.com/i/web/status/1…

Hamilton Health Sciences | @mch_childrens - January 28
ICYMI: Yesterday was #NationalKidsandVaccinesDay and these kids celebrated by getting their shots! A big thank you… https://t.co/XS3u91IoMN
Ways to Give