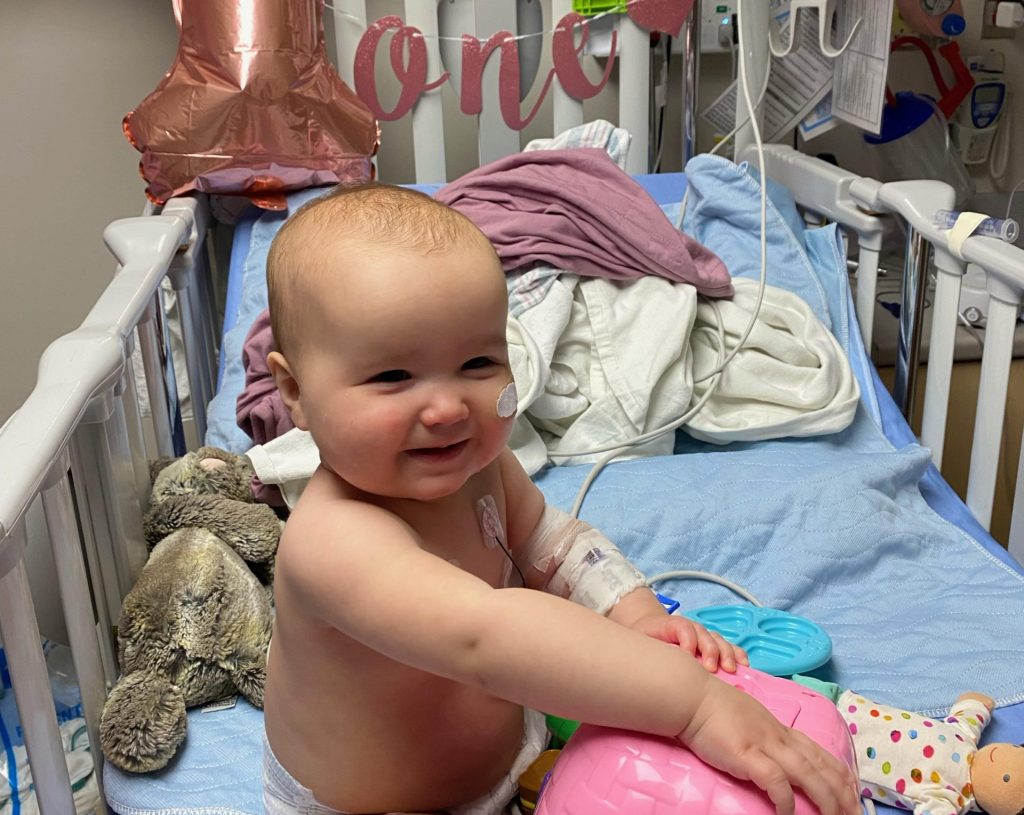 Kennedy Spicer’s family was looking forward to celebrating her first birthday on November 26. But instead of waking up in her own bed on her big day, Kennedy awoke in her hospital bed at Hamilton Health Sciences’ (HHS) McMaster Children’s Hospital (MCH), where she was being treated for pneumonia.

MCH, like all pediatric hospitals in Ontario, is under immense strain with a surge in viral illnesses causing overcrowding. The hospital is dealing with unprecedented volumes of kids needing care. Staff and spaces are under extreme pressure from a crisis that has been building over years and is coming to a head with this season’s flu, COVID and RSV infections, which can lead to more serious illnesses for our youngest patients.

But even when faced with these pressures, MCH staff, physicians and team members are working hard to give patients and families the best hospital experience possible. 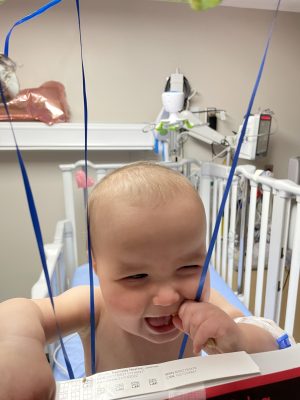 All smiles for this tough little patient.

On November 21, just days before her first birthday, Kennedy started to feel ill. “Like any parent during these times, we were really hoping to avoid a trip to the emergency department, and only wanted to go if it was absolutely necessary,” says Zac, Kennedy’s dad. “It was the last place we wanted to be.”

The couple’s three-year-old son, Jacob, had been fighting off a cold brought home from pre-school that quickly spread to his baby sister. Kennedy’s symptoms included sleeping a lot more than usual and vomiting. She also started to struggle with breathing.

After speaking with their family doctor, her parents were advised to go to emergency at MCH.

Kennedy was admitted to the pediatric intensive care unit (PICU) after a chest x-ray showed she had pneumonia.

“Right now, almost all of our patients here in the PICU are sick with a respiratory illness and on a mechanical ventilator,” says Ruth Le, an MCH PICU registered nurse.

“I recall the first night caring for Kennedy,” says Ruth Le, one of her PICU registered nurses. “Despite how sick she was, she was also very strong. So strong, in fact, that we had to bundle her arms tight with a blanket like a burrito all night so she wouldn’t pull out all her IV tubing and respiratory mask that were giving her therapy and treatment.”

“Pneumonia can be caused by a virus or bacteria,” says Le. “It starts off as a cold or flu, causing excess buildup of mucous. And if severe enough, this gives an opportunity for bacteria to infect deep into the lungs causing pneumonia. Right now, almost all of our patients here in the PICU are sick with a respiratory illness and on a mechanical ventilator.”

“There were a ton of kids. Between getting triaged, getting Tylenol, and waiting for a bed, it just kept getting busier,” says Zac.

The family noticed how busy the emergency department staff were. “You can tell they’re dealing with a lot,” says Zac.

Kennedy’s mother Sarah adds, “We expected a long wait given the current state of the hospital, but the staff were very caring and concerned, letting us know how they were going to work with Kennedy, and us.”

Kennedy was admitted, and the couple took turns staying at hospital with her.

A respiratory therapist worked with Kennedy in the PICU, where she spent majority of her time. Once Kennedy was stabilized, she was moved to a ward room in order to free up a bed for the hospital’s sickest patients.

“It was pretty packed in the hospital,” says Zac. “There were a ton of kids. Between getting triaged, getting Tylenol, and waiting for a bed, it just kept getting busier. We knew Kennedy was feeling better, and wanted to help other families get space for their kids too by freeing up her PICU bed.”

Bringing the party to the patient 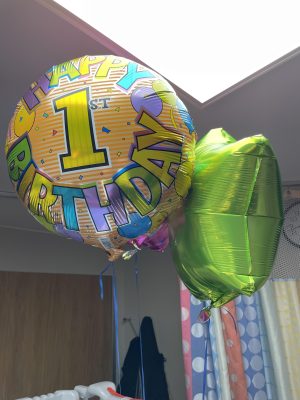 Despite the extremely high volume of patients at MCH in recent weeks, Kennedy’s health-care team wanted to make her day extra special. So they decided to bring the birthday celebration to her hospital room.

“Kennedy had been quite agitated when awake, so I made sure our child life department was involved early to help bring some sense of normalcy and age-appropriate activities when she was well enough,” says Maia Korakianitis, an MCH PICU registered nurse.

Kennedy’s family was deeply moved by how the team celebrated their daughter.

“We were so surprised and touched that they went the extra mile for Kennedy,” says Sarah, adding that Erinn Pinard, child life specialist,  arrived with a banner, two bags of presents, and balloons the morning of Kennedy’s birthday.

“Erinn even thought of our son and got him a balloon to take home,” says Sarah. “You wouldn’t think the team would be able to do anything like that, especially now with all the hospital pressures. We really appreciated it.”

“Gifts are provided to help give a sense of normalcy,” says Pinard.

Pinard is a child life specialist in the PICU at MCH. “Part of the role of a child life specialist is to honor and celebrate important milestones such as birthdays, end of treatment or an extensive admission that happened while in hospital,” she says. “Gifts are provided to help give a sense of normalcy, relieve stress for the families and provide a distraction from being in hospital during these important milestones. These gifts are made possible by generous donations from members of our community.”

Going home after a week of treatment 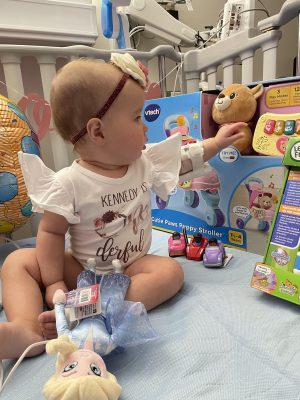 Kennedy Spicer celebrated her first birthday in the hospital while recovering from pneumonia.

Kennedy was discharged from hospital later in the day on her birthday, returning home for a belated celebration with her family.

“It was lovely to see that Kennedy was able to sit up and play on her birthday after having such a long week in the PICU,” says Pinard. “She had opened a new picnic set from her parents and was smiling and playful. The decorations also provided a fun and welcoming environment for when her big brother joined in on the celebrations.”

Kennedy’s now feeling much better, and the family expressed their gratitude to MCH, thanking them for all her care.

“You hear stories about emergency departments and pressures on the health-care system,” says Zac.  “There are a lot of skilled and talented professionals who care as much as you do about getting the best care. MCH is a community that you’re a part of, with the same goal that everyone is working towards – leaving with a healthy child.” 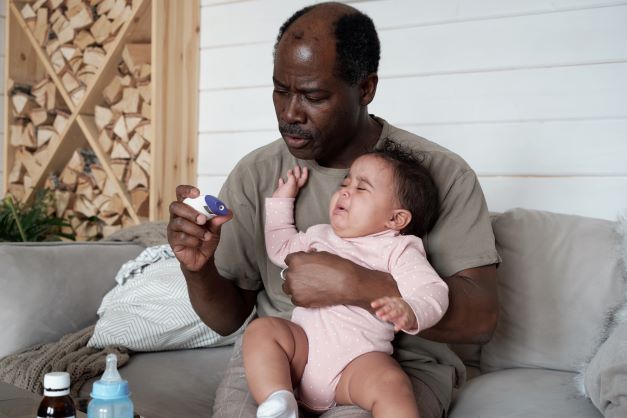 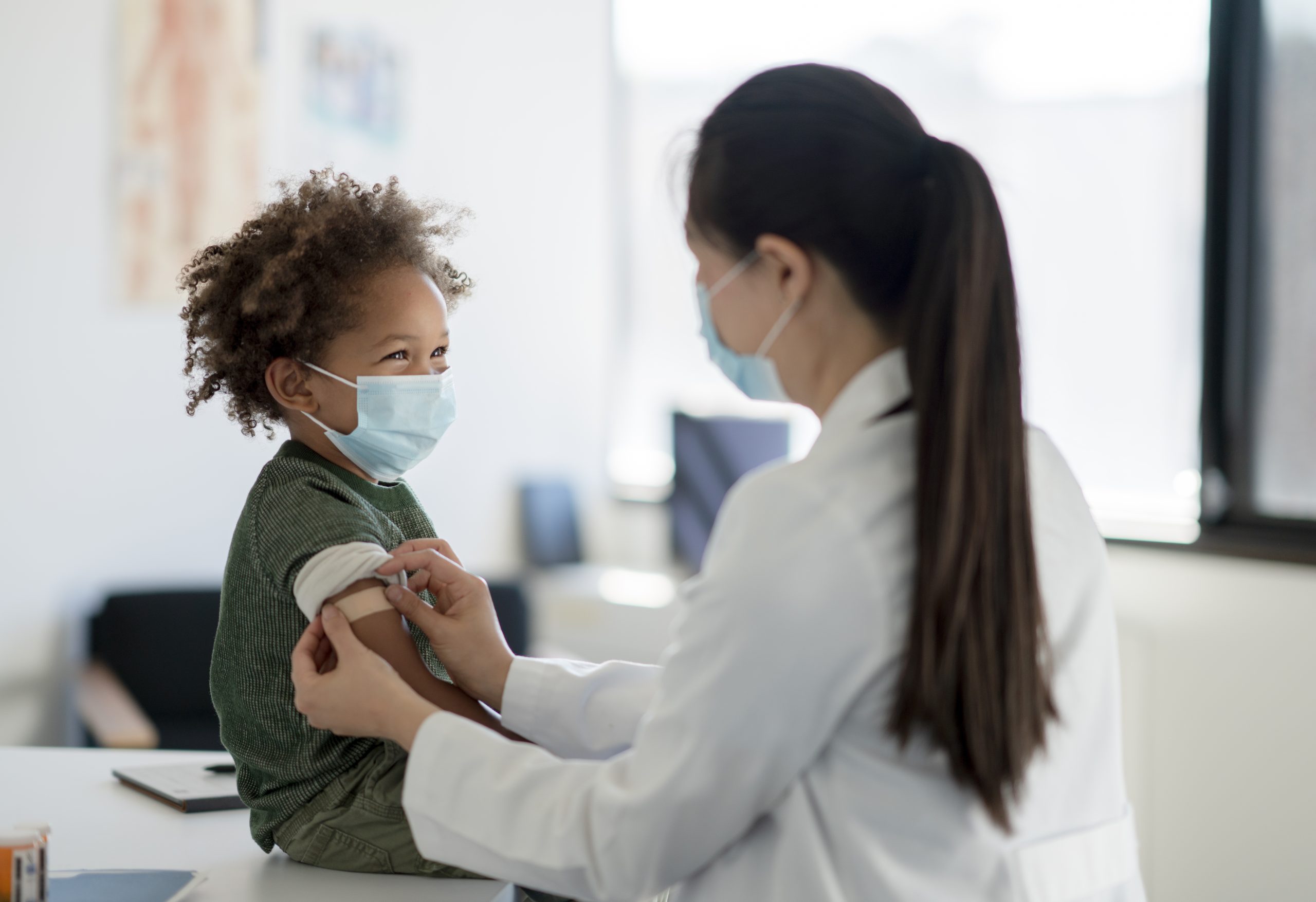