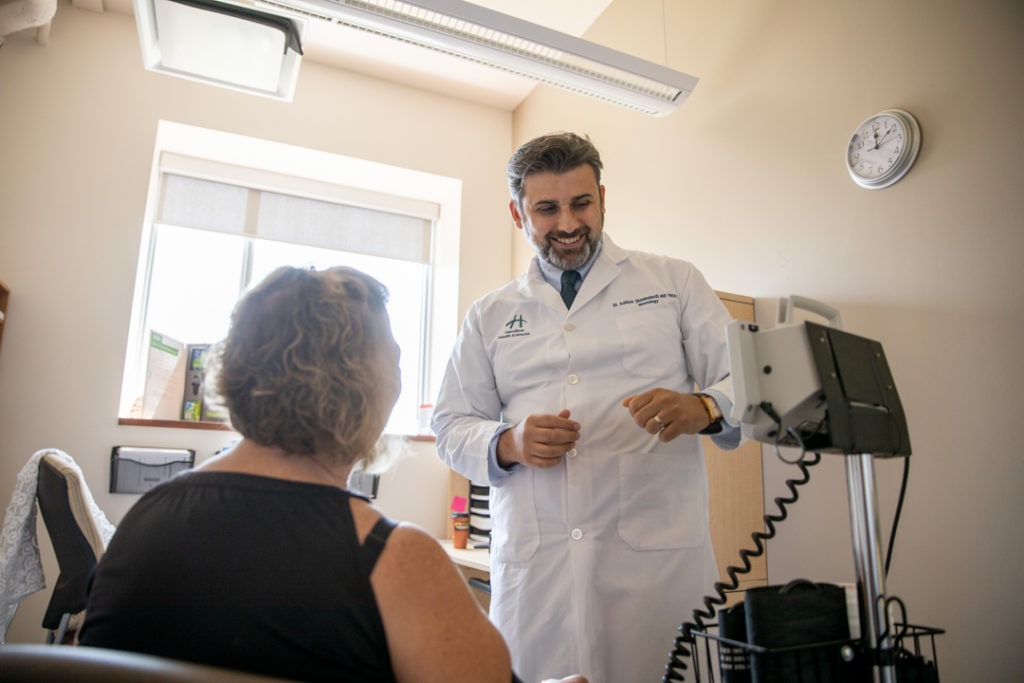 Strokes have become the number one cause of long-term disability among Canadians. As our population gets older, it becomes more prevalent. As a research scientist, Dr. Ashkan Shoamanesh devotes most of his time to understanding the impact strokes have on people. Particularly those arising from bleeding in the brain.

“Our team is trying to find the best way to prevent and treat the most severe, but neglected, type of stroke—hemorrhagic stroke,” says Ashkan, who is based at the Population Health Research Institute (PHRI) at Hamilton Health Sciences’ Hamilton General Hospital campus. “I started looking at small brain bleeds detected only on MRI as a resident. Then during my fellowship training this interest grew – ‘literally’ – to large brain bleeds that cause stroke.”

Studying stroke neurology was an early attraction for him.

“It was an eye-opening experience for me to see the significant benefit we can provide to stroke patients early on in my training.”

“I think I was attracted to stroke neurology because we can administer medications that quickly reverse or prevent severe disability,” he says. “It was an eye-opening experience for me to see the significant benefit we can provide to stroke patients early on in my training.”

That experience turned into a full-time career focusing on health research, which has now earned some serious accolades.

This year, Ashkan received two major awards including the American Heart/Stroke Association Robert G. Siekert New Investigator Award. It is an international award that recognizes the most promising young investigator in his field. Globally, it is often referred to as being among the most prestigious early career awards in stroke research.

Ashkan was recognized for leading a sub-study within a PHRI-led global trial to see whether stronger blood thinners that prevent strokes can be used safely in patients who show small areas of bleeding in the brain on an MRI scan.

Strokes have become the number one cause of long-term disability among Canadians.

His conclusions verified that patients with small areas of brain bleeding respond similarly to strong blood thinners as other individuals, reducing patient safety fears in the medical community.

“It made a contribution to emerging global evidence that reassures concerns about the use of blood thinners in patients with heart disease or stroke who have small brain bleeds or ‘micro bleeds’ on MRI, thereby improving stroke prevention as a whole in such individuals,” says Ashkan.

In addition to his awards, he is the chair holder of the Marta and Owen Boris Chair in Stroke Research and Care funded through the Hamilton Health Sciences Foundation.

The study involved thousands of people in 32 countries. It was the first randomized sub-study to look at hemorrhagic stroke risk with the use of strong blood thinners (anticoagulants) relative to aspirin (mild blood thinner) in patients with brain micro bleeds.

The second major award he earned this year was the Heart and Stroke Foundation Henry JM Barnett Scholarship. This is a national award for the highest ranked Canadian National New Investigator in cerebrovascular disease research.

It recognizes the Hemorrhagic Stroke Research Program that Ashkan developed at the PHRI, with particular focus on a global trial he leads.

The group investigates the best way to prevent strokes in people who previously had a large bleed in the head, who require strong blood thinners to prevent clotting-related strokes from a common heart arrhythmia, called atrial fibrillation.

Ashkan and his colleagues at PHRI conduct some of the most high impact stroke research in the world.

Most physicians incorporate research into their schedules. But it’s always a balance between that and their medical practice.

“I find my clinical work to be quite rewarding; it highlights and drives my research,” says Ashkan.

Ashkan is most interested in large clinical trials. He and his colleagues at PHRI conduct some of the most high impact stroke research in the world.

“I love being there for my patients, supporting their recovery,” he says. “And on the research side, what I enjoy most is to get together with like-minded people from all corners of the world as we work towards a common goal.”

Hamilton Health Sciences | @HamHealthSci - June 29
Would you know when someone is having a stroke? By knowing the FAST signs you could save a life. #BeatStroke… twitter.com/i/web/status/1…
Ways to Give