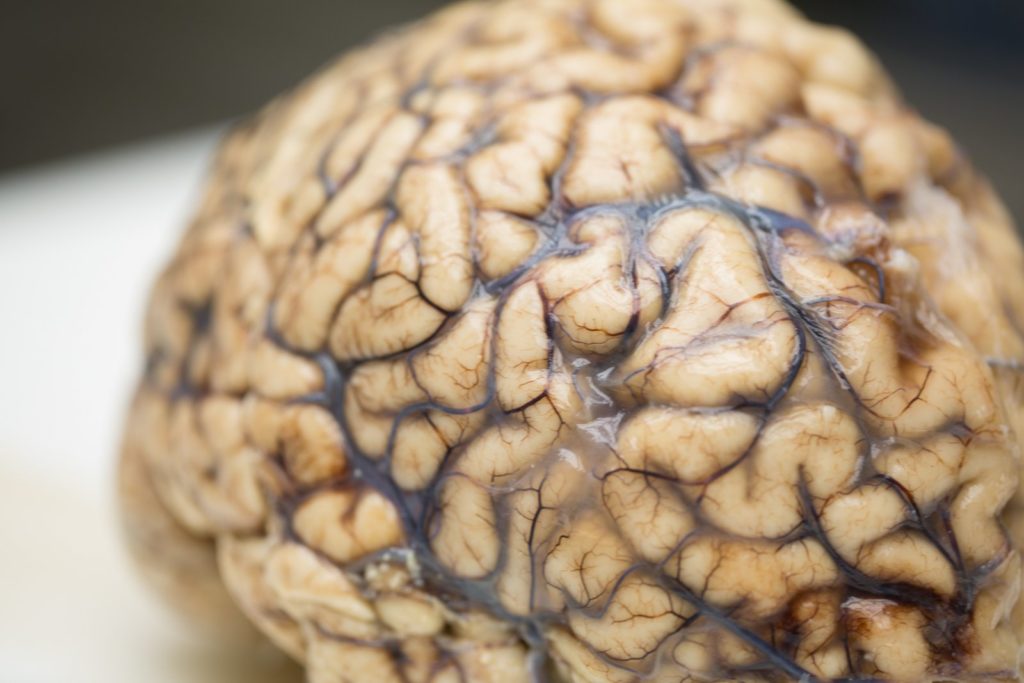 What started as a regular workday for daycare provider Julie Buitenhuis drastically changed when she fell to the floor having a seizure. The 22 year old from Norfolk County had never had a seizure before, had no family history and no known health issues.

The seizure lasted six minutes, a long time for someone with no history of seizures. Julie’s coworkers called 9-1-1.

She blacked out during the seizure, but shortly after Julie regained consciousness, she was on her way to the local hospital. She was confused and disoriented, and worried what had caused it. They began to run tests, and her worst fears were confirmed. The CT scan showed an unknown mass in her brain.

“All I could think was that this couldn’t be happening to me,” says Julie.

She was referred to Dr. Bill Wang, a neurosurgeon at Hamilton General Hospital. He confirmed the mass was in fact a palm-sized brain tumour. Julie was lucky they found the tumour when they did, as that area of the brain is tolerant to change and would continue to adapt to the tumour’s growth. Left unchecked, the tumour could have pushed further into important parts of her brain, causing lasting damage.

“Since Julie is young, the chances are higher for the tumour to return.”

A surgery on the horizon

The tumour needed to be removed. The problem was its location, directly beside the motor cortex of the brain. This area controls a person’s movement.

When removing a brain tumour, it’s important not to damage the surrounding tissue. Small amounts of tumour are left behind so the neighbouring brain matter isn’t destroyed. This was especially important in Julie’s case to ensure she kept all motor function. However, since her tumour originated from within the brain, leaving even small amounts could allow it to eventually grow back. It was best to take out as much as possible.

“Since Julie is young, the chances are higher for the tumour to return,” says Dr. Wang. “In order to give her the best possible outcome I wanted remove as much of the tumour as possible. So, I suggested to Julie that we perform an awake craniotomy,” says Dr. Wang.

This meant that Julie would be sedated unable to feel her scalp, but would be awake while Dr. Wang removed the tumour.

“I wanted the tumour gone by any means possible!”

“While mapping out the line between the motor cortex and the tumour, I would be able to ask Julie to move her limbs,” says Dr. Wang. “This allows us to safely take out more of the tumour than if the patient were fully sedated.”

“Even though I wouldn’t be able to feel the surgery, the idea of being awake terrified me,” says Julie. “But, I wanted the tumour gone by any means possible!”

In preparation for the surgery, the operating team asked if there was any specific music she’d want to listen to that would help ease her nerves. To their surprise, she said Cardi B.

“I wasn’t sure they’d actually play Cardi B, but when they were ready to begin the surgery, they cranked it up,” says Julie. “On top of that they let me watch my favourite TV show from a phone. They really did everything they could to make me feel comfortable.”

The surgery went extremely well and she was able to go home the next day. She experienced minor, temporary weakness that is expected after this type of surgery, but it didn’t last long and her incision is now fully healed.

“we were able to remove almost all of the tumour”

“Julie was the ideal candidate for the awake craniotomy and despite how nerve-racking it can be, she did great,” says Dr. Wang. “As we had hoped, we were able to remove almost all of the tumour.”

Although Julie will need lifelong checkups to monitor whether the tumour grows back, there are no lasting effects from the tumour or the surgery.

“It has been a scary experience, but I think back to the day of my seizure and realize it could’ve been so much worse,” says Julie. “What if the seizure had come a few minutes earlier when I was driving to work?”

“Despite all that’s happened, I consider myself lucky. Plus, not many people can say they were awake during brain surgery and were well enough to go home the next day.”

Keep scrolling to view images of Julie’s tumour. Warning: some people may find these graphic.

Below is a photo of Julie’s brain after mapping the motor cortex. The letters identify the following areas of motion: To most people, the tumour isn’t noticeable so below is the same image with the tumour identified. Hamilton Health Sciences | @HamHealthSci - July 3
With the MyChart app and website you can see your upcoming appointments and get reminders before your visit. Learn… twitter.com/i/web/status/1…

Hamilton Health Sciences | @HamHealthSci - July 2
#DYK: Not all medical concerns require a visit to the emergency department 🏥. Visit NeedADoc.ca to lear… twitter.com/i/web/status/1…
Ways to Give