About the HHS Volunteer Association

The Hamilton Health Sciences Volunteer Association (HHSVA) is a non-profit organization operating retail businesses and parking services across the HHS family of hospitals. All profits generated are donated to enhance patient care through the donation of critically needed patient care equipment and program funding. With over $80 million donated since 2015, we are proud of the contributions that we are able to make each year through our excellence in retailing, business innovation and organizational integrity. Special thanks to our customers who make these contributions possible. Your purchases truly “make a difference.”

Make a Purchase, Make a Difference®

Thank you for supporting HHSVA shops and services. All profits are donated to enhance patient care through the donation of critically needed patient care equipment and programs. We couldn’t do it without you! Whether you are buying a cup of coffee, a bouquet of flowers or parking your car, you can feel good about supporting the excellence in patient care at HHS.

To enhance patient care and quality of life for the HHS community through the donation of profits from the operation of business services and the recognition and support of volunteers.

The Hamilton Health Sciences Volunteer Association (HHSVA) is committed to fostering, cultivating and preserving a culture of equity, diversity, and inclusion across all levels of our organization.

The most valuable asset we have as an organization is our people. We embrace and encourage our employees’ differences, such as age, colour, ethnicity, gender identity or expression, physical and mental ability, race, religion and sexual orientation as the characteristics that make each of us unique. Together our individual differences, self-expression, life experiences, unique capabilities and talents are an important part of our culture.

The HHSVA’s Equity, Diversity & Inclusion (EDI) initiatives strive to foster a culture that welcomes and supports an equitable work and customer experience for all. From our employees to our Board of Directors, we all play an important role in helping to create a positive environment for all and for supporting efforts that foster EDI across our organization.

Supporting HHS in the Delivery of Patient Care

The role and contributions of the HHSVA across our family of hospitals can be seen in many different aspects of both the services provided and positive impacts of funding. Through the operation of retail, parking and other services the HHSVA supports the patient, family and staff experience at HHS.

Proceeds are donated to enhance patient care in many different ways, including the funding of patient care equipment and programs, support of volunteerism and facilities improvements: 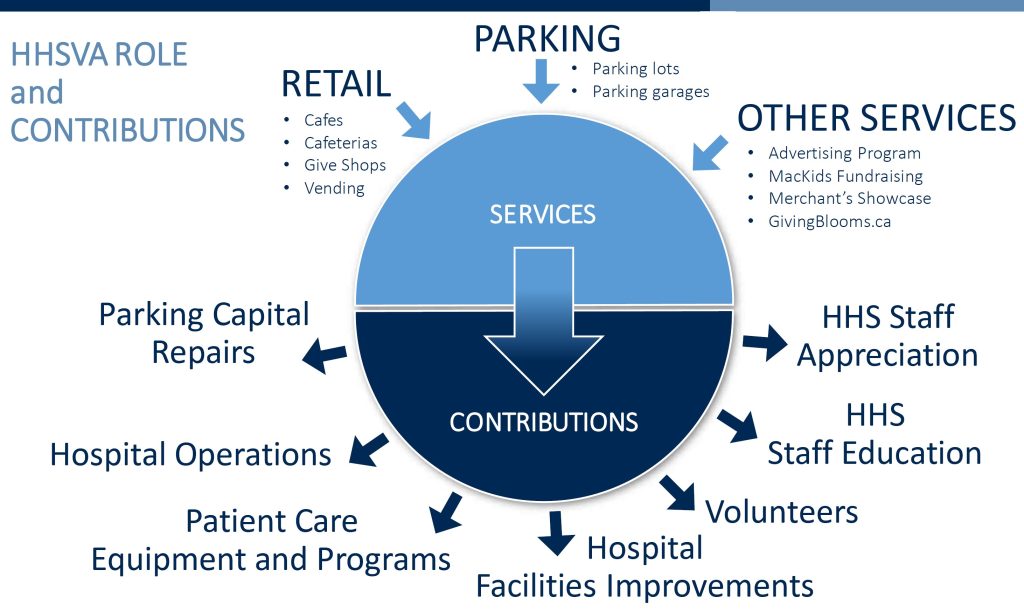 Read about the breadth of supports provided by the HHSVA in the HHS Share story series:

The mission of HHSVA is to enhance patient care. Annually the HHSVA Board of Directors reviews applications submitted by various hospital departments and determines where the funds will be allocated. These profits are in turn, donated to HHS through the purchase of needed equipment and funding for various patient care programs.

Examples of some of the items donated by HHSVA that would not have otherwise been possible through traditional funding channels:

For all one-time requests, applications will be accepted throughout the year but must be received by April 30 of each year for consideration by the HHSVA Board of Directors in May.

These applications are reviewed once a year by the HHSVA Board of Directors. Notification of the status of these requests is sent out in early June.

The Hamilton Health Sciences Volunteer Association (HHSVA) was established in 2000, and yet, its rich history dates back to the turn of the 20th century. The following is a historical overview of the two organizations that were later merged to become HHSVA as we know it today.

In 1971 McMaster University Medical Centre was opened. Under the leadership of Joyce Ralph, the McMaster Medical Centre Volunteer Association was created. Through various fundraising activities, the association accumulated capital and was able to establish shops and services throughout the hospital including gift, flower, barber and beauty boutiques, and coffee kiosks. Similar fundraising efforts by the Volunteer Association of Chedoke Hospital resulted in their expansion with the establishment of another coffee shop in the hospital’s Complex Continuing Care building located on the mountain brow.

Both organizations saw much growth over the next 10 years. The McMaster Medical Centre Volunteer Association expanded to six shops and over 15 employees, while the Volunteer Association of Chedoke Hospital operated seven shops and employed five staff. Both organizations maintained a large presence of volunteers in the operation of their retail locations.

The goal of both the Chedoke and McMaster Volunteer Associations was to promote the welfare of their hospitals and patients by providing supplementary services, comforts and amenities. Funds raised through their various shops and services were used to purchase equipment at their respective sites.

In 1921, the Women’s Auxiliary of the Hamilton General Hospital was established. The Auxiliary, created by a group of 17 women, was formed as a result of the growing importance of volunteers made most evident by the flu epidemic of 1919. The goals of the newly formed Auxiliary were to contribute funds to the hospital, make surgical supplies and garments, and to supply donated clothes to destitute patients. In its first year, the Auxiliary grew to over 51 volunteer members.

By 1962, their membership had more than tripled to 190 members, eight affiliated groups, and 10 church societies. The Auxiliary was very active in the hospital and the surrounding community including the establishment of a summer camp in Burlington for children with cardiac problems and, during the Depression years, the operation of an emergency soup kitchen. In April 1938, the Auxiliary incorporated, elected a Board of Directors and appointed officers.

During World War II, the Auxiliary’s volunteers provided assistance throughout the hospital including a canteen service on the wards to provide relief and refreshments to hospital staff. In 1947, the General Hospital Gift Shop was opened. Initially managed solely by volunteers, the Auxiliary hired their first paid employee in 1952 to assist with its operation. Expanding to the Henderson General Hospital (now Juravinski Hospital & Cancer Centre), the organization opened the Henderson Hospital Gift Shop (now Juravinski Gift Shop) and established a volunteer canteen cart service to the hospital’s wards in 1954.

In 1962, the Auxiliary established a permanent office, staffed by a secretary, bookkeeper and volunteer coordinator. The Auxiliary was granted charitable status in 1968, with its largest contribution in 1970 towards the reconstruction of both the General and Henderson Hospital entrances.

In 1974, the Auxiliary legally changed its name to the Hamilton Civic Hospitals Volunteer Association. By 1990, the Association pledged $1 million dollars to the 5 Star General (Building) Campaign, which included the construction of a new gift shop and cafe. These two retail locations saw further redevelopment and expansion in the early 1990s. In December 1996, the Association donated $500,000 to the ‘Mend-a-Broken Heart’ Campaign and opened the Henderson’s Atrium Café.

Merger of the Hamilton Civic and Chedoke-McMaster Volunteer Associations

Since the merger, HHSVA has continued to grow with the addition of many services across the Hamilton Health Sciences family of hospitals including Parking Services. Funds raised through the various shops, services and parking have generate millions of dollars in donations annually for the purchase of equipment and funding of programs that fulfill HHSVA’s mission to enhance patient care and quality of life for the HHS community through the donation of profits from retail services and the recognition and support of volunteers.

HHSVA takes pride in its many contributions to enhancing patient care, made possible through the successful operation and growth of its shops and services. This success is made possible by the dedication of over 200 HHSVA staff, more than 1000 volunteers and the support of thousands of loyal customers.

PLEASE NOTE: With the safety of our patients and staff in mind, we’re maintaining our universal masking policy. Everyone who enters our buildings must wear a mask. We’ll update our community if we make any changes to our policy, which will be made on the advice of internal and provincial infection control experts. Thank you for your understanding.